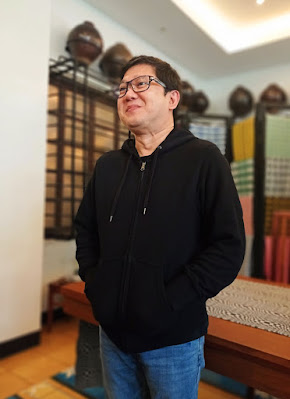 Spent an afternoon in the suburbs of Quezon City for a chance to talk to Senatorial hopeful Herbert Bautista. Who doesn't know the former Quezon City Mayor and the one who reprised the role of several iconic characters during the 80's and 90's, quite popular with the boomers, Gen X, Gen Z's and millenials too. He is "Bistek" to many... and to boot, he's got over 30 full years of experience in public service specifically the workings of local government matters.

During the small conversation, Mayor Herbert lauded the IATF decision to open theaters in the country as this means a lot of workers in the entertainment industry would have jobs again and start making films. He's seen a lot of his friends in the industry suffer a lot, losing their jobs because of the work arrangements just deem it impossible to be normal once again. It just broke his heart to also see people who he's known for years also pass, COVID-19 really has crippled this industry he loves. He sternly hopes that people start to support worthy shows, programs and films to make up for loss time. He's also keen to see how Filipinos would also see the lineup of films at the Metro Manila Film Festival. By the way, her equally popular sister Harlene Bautista and Heaven's Best Entertainment Productions will be putting one called "Huling Ulan sa Tag-Araw" starring Ken Chan and Rita Daniela. The film will also have the participation of Lotlot De Leon and Richard Yap. It'll concentrate on two individuals that will spark romance in the most unexpected circumstances so it'll surely be interesting.

Here's a few minutes of our conversation that afternoon:

Aside from that, Mayor Herbert is running for a Senate seat which is a national post. He's raring to not just file bills for the industries he's worked in but also several things that could push locally produced products in the forefront so everyone could make a living. He's crafted several ordinances that also have benefited the LGBTQIA+ sector and also supports the move to have domestic partnerships. To get to know him even more, he's plannig to put out more personal vlogs to showcase what he loves with Filipino culture, how he adores traveling and share his passion. He's got a lot up his sleeve and hopes by sharing much of his story, he could also get to know more people, places and things he's discovering in the Philippines.

He wants to help, and he hopes you get to be a part of that movement.