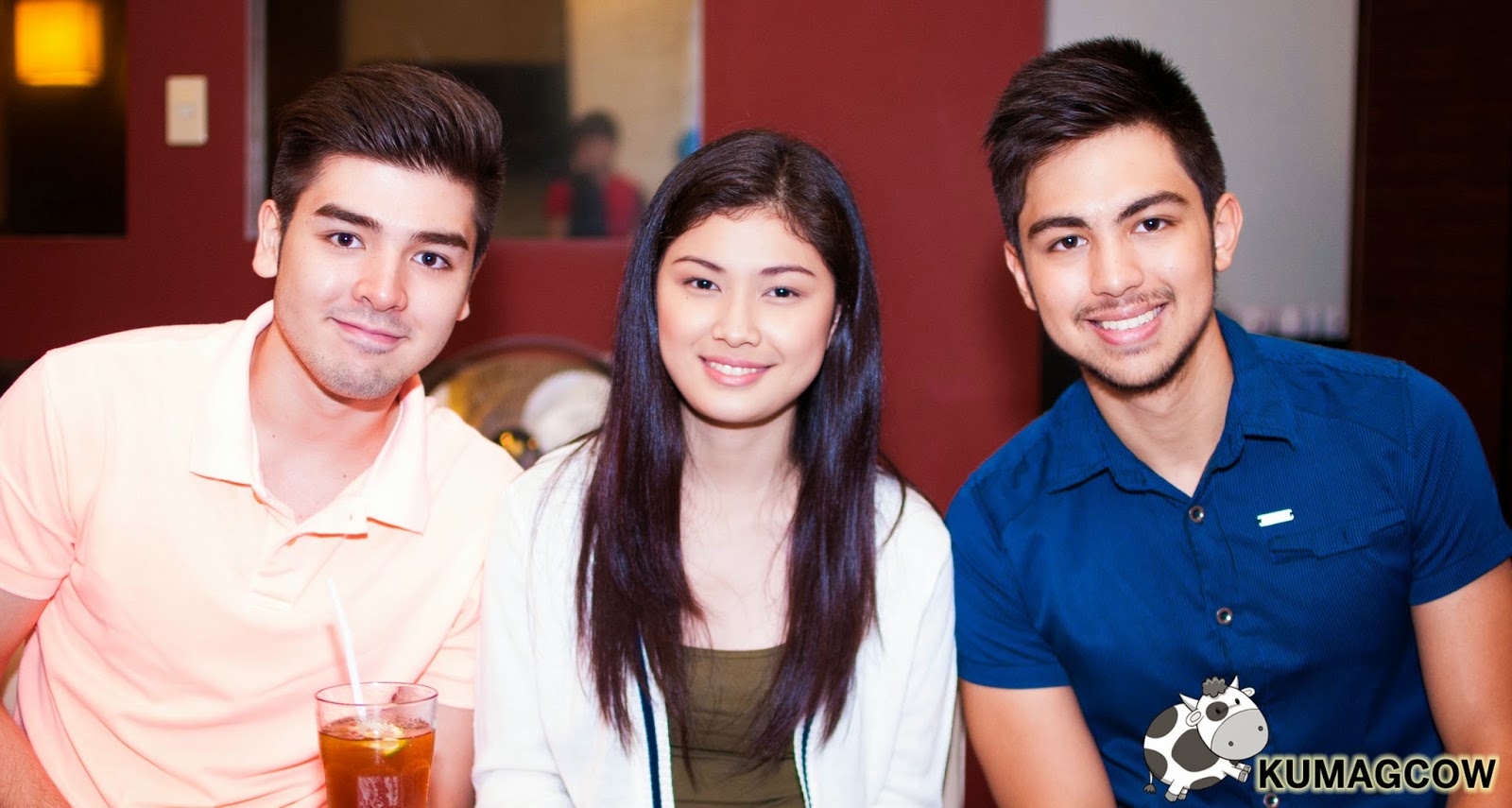 First impressions, Andre is so tall, articulate and very accommodating. He wasn't as shy as I expected him to be as he was friendly and didn't bat an eyelash answering questions. He really thought about each one first before blurting out something. His charm might have fallen in his ability to communicate with a very gentlemanly demeanor which I think comes from his right upbringing. He's starting right and this project will be something that'll test how much he's learned during the small workshops here and there.

Derrick even thought he was going to be a little hard to be with but was surprised how funny this guy is. It even came to a point that the Director Mark Reyes had to put them in different places just to stop them from playing antics against each other. That part failed though because the guys still went to the ladies tents later on. Somehow, they already gelled early in the making of this series. Andre plays Benjie Castillo who plays a college jock who's also part of the basketball team. Rich kid but not an anti hero - you'll probably see their characters have a love triangle and or become a foursome during the story. Find out how complicated that is for him and the sisters. That'll be an interesting take on his character.

Thea Tolentino was simple and pretty. I thought she wasn't going to be effective playing kontrabida because of her more heroine looking persona of which I've seen in Pyra. When I interviewed Barbie Forteza earlier this week she told me they had to learn having her play the role of the other half sister because she is naturally too kind. I love the part where they showcased the characters on teasers; the one they've released recently. With the makeup and all, I didn't even recognize who she was as the person there was more Jean Garcia-ish. That's a complement btw. Her transformation is something worthy to watch out for. Will she be harsh as Ashley Alcantara? Or will she realize how it is to become family later on?! Watch the show of course!

Derrick Monasterio plays Sebastian "Baste" Torres in the series. A not so well off guy who works for the family of the family of Bradley Castillo played by Andre Paras. He goes to the same school as them. Though I think there's a strategic placement of his character and Barbie Forteza's. They are after all a very good pair/love team. Derrick mentions he owes a lot to that and sees nothing wrong if the love team still exists. They look good on screen even if Derrick grows a beard to look a little matured since the part calls or it. Jean Garcia, Jomari Yllana, Ryan Eigenman, Pinky Marquez, Carmen Soriano, JC Tiuseco, Mel Martinez and Carlo Gonzales also completes the cast.

Some of the media people even asked Derrick if he actually had no choice but to veer away from their love team and had to choose a different lady... he mentioned Lauren Young. They had visual chemistry according to their director during a Maynila episode so he's choosing her. He's got great personality and good looks all in one. I don't think there'll be any qualms if he's going to be someone else's leading man. He's that kind of material. He should be in the ranks of GMA's great leading men soon. I give it one or two years.


These guys and gals will give you another show that'll make you laugh, cry and get excited about. Please make sure you watch them right after Eat Bulaga weekdays only on GMA!