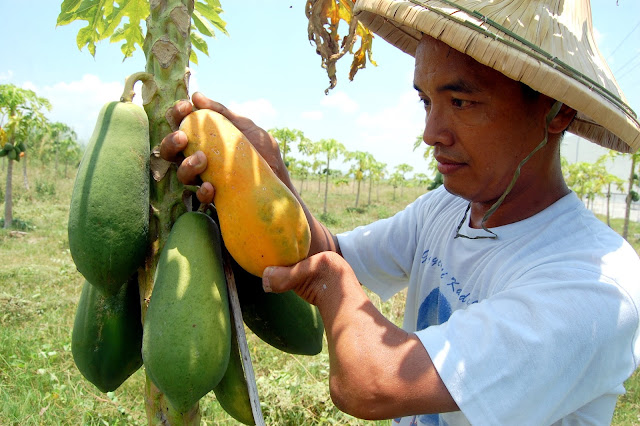 Let's change the mood a bit and read some good news. See the photo above? You're looking at a very inspiring and determined man. His name is Donald Carpo, a man who works as a maintenance guy from SM City Rosales in Pangasinan - a province in Central Luzon. Just like the rest of us, he's got a family too. He's trying to make ends meet, trying to use the little things he earns so he could feed the people at home.

You see, Mr. Carpo suffers from a congenital indisposition in his limbs. He's got his left hand and legs in this predicament but this doesn't stop him from striving hard to provide for his family. So when the opportunity for training arrived, he immediately grabbed it. There, he learned to grow, plant, harvest and sell crops like papayas. His profit went to the welfare of his family, so they could live a comfortable life. The training was sparked by the Committee on Disability Affairs under SM Cares. SM Cares is the mall company's CSR arm. Words seems to have spread of how this program helped Mr. Carpo, so when SM’s project and efforts were recognized by the Asia-Pacific Development Center on Disability, they sent Mr. Carpo as a delegate - and finally made him go to Bangkok, Thailand.

The 2 day workshop was sponsored by United Nations. It focused on Building and Enabling PWD's. Donald says "Even in my wildest dreams I didn't know that I would be able to go to another country. I thought it was impossible because of my condition, but because of SM I was given the opportunity to not only step in foreign soil but also come to a seminar that I didn't think I would even be invited to. We listened to fellow PWD's who talked about how they improved their harvests. I also shared them my experiences here. I also went to learn from different seminars there which I could use further improve the yield of my own crops and share them in my community. I feel so confident now that I'm earning much better every month. Because of SM I have been able to get a decent job. I have been able to get a life changing experience because of them and I won't hesitate to do the same with my fellow PWD's!"

Mr. Donald Carpo definitely feels like he's accomplished a lot. He's been given a lot of opportunities despite of his condition, he has steadfastly proven that hard work really pays off. He's not just going to harvest the fruits of his labor but also share it with his fellow men. Now that is something that we Filipinos must always try to learn from. No matter what the future brings, what ever challenges we see, there's always hope if we are given the chance, the opportunity. I hope other corporations would follow suit and hire more PWD's and help integrate them into the workforce. It's a good thing.

For more information about their organization: