It looks like ABS-CBN isn't losing touch as one of its hit shows called “Huwag Kang Mangamba” has been nominated at the ContentAsia Grants 2021. The show will be butting heads with 4 other propgrams for the Best Show Series/Telefilm made for a Single Asian Market. Winners will be announced on the 27th via a virtual ceremony and will be judged according to relevance and appropriateness as accorded in the ContentAsia Awards’ official site.

For those who don't know, ContentAsia Awards was put up by ContentAsia which covers entertainment media in the Asia-Pacific region. Huwang Kang Mangamba was launched in March 2021 and is about a tale of two sisters, Mira (Andrea Brillantes) and Joy (Francine Diaz) who did their absolute best to fulfill their promise to Bro (Jesus) when he appeared in order to put up a church in their community. They had trouble as their life stories and secrets were revealed and also, faith healers who tried to fool people were in play. It's a bit complicated and people are hooked, invested in the story. 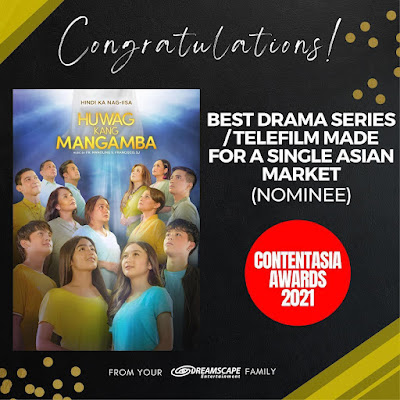 You may watch the series all on the Kapamilya Channel, A2Z Free to Air Channel 11, TV5, Kapamilya Online Live on YouTube, the iWantTFC app, stream it on WeTV and iflix.