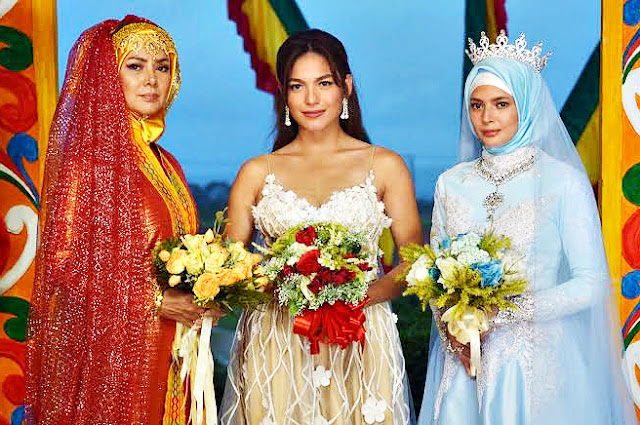 They've been doing good these past few days and with good reason. This is drama, severely cultural and depicts a relationship that isn't much of a norm in conservative Philippines. One man, married to three women, this is a series called LEGAL WIVES. This stars Dennis Trillo, Ms. Alice Dixson, Andrea Torres and Bianca Umali.

We got to talk to the cast a few days ago including Dennis Trillo who plays Ismael Makadatu. In a nutshell, polygamy is something that's a bit of taboo in the country. It's much of a cultural difference really, of understanding how society and these ladies to accept that they can be loved by one man. Aside from that, they're showing a couple of things that are a bit controversial like the harmful "Rido" wherein one clan tries to eliminate the other because of their differences. It will be explained in this series a bit, but not in whole because this isn't a documentary or news item. This also stars Derrick Monasterio, Ashley Ortega, Al Tantay, Juan Rodrigo, Irma Adlawan, Maricar de Mesa, Tommy Abuel, Bernard Palanca, Ms. Cherie Gil, Abdul Raman, Mon Confiado, Shayne Sava, Kevin Santos, indie actor Kiko Matos, Jay Arcilla and Brent Valdez. This is directed by Zig Dulay who also did Bianca Umali's Sahaya in the past.

Watch the show, maybe you'll see how something so crazy like this makes sense.