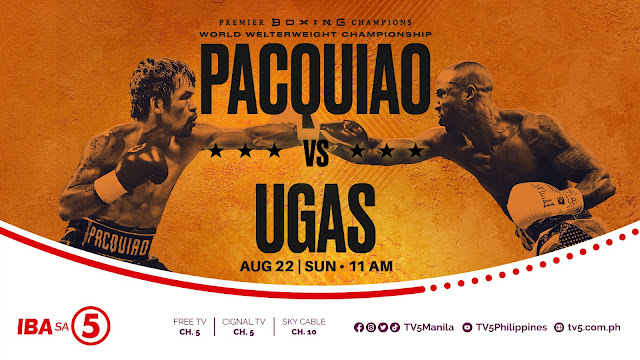 Sports fans won't be waiting in vain as the Manny Pacquiao-Yordenis Ugas WBA Super Welterweight title fight will be aired this coming August 22, that's a Sunday at 11AM on the kapatid network TV5 (Channel 5 on Free TV, Cignal TV Channel 5, and Channel 10 on SkyCable.

TV5 has been bringing you a lot of coverages like the recent Tokyo 2020 Olympics, the Philippine Basketball League, Philippine Volleyball League, the FIBA/Gilas games and a lot more. The Pacquiao-Ugas fight will be held at the T-Mobile Arena in Las Vegas.


Cignal TV and TV5 President and CEO Robert P. Galang says "We know how much every Pacquiao fight turns into a national event and we are one with you in seeing how he would bring pride and honor to the country."

Again, it's going to be broadcasted at 11am on TV5, so make sure you have drinks, snacks and everything else ready before that time. It'll be surely packed since the title was previously owned by pacman, it was only given to Ugas because of Pac's inactivity.

See you on Sunday!