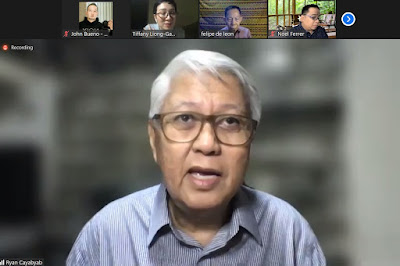 The SUDI Awards will be happening soon. This is NCCA's way of recognizing Filipinos who have outstanding contributions in musical works, creators and artistic exellence.

Noel Ferrer says "The SUDI Awards started back in 2018, later adapted by today's chairman and comittee. The SUDI Technical working group was formed to further push its cause which includes Bayang Barrios, Twinky Lagdameo, Mr. C., Dr. Felipe De Leon Jr. and more. This is multi sectoral. Everyone is part of the creative aspect, this is part of the Filipino music that we enjoy today. The NCCA Awards is a product of creative interaction with other stakeholders. The SUDI Technical working group was formed for this, mabuhay ang musikang Filipino."

Dr. Felipe De Leon Jr. says "We had the technical working group and the NCCA to select from a roster of nominees. It's not just Manila but regional personalities, educators, groups, made dossier for them and then given to the jury. The contribution should be huge, something that moved a lot of artists. We based everything on research, we see how they contributed, their being as an institution, from different genre and chose who have influenced. If they have a huge understanding of their music and given inspiration to others. It should be long term impact."

Ryan Cayabyab says "Choosing awardees are easy, they do standout. The idea is to have one per year, but because of the multitude of people who contribute to the music industry, we see how huge their impact is. The jury will choose in the end, it's going to be difficult in the future years."

Mark Carpio of the Philippine Madrigal Singers says "When the pandemic started, we took a break. People are expecting from us and Filipinos need something that uplifts things, then we received this award during this time. NCCA told us then, we are honored and felt happy that we are being recognized. Maraming salamat po!"

Award winning pianist and PPO's Raul Sunico says "Thank you to the Jury. When I was informed about this, I asked about SUDI awards, and learning about it I have come to appreciate the recognition. We don't perform for awards really, to make music, to make people happy and to make an impact for others. Thank you for recognizing us and our efforts."

Professor Carmencita Arambulo says "I have been teaching music for a few decades now. When I got the notice, I was surprised about NCCA's SUDI awards. I haven't been working for awards really, I have been teaching musical greats, teachers, performers, when I hear how they have done well, I already am happy. They are my affirmation. I will continue to do this, thank you NCCA and jurors. I will still teach the youth so they become excellent in their craft, their character become great, so they become better citizens. These days I have done it online, I have found it actually effective. We need to have great teachers so we get really good youngsters. When they get recognized here and abroad, my heart is full because that is my mission as a teacher. Thank you!"

Tiffany Gabuya of DZFE says "I should begin by saying that, we thought it wasn't really for us. When we read it, we couldn't bellieve it. We have luminaries that received this and getting it, we were just so grateful. Our contribution to music, usually are from Broadcasting. If I'm going to run this station, we are not going to change things, we didn't join any awards since I took over the station. I think, I'm happy to be part of the first batch. The people of heritage, for several decades, we're special and we're going to treasure that. We are thankful for the NCCA for the award, even if we don't get one in the next years, you have acknowledged us today."

Noel Cabangon says "Getting this gives me comfort. I am happy to give what we have for the industry and other artists, I am thankful for receiving this."

Chino Toledo says "Getting the email I got a little surprised. I saw the other awardees, and it wasn't a joke. The head of comittee was Ryan Cayabyab and saw the list seeing everyone I knew. This shows focus on years of making music, we're not stopping there. We don't make them for awards but being recognized made us feel someone is looking at it, someone is hearing it."

Gloc 9 says "When I see email, I don't usually read it. When they told me, I was super happy that it came from NCCA. I know how meticulous they are in choosing people, this just proves how we can make our own waves to be able for other people to see our work. This trophy will be really memorable for me."

By the way, Leo Abaya made and designed the awards for SUDI Awards, but he passed a few months ago. I'm so glad artistic excellence is being recongnized especially in a country that has been known for talent like us. Make sure you see the actual awards night in two parts on August 21 and 28 at 7PM on the NCCA Official YouTube channel. It'll be something good for the soul.