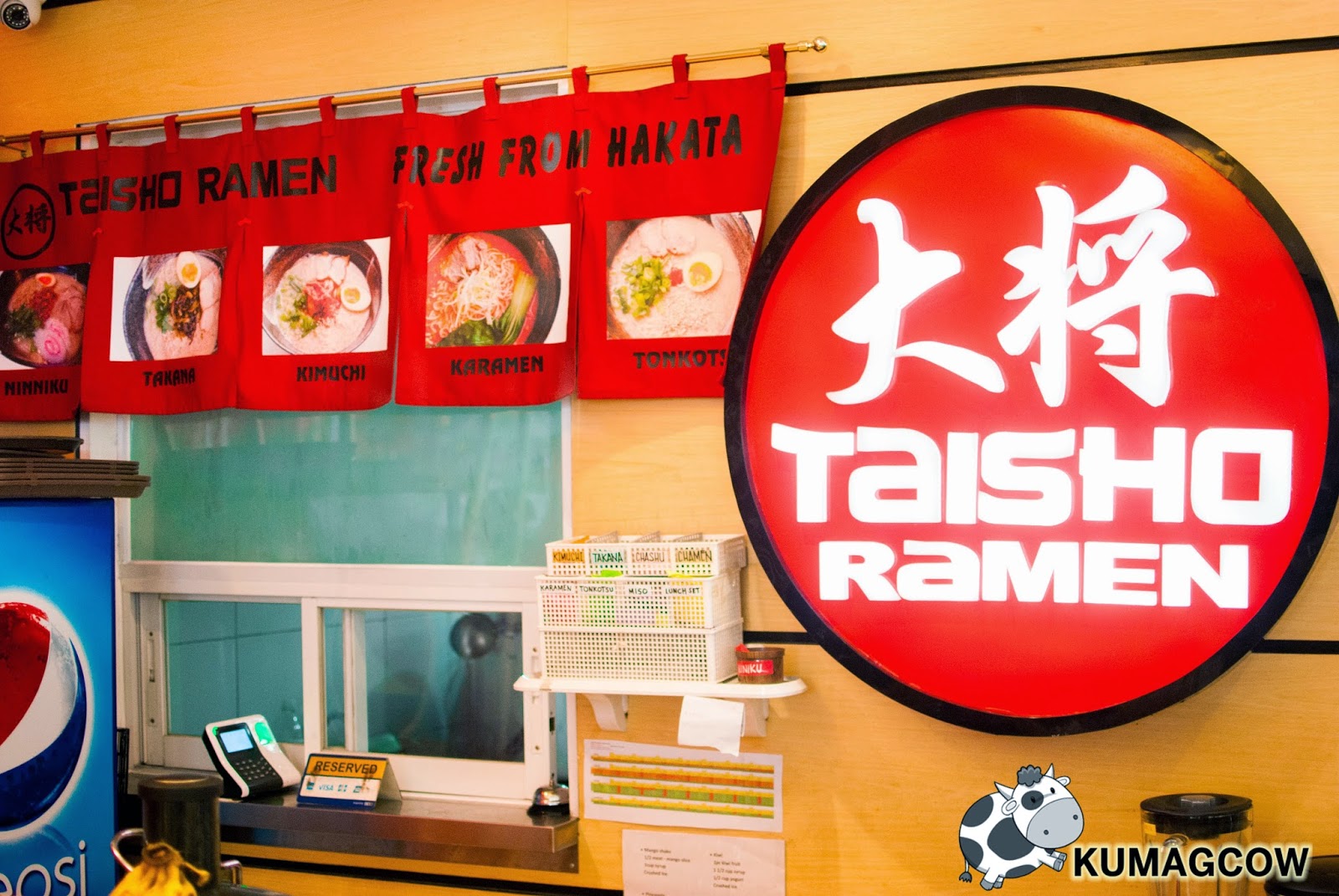 We ventured a little bit North the other day to get a taste of one of the popular ramen places in SM North Edsa's Sky Garden. It's called TAISHO Ramen and Teppanyaki House. The reason I'm telling you that it's popular is because I haven't eaten at this place yet because when it's lunch or dinner time, the place gets filled to the brim and there are often lines outside wanting to get the chance to taste their authentic Japanese - Hakata origin Ramens (from Fukuoka Prefecture). They are also proud of their Teppanyaki dishes of which most are cooked and done on a hot plate just like the Japanese do.

They have set meals and this one on the left is the Karage, served with Chahan Rice and Pork Bone based soup on top. It's pretty good and affordable even if you purchased them ala carte. If you are fond of watching Anime or Japanese films, you might have already seen the Onigiri. It's rice shaped into a triangle enveloped with a strip of seaweed and sprinkled with roasted sesame seeds looks absolutely delish!

Kids in Japan often have this for lunch and take it away for school or even the office when they're a little older.

Then I got my bowl of Ramen.

This is the KARAMEN. It's one of their best sellers. The color itself had me salivating because it seems to signify how spicy it is. Actually, they've got 3 levels of it, Mild, Spicy, and Deadly. So I chose the Deadly one because I adore everything spicy. The verdict? I wanted it MORE spicy. They've got Cayenne Pepper on the table so I just sprinkled that and voila! The perfect bowl of Ramen. The options are really good and the broth is something of legends. It's not the soupy type of broth at all because it's so thick. Have this hot bowl on a rainy day, and it's an unbelievable. Seasoning is perfect and the thing is, I absolutely loved it! This is my bet for the best bowl of ramen if you are looking for pork bone based ones. This one is tops.

Taisho Ramen and Teppanyaki House wants you to create your own perfect bowl of Ramen. They also suggest you get freshly crushed garlic on your broth once that it lands on your table. I must say it made the broth more whole but it can actually work without it (which I prefer). This is a free world and you can do the perfect bowl with what you want to as ingredients. The Cayenne/Japanese Hot Pepper powder might be too much for some but I love the fact that they put it out there so if you dig the more spicy version of what's on your dish, then it's an easy fix!

The Ramen noodles is hand made and the recipe is the same as what they authentically have in Japan. It's made fresh in their own kitchens and it gets delivered to their store everyday. It's springy and perfect for the broth they whip up in this place. They only have one branch though, but they are thinking of expanding the business more in Metro Manila then in major cities later on. It's a little hard getting the perfect space these days and they're definitely ready for it. I also heard they're planning to add more items on their menu but with the ones I saw during that afternoon, all good.


They have a few items on their menu that are part of their Teppanyaki choices. Chicken, Tonkatsu, Burger, Pork, Spare Ribs, Beef, they've got it all! So if you want something hot off the plate, you can ask the people at Taisho to make them for you ala carte or have the sets.

We even talked to cute and bubbly Angel Satsumi, one of the stars of Pepito Manoloto and other GMA shows who joined us for lunch as she told us her favorites in Taisho Ramen and Teppanyaki House. She even recommended other Ramen variants which some of the other people in the table I was with really loved.


Vegetarians would definitely also have a treat having this real deal Tofu Salad. It's nutty dressing and fresh veggies take a couple of strips of seaweed thingies on top that makes an illusion that it's still alive. Of course, it's something that I'd also recommend to people who watch their weight. If I were you though, I'd rather have the Ramen bowls. :)

The Gyoza will always be a staple at any Japanese restaurant and they have a more thin skin, up easy version of it. I guess it's one of the affordable ones as well. Please have it with your ramen at least if you want more proteins than the slivers of pork that it already has.


The Spare Ribs were something also good. I prefer to have it with hot white rice. You can opt for the Chahan that they already have on the menu but the white rice would prolly make it feel less oily. I love the spicy kick and the serving is ample for two or three depending on your appetite.

Their Tempura version is good. They have thicker batter, and the shrimp isn't fake or halved like I see in some restaurants. That's good news. The tartare sauce had some chunks of pickles and it gives a tangy, garlicky spin on the tempura... so it's not just soy sauce in this joint. That's new.

Another healthy choice is this drink. It's Aojiru Wheatgrass. Tasted good in my books and if you're a little adventurous, this would be perfect. It might also be something that I think can work to extinguish those hot dishes I mentioned a while ago. Refreshing and still real.

For desserts, this one's a hit especially my favorite the Strawberry Kakegori. It's a near relative of our own native Halo Halo but it's got the syrup and condensed Milk only. The Peach and Grape would be a close second but for those who would want something more extravagant, get the Macha.

It's the perfect sweet ending to our visit to Taisho Ramen and Teppanyaki House. The beans, the green tea iced bed it lies on is something worth the visit.

Oh and for kids, get the Chicken Teriyaki which is on the sweet and savory side. I liked this one with rice of course!

Oh and before I forget, please don't forget to drop by Taisho Ramen and Teppanyaki House on their first year anniversary celebration slated from September 8-10 this year. They're taking 50% off on all Ramen dishes on the spot and you'll see why I so love their broth. Remember the date, we'll try to be there also to experience it first hand. It's like 2 for the price of one so if you're on a date or just want your family to join you and get their own ramen bowl, come over to SM North Edsa's Sky Garden and see what it's like to have TAISHO RAMEN and TEPPANYAKI HOUSE experience mall hours, see you!

Taisho Raen and Teppanyaki House
Posted by John Bueno at 3:18 AM