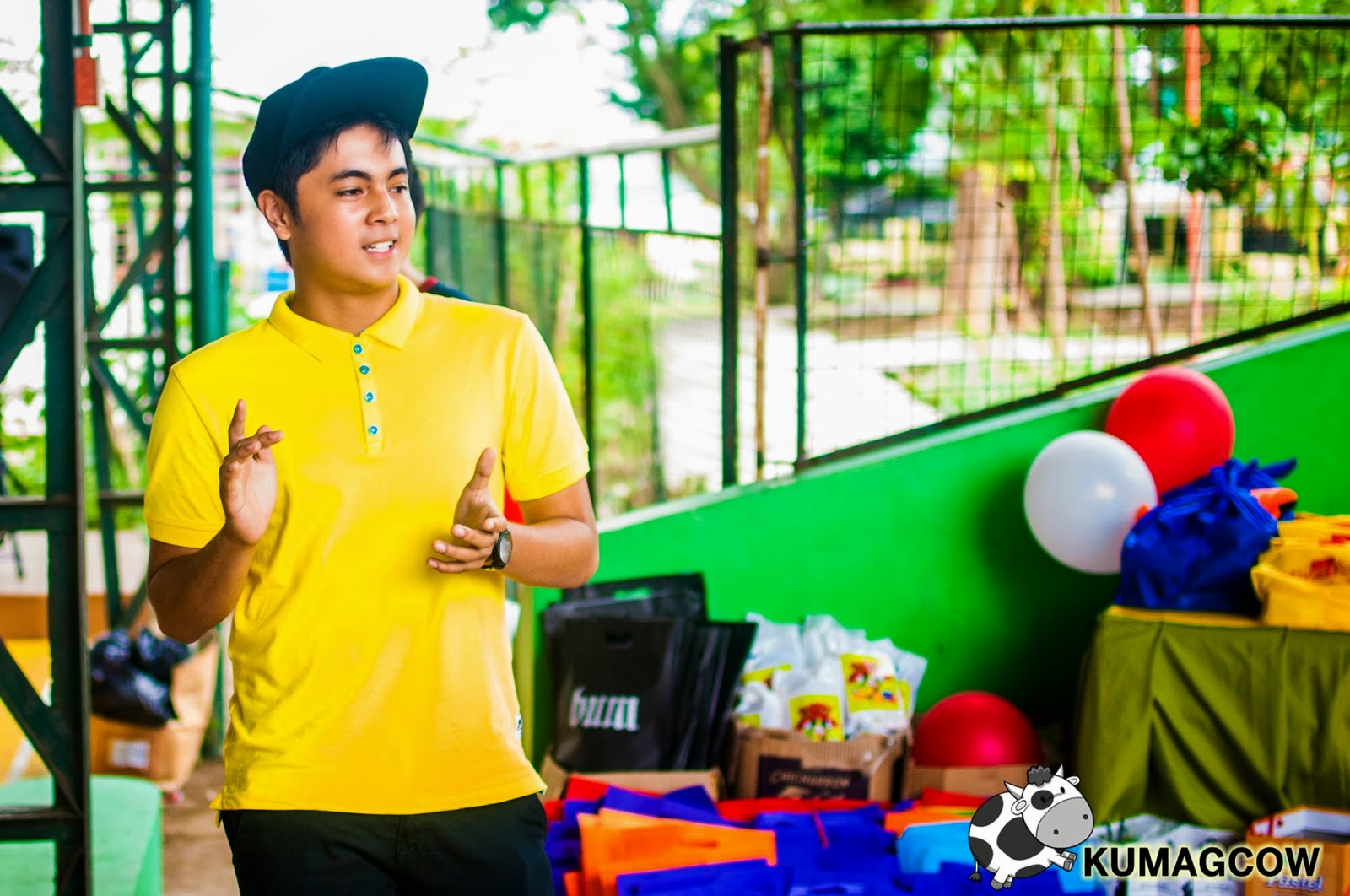 Yesterday, we went all the way to Dasmariñas Cavite to visit a publicly funded Dr. Jose P. Rizal Elementary School. It's right off the beaten path of Cavite which is very near Technological University of the Philippines in Dasmariñas. The school offers the regular Elementary curriculum and Special Education courses designed for kids that are differently abled or with special needs. We're here to celebrate the birthday of one of GMA's prized possessions and star of Niño, actor Miguel Tanfelix. His show battled with a real tough one over at the other channel but his show really held up mainly because the story was new and who wouldn't love an adorably guy playing it right? He chose to celebrate it with special people because just like his show, the cause somehow is really close with him. Other than that, it's worth the trip to his hometown because he lives quite near the school. It's his birthday but he wants to be the one to give gifts to the kids. Isn't that sweet?

The kids, their teachers, some with their parents and family patiently waited for the program to start. This is one of the few public schools that have special education facilities. It's not often that it happens and they're more lucky because even if it's not in Metro Manila, they have this.

The kids had so much fun going up on stage and playing some games with Miguel Tanfelix. His best friend who is also part of the show Renz Valerio came along to show his support. We talked to him after the show and he told us how important it is for him to be here. He's not just a friend while on cam but he makes it a point to be there for Miguel more if he's doing things like these off cam. He knows how kind hearted his friend is and he wants to be there in important occasions.

It was also nice to know that when Miguel, Renz and host Tess Bomb asked them about Niño the kids really do watch the show. They can't express the joy they had when they saw the smile on the kids faces. It was priceless. The two also went on stage and gave the kids a treat by dancing a few, even the kids outside were shrieking seeing these teen stars.

Speaking of surprises, the most amount of screams went in when Miguel Tanfelix's partner in the series. Bianca Umali called in to say Happy Birthday via phone patch and everybody got to listen in to their conversation. You can see the amusement of Tess Bomb during this "kilig" moment.

Renz went ahead and did another number then Miguel went in and joined him. These guys were really having a great time entertaining the crowd. Even when they were goofing off sometimes, the kids and their friends loved their antics. Renz even went down and danced with them with some of this year's hits.

Miguel the birthday boy sang a few songs and went into the crowd. I saw Renz and Miguel had some scratches because they got hugged a couple of times by the kids but they didn't mind as long as they were happy.

Thank you so much to Miguel Tanfelix's sponsors who gave away some goodies. GMA Artist Center, BS Mobile, BUM, Active White, Sundance and Monreo Biscuits. The toys, school supplies and products you gave them surely did put a smile on the students of Dr. Jose P. Rizal Elementary School.

It was hot that afternoon but they didn't mind because they're getting more than what they wished for when they saw the students giving them a dose of their own medicine. The special kids together with the nurses and care givers performed for them too.

Miguel joined them and his Manager Vic Del Rosario thanked everyone who made the event possible. He also thanked the sponsors for their generosity and hopes they still continue to do this in the future. He also thanked the teachers, the Principal, the care givers and nurses who helped facilitate the event... he lauded them about the good things they did that afternoon and hope there would be a few more events like this in the school that they could do.

Renz Valerio is a good chap. He says it's important for him to be there not just because Miguel requested him to be there but he believes in the good things that his best friend does. When asked about his next projects, he said he didn't have one yet but will concentrate more on his appearances in Sunday All Stars. He's a very spirited dancer and he didn't just dance like other stars do, he did it with conviction. He can give some of the veterans a run for their money and he wishes to have a project before the year ends. He's also happy that he still gets to work with his best bud after all these years and wish him well. He knows Miguel will be very successful because just like him, Miguel is a good guy.

With good looks and a can do attitude, he's going to be even more of a star than he is right now. We've learned a lot about him and his role in Nino but seeing him in other roles would be something refreshing on screen. I hope they also do something with Bianca Umali and their pairing, they look really good together especially on the BUM endorsement they got recently. I'll show you some photos of that too soon.


Happy birthday Miguel! Hope you had a grand time with the kids! Thank you also to GMA Artist Center for having us tag along that afternoon.