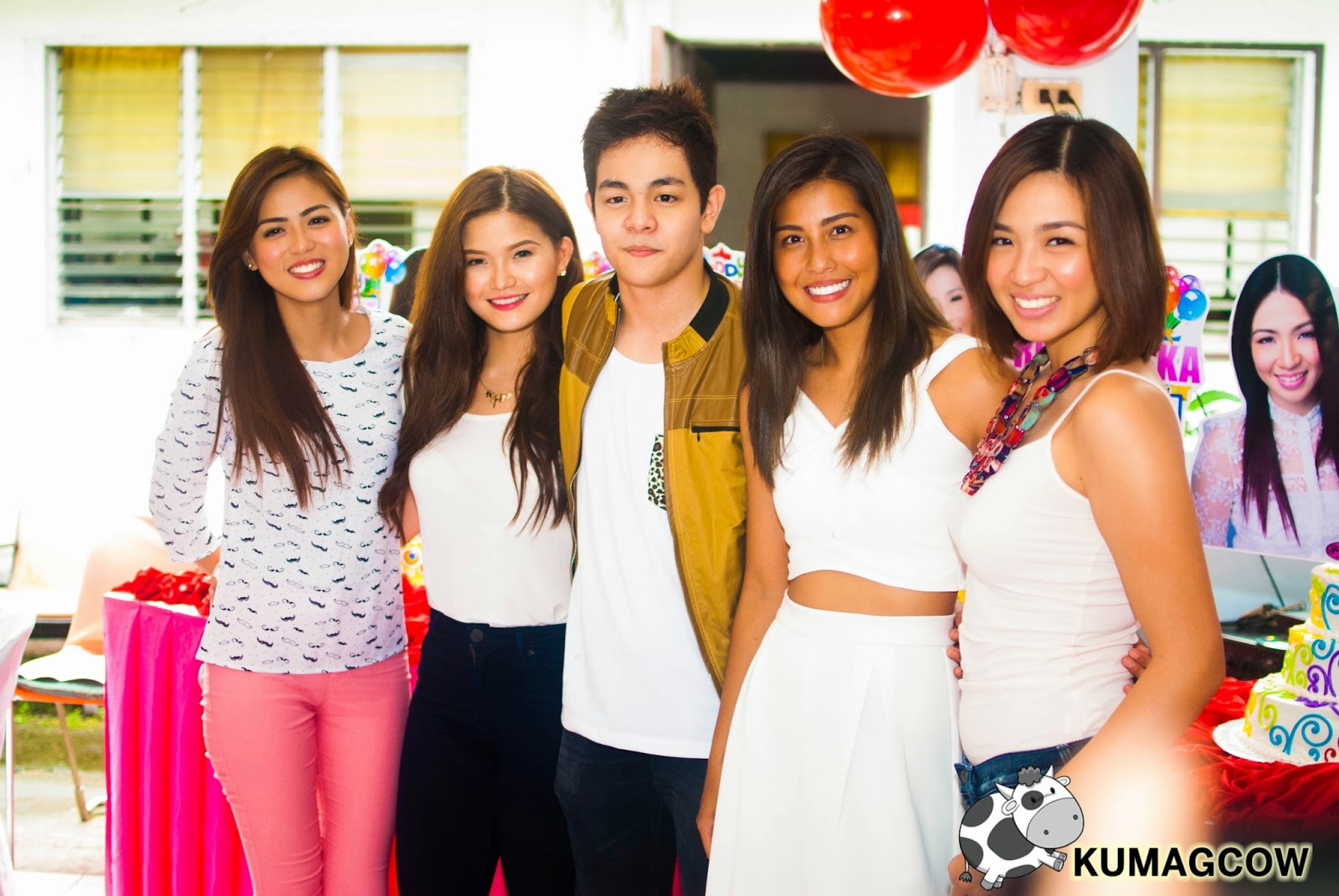 We celebrate our birthdays in different ways, some intimate, some really good ones especially if your goal is to share your blessings with other people. That's exactly what the September birthday celebrants from GMA Artist Center did a few days ago at the Graces Home for the Elderly at the back of SM North Edsa in Quezon City. Francheska Farr, Arianne Bautista, Maricris Garcia, Rita De Guzman, Mayton Eugenio and Julian Trono pulled up their sleeves and got their hands ready to give a few hours of entertainment and enjoyment for the Lolos and Lolas of Graces.

Francheska Farr and Maricris Garcia presented song numbers and of course the elderly folks loved every bit of it. Some even joined them and even participated during the event. I remember distinctly one Lolo singing a whole medley when we thought it was just song. It was hilarious but we really had fun! Arianne Bautista on the other hand hosted the event with Tess Bomb. Their antics made them laugh all throughout the program.

Lots of their sponsors also chipped in so that in their birthday, they would be the ones to give gifts to the elderly. If you could only see the smiles on their faces that day, they really had fun!

The artists also went to them and gave them food while the others performed during the event. Which goes to our next artists, Julian Trono and Mayton Eugenio.

These guys are really spirited dancers, mind you it was wet in that area but they could still dance like they were in Sunday All Stars that afternoon. They also helped distributing gifts to the elderly afterwards.

They thought it all ended there but the elderly folks in the center actually gave them a challenge, they danced with them in front of the other folks too! Just look at Lolo and Julian on this one!

Then Rita De Guzman arrived later on in the program. She just came from school that afternoon and had to go back also because she's still finishing her studies. It was also her exams so she couldn't skip that for the event. When she arrived, she also sang a tune or two and gave away gifts from her sponsors as well.

They all thanked everyone for the opportunity to have been able to share their blessings with the elderly folks at Grace's and promised that it won't be the last time that they'll be doing that. They were so happy to see that even if they spent only a few hours in the home, they all had fun in spite of their condition.

We got to sit down and talk to Julian Trono after the event and he said "For the past years, I was always surprised by my family but this year I didn't get one, but that was okay as we did it simply and had dinner with them. This year I am part of Jake and Bea's movie "Liwanag sa Dilim" so I celebrated there instead, quite simply with a cake. My studio started last year as I have been involved with dance communities because there wasn't much training locations in Quezon City. I was just the right time because I had a partner who was in the construction business too. It was risky but I had my folks with me, they taught me how to manage and market the business. I am still young, but they helped me make it successful. The place is a little overpriced and we want a bigger venue so we had to close that down. I was only 15 when I opened that. At this young age, it's not really a business for me but just as long as I can cover the expenses that's okay with me. There are coaches and some other teachers that helped me with the classes. I am still studying film in MINT college at the Fort. It was stressful at times but once I open a new one soon, I'll be surely ready to open it hopefully this year. So stay tuned for that! I am very happy to have been able to celebrate with the elderly today, it made my birthday very special than what I thought it would be."

Rita De Guzman on the other hand has already been in Graces, she used to regularly go here to also share her blessings. She says "It's kinda sad to go here because I don't seem to see some of the other people that I used to see in the shelter. I also go to other places like PGH when I can. We are still shooting "Strawberry Lane" and are trying to catch up with the episodes. So far we've heard very positive feedback about the ratings and hope we continue to please the public and our station. I'm not sure if we have gotten to equate the ratings for Nino but as long as we can present a good show and know how to touch the audience, as long as the story and the actors are good, as long as we can do the show right and upto standards it's all okay for me. It's my first time to work with some of the actors in this show, like Sheryl Cruz, TJ, Christian, Kim, Joanna, Kiko and Jeric. I've already worked with Ms. Shine since we have worked in the past. I'm so happy because we got to bond a lot with her since it's motherly love I'm after. I'd be able to enhance my acting skills because she does really give advice. As for my music career, it's still going out before the year ends. We're not rushing, we're planning to have around 10. I'm a little busy with work and school so I might have to finish that first before we work on the album on some days. With the event, I have fond memories of my grandfather and grandmother. We were not that close because I had a cousin who got left by her mom at a young age I understood that she needed the attention of my grandparents. I'm very emotional because I needed love like that. I usually just get it out with songs, I'm happy singing for them and talking to them. With love life, I don't have one. Though I have a lot of crushes especially with Dennis Trillo. There are a lot of guys courting me but I want to be friends with them first. I'm going to concentrate with my album, anyway I'm not in a hurry. I'll get there in time. I want to be ready for that though but I'm happy since we still have a target date for the launch. I had a simple birthday celebration and spent it in an orphanage near my home. A mass, procession, it was all good in a day with friends and family. I always want things simple. Oh I have to go back to school later, I still have a lot to do today. Thank you!"

Special thanks also to Tou Le Jours Philippines (http://www.tlj.ph) who gave away really good bread during the GMA September celebrants event. I had a bit and it was so good so if you want to get really good bread with really good fillings like the one they gave away that afternoon, please go visit their stores nationwide too! To know more about them, like them on Facebook https://www.facebook.com/touslesjoursph.

Thank you so much to their sponsors, GMA Artist Center who arranged and made this all possible. I'm sure the elderly people from the center loved everything that you have prepared for them. This meaningful birthday celebration would really be remembered by the artists, and the Lolos and Lolas we were with that afternoon. Bless you guys!