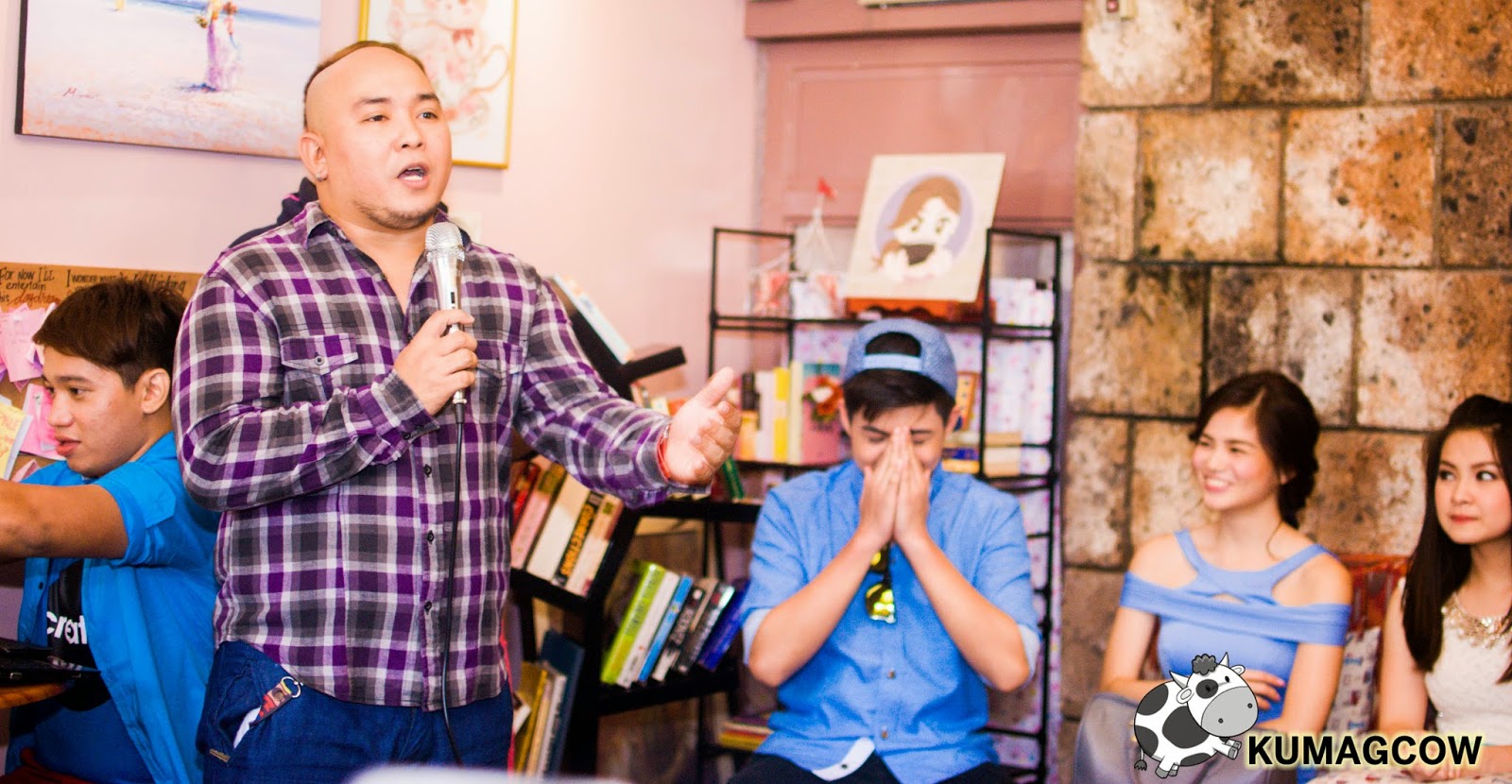 We spent a quaint afternoon with the cast and crew of up coming film Saranghaeyo #EwanKoSau during their story conference at the Belleville Cafe in Scout Tobias in Quezon City. It's an independently produced film but will be released mainstream by Bagong Buwan Artist Collective (New Moon) and Directed by Roman Perez Jr. It's also written by Palanca Awardee En Villasis.

As you can see, this one's pretty mixed. Artists from different channels like ABSCBN, GMA and TV5 comprise the stars of this movie and it's not often that this happens. Imagine Jon Lucas, Barbie Forteza, Francis Magundayao and Elisse Joson in one project, that just won't happen in normal circumstances but the stations were nice enough to allow them to do this and Director Roman Perez Jr. is really happy about the outcome of their dialogue with the networks. It was hard but when they told them the story and what they wanted to achieve the network wars didn't seem to be an issue at all.

The producer herself says she is taking a gamble at this because she believes in the individual actors and the Director who has done projects for the different networks in the past. Aside from that, they are putting out a very current story and will delve more into the KPOP Fever that teens nowadays are crazy about and make the characters live in the moment but portray them differently so they can depart themselves with the goody two shoes role they used to see these stars on TV.

John Matthew Uy is also here. He's gone a long way from his Star Factor TV5 days and is juggling around appearances here and there. He was also in the highly successful She's Dating The Gangster movie with Daniel Padilla and Kathryn Bernardo. Joshua Rafael Davis the Yoyotricker and Ultimate Talentadong Pinoy isn't dishing out toys anymore. He's doing good in shows of TV5 and now he's doing this too with compatriots from other networks. He looks good and it seems that he's going to be part of the crew of John Lucas' character in the movie. Obviously we don't have any shortage of talent with this boy and we can only expect he'll be making this an interesting mix of personalities in the movie as Caloy.


Jon Lucas who played Dominic in the highly successful series Got To Believe in Magic and Michael in the longest running show Be Careful With My Heart (lol) will play the role of River Mondragon, a highschool hearthrob who's also an achiever and a student leader. He might grow the irk of Barbie Forteza's character later on, I'm sure it won't be helped.


I love Barbie Forteza in Half Sisters and I watch her everyday. I also have seen her best supporting actress performance in Mariquina that's been lauded by critics. Now that she's in this film, she's going to be very different from that kind cutesy role we often see her with because as she plays Calixta "Kai" Luna, an only daughter that's rich, but hungers for parental love. She's a hard core KPOP fan and falls for River (Jon Lucas' role). She's THE mean girl in school and she's going to make everyone's life miserable. She says this is going to be a challenge for her but says it's something that she wanted to do because she's always the good one on tv programs. She's welcoming the change and wants to see how they would be able to make the character as feared as she was reading it in the script. The character was that interesting so when her home station permitted her to play the character, she grabbed it. They were all hand picked by the way so just imagine this stellar cast on the silver screen soon.


I haven't seen her in person before before this event, but we've seen how she did "Bakit Hindi Ka Crush Ng Crush Mo" (Why aren't you the crush of your crush?) last year. I must say, she's really pretty. She also dresses well. Elisse is playing the role of Amanda "Mandy" Martinez. The character will be the best friend of Baste, but later on falls in love with him. We'll have to watch how her character gets beaten up by Kai (maybe) in the film. Will she also be the apple of the eye of Baste too? Well, we need to watch out for that.

Francis Magundayao has worked for both GMA and ABSCBN. In the Kapamilya Network, he's doing several MMK episodes and Wansapanataym (read as Once Upon A Time) episodes. He's also in the hit series "Sana Bukas Pa ang Kahapon" (Wish Yesterday Was Tomorrow) as Sebastian Syquia. He's on that show with Bea Alonzo and Paulo Avelino. His successful projects makes him one of the most bankable young stars in the network and when the opportunity to work with different networks arrived, he said Yes right away.

It was a no brainer because he always wanted to work with great people from other networks and lauds Barbie Forteza since he watched her shows and movies prior to this. He's also done an excellent job on his current projects and has amassed a good following even on social networks. In this movie, he's playing Sebastian "Baste" Agoncillo. He comes from a very big and happy family. Even if he's poor, he's doing good in school and wants to be a local Shakespeare in the making.

Alwyn Uytingco, Nadine Samonte, Alice Dixson, Eric Quizon and a lot of other actors will also be in the film. These strong personalities and the different lives they make will surely be a great place to start telling the story. They also showed us a couple of locations that they will be shooting in. I sincerely hope they make more of these independently produced films and make the more commercial ones have a run for its money. It's also refreshing to see the combination of actors and actresses since they're not playing and operating in their own stables this time. Let's see how they play this modern day Romeo and Juliet in the Philippines. I'm sure with the tons of successful shows that they've had, it would be easy to make their fan base happy on this KPOP influenced film. Watch it on theaters soon!