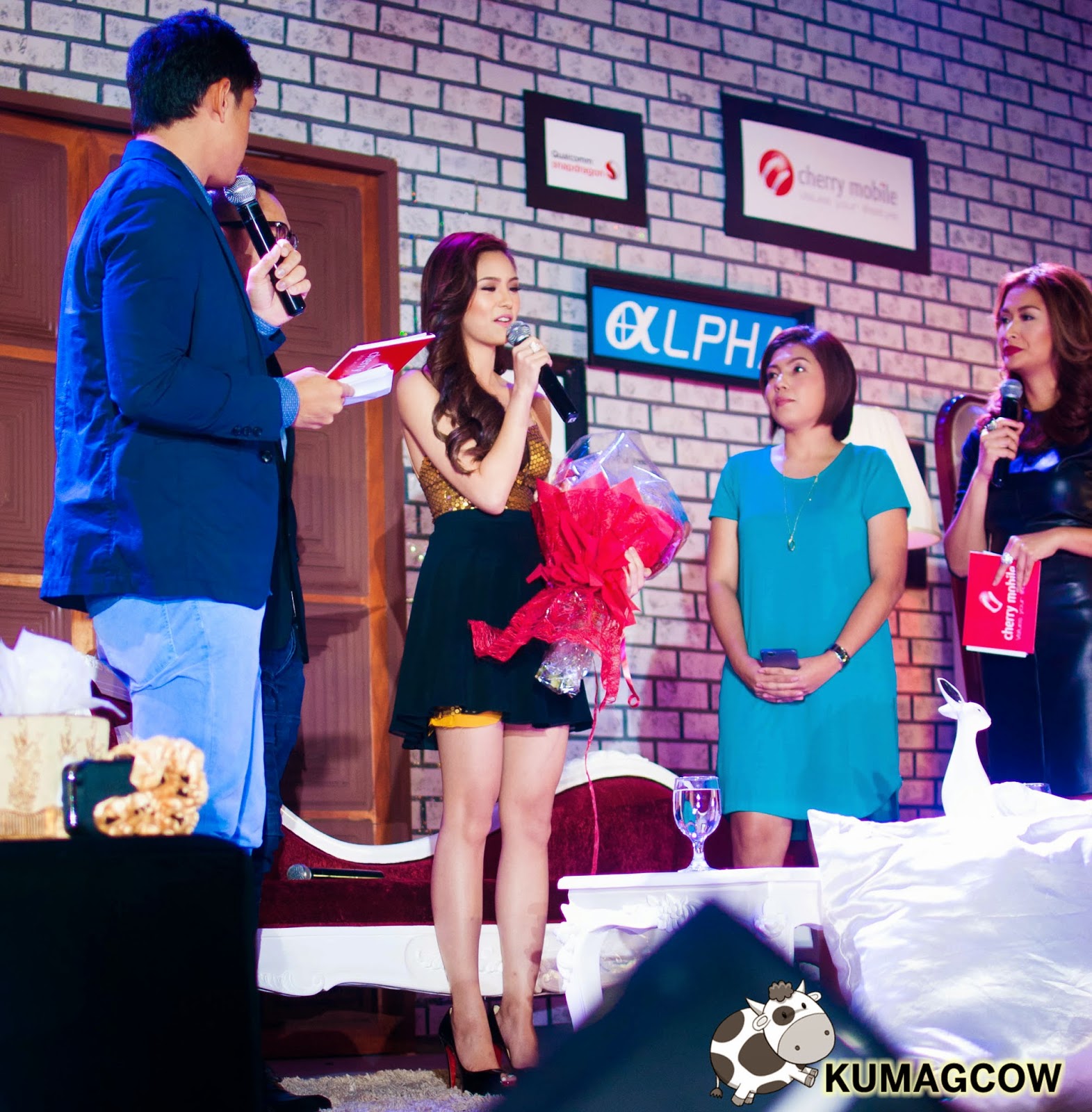 When you've got the number 1 mobile phone brand in the Philippines to release a line of new gadgets, you definitely have to have the number one teen star to endorse it for you. I wasn't surprised to see the one and only Kim Chiu a few days ago as Cherry Mobile launched their new Alpha Series. It's the first of its kind of mobile phone in the world to have this price point, making it the most affordable phone running on Windows 8.1 OS.

Kim Chiu was welcomed by Cherry Mobile's Executives and hosts Phoemela Barranda and co-endorser Actor/Model Victor Basa. The Alpha Series was made to solidify Cherry Mobile's leadership in the market and they also launched Kim Chiu's commercial that evening that will show in major TV networks, cable channels soon.

Kim also ushered in the gadgets Cherry Mobile had on their sleeves. With a press of a button, the two gadgets came out of this contraption.

Cherry Mobile Alpha Play has an 8 inch display, thick bezel and a little heavy. It's got a micro SD slot, USB 3.0 and HDMI port. The 5MP camera is enough for what you need for a tablet, plus again, it's on Windows OS.


Cherry Mobile Alpha Style and Alpha Luxe has Windows Phone 8.1. It's also got a sturdy, tough built, a Quadcore Snapdragon 200 processor, 4GB storage and 512MB of RAM. The difference is just the front and back camera, plus the actual style and display of the phone. The OS seems seamless on both which is probably attributed to the excellent OS it has. You've got to thank Microsoft for that.


As part of their intensive research and development of products, Cherry Mobile partnered with powerhouses Microsoft, Intel and Qualcomm in making the Alpha Series and got this release for two smart phones and two tablets that would beat most gadgets at the same price point then overwhelmed because of the Windows Phone 8.1 OS. I'm sure Windows has never done anything like this before, and this could well probably be the most affordable Windows Phone in the world. Something that's not seen on low cost devices.

They've also done a remarkable job on the MORPH and they plan to do more of these tablets with keyboard covers soon. Honestly, the HDMI and 3.0 USB ports on these tablets just made our day.

http://www.cherrymobile.com.ph/
Posted by John Bueno at 12:04 AM