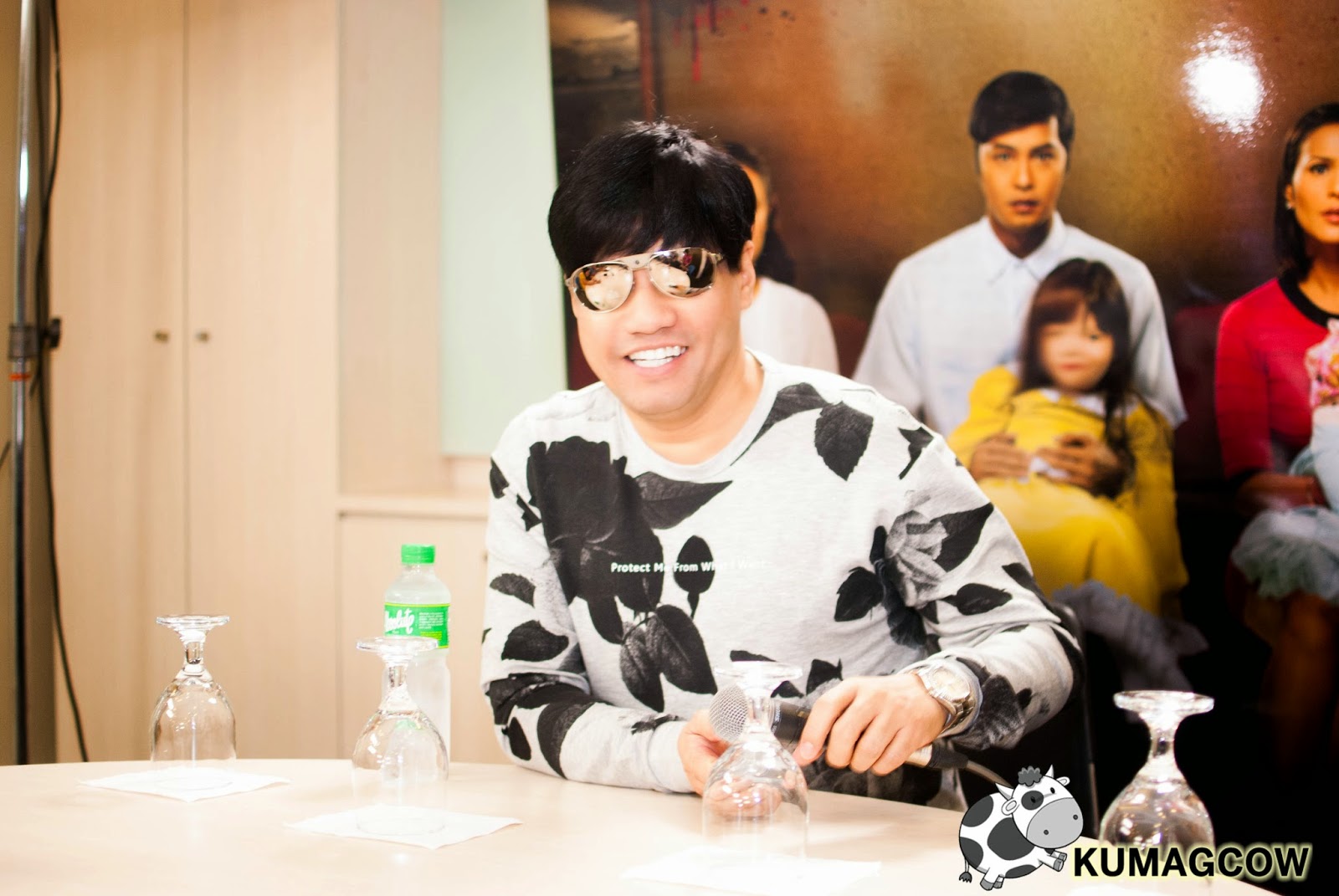 We met Director Wen Deramas a few days ago for a short interview regarding his new project with Star Cinema entitled Maria Leonora Teresa. It's a horror flick starring Jodie Sta. Maria, Zanjoe Marudo and Iza Calzado. The film talks about three folks who lost their daughters then started to have them replaced by dolls as therapy. Dolls that were all made into the liking of their own daughters. What they didn't know though was that they were up for a big surprise. They will start to notice that these dolls would later on have a life of their own, literally. Not just that, but they'll start to also have a killing spree, take over their lives, one that would happen when they least expect it.

It was also consequently Direk Wenn's birthday so we started off singing him a tune or two. Star Cinema folks ushered in with a caramel cake as he wished for the film's success. It's going to be pretty hard though to top what he's done in the past as he's got blockbuster films one after another. He's also doing another installment of Praybeyt Benjamin this MMFF season so you have to watch out for that this Christmas. Meanwhile while we were having the blog conference, we asked Direk Wenn about using the name of Maria Leonora Teresa.... he implicitly says that it's not to put an evil mark on his own well loved Maria Leonora Teresa doll of the famous Guy and Pip love team, that wasn't the purpose, that wasn't the thing they did. Maria Leonora Teresa is actually not just one person and he says it's about three little girls. These kids are all good ones, it just happens that the parents couldn't cope up and they were given dolls that were exact replica of the kids. It's not to insult the famous doll, it's not true that they are maligning it. It's even to remember, a tribute... because Direk Wenn Deramas is actually a Noranian too.

When asked how long the dolls were made, they auditioned the kids first, got the management to approve it first, then molded, in about two months they got the product. Dutch Ledesma does the special effects, her daughter Laura Ledesma did the dolls much like prosthetic. The scary one is Leonora, even in real life she is actually (then he laughed it off). They had to take care of the kids all the time so they needed about 9 kids all in all so they can do the movie. Leonora even asked Director Wenn about a special alphabet... and said D.O.L.E.., they said some numbers too like 163. Director Wenn made sure they took care of them even before they started because of that. Kids didn't have to go through grueling hours of filming because they were really not allowed to. Aside from that, he told us that this project was actually conceptualized early 2005 right after Kampanerang Kuba starred by Anne Curtis. It got shelved because it was really intended as a series and a lot of people didn't know that doing horror films required so much work. They pitched this as a series to ABSCBN's executives and got approved right away. When they did the Susan Roces series, this got shelved and he said he's going to do it after three years. This is his first horror film, he's definitely excited to see it be on screen!


When I asked Direk Wenn how much of it is Computer graphics, he says he barely used that. He was more keen on using actual people and sometimes they had to spend 4 days straight just for one scene. They had limited time and they had to do 188 shots sometimes. It's not easy. He even called the heavens just to make this work. The dolls already had that name when they started but the title of the series then was called The Dolls. He's also happy about the sound because it's very detailed. They do one part in one day, they had quality, checking and all done by renowned Carmina Cuya. We're talking about 5 parts and he had to even do it after the blogcon. Carmina from Roadrunner was really even impressed about it and had so much excitement doing it. Audiences can expect only the best from the film come theaters this September 17, 2014. You will definitely love it he promises, so go and get your family, friends and make it a frightful day to change your viewing habits a bit.