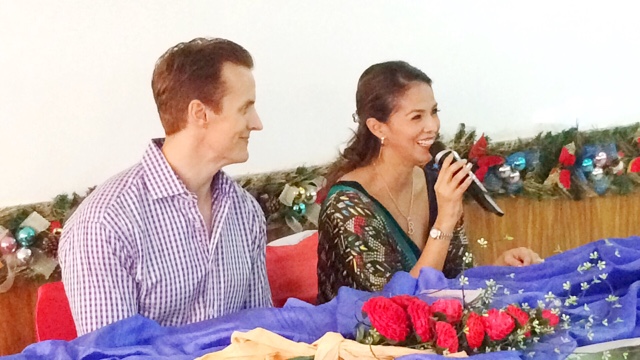 We found a very happy Patricia Javier earlier as she released an independently produced single called "Ngayong Paskong Ito" (This Christmas) held at the President's Tower in Quezon City. Patricia is now happily married with famed San Diego based Chiropractor Dr. Rob Walcher. They're also campaigning for the Lifestyle and Beauty work they're doing now as they've completely brought their whole family to the Philippines and plan to start their business here. They've already helped countless people; some celebrities like Claudine Baretto,  EA Guzman, Lyn Ching, and PBA's Calvin Abueva among others. They believe in a healthy lifestlye, a good spine and working on how to maintain good looks by using low cost products and a few beauty secrets. In spite of the years working in front of the camera, Patricia has donned several magazine covers even at her age. Even Dr. Rob agrees that it's not an excuse for Moms to not take care of themselves after giving birth to kids because it helps build confidence, a better outlook in life.


Patricia Javier is also excited about her new single. She purposely put this out on digital release so that people would start listening to it during the Christmas Season. The single "Ngayong Paskong Ito" (This Christmas) talks about the struggle of people who have their loved ones abroad or in the military. This is also for the OFW's who feel lonely, to give them hope that it'll be better soon.

Here's also our interview with Patricia and her husband Dr. Rob during the event this morning.

They were also thankful about Marc Nelson being in this video. He didn't hesitate to actually be in this video given their history as exes. They're still good friends and joked about next time doing it with her husband. In all honesty, I find her song nice. It'll really be good to listen to especially because it's the holidays. You might get a little sad but it's going to be better, I think that's the general message. That is good. It's also written and composed by Larry Hermoso.

For more information about her album: