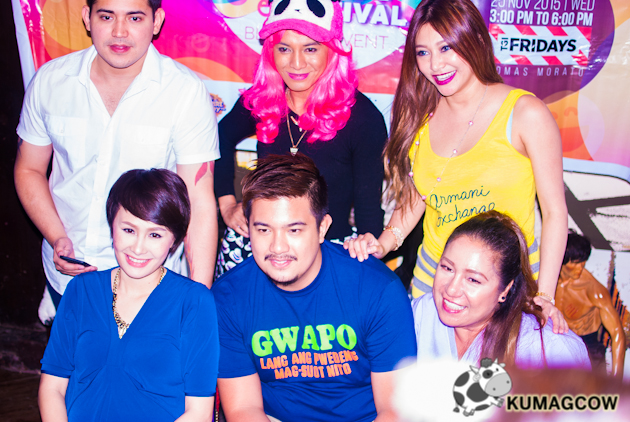 It was a super fun night to be with the brightest comedy stars of GMA a few days ago in what was dubbed as the Kapuso Comedy Festival. We got the chance to experience playing small games with Bubble Gang's Paolo Contis, Ruffa Mae Quinto, Charise Solomon, Ismol Family's Kevin Santos, Pepito Manaloto's Mosang during the blogcon at TGI Friday's in Tomas Morato, Quezon City. Hosting the small gathering was super funny Boobay who's also a part of Celebrity Bluff. It was a blast to meet new people and very talented ones at that. During the event, we first talked to the people from Bubble Gang who's actually celebrating their 20th year in the show. They planned a big event last November 27 and sure enough, there were tons of stars who went back on the show. This includes those who have also gone and sought refuge in other networks. They were all dolled up and gorgeous, I saw it on TV.

Here are some excerpts during the Kapuso Comedy Festival Blogcon:

It's such a good thing to see that GMA is still making efforts to make shows that are apt for the general Filipino audience. We still smile a midst the countless problems we have in our daily lives. Comedy is hard to do, they all agreed to that. In fact some of them do find it quite difficult to crack a joke than cry in a scene. The personalities, as varied as they might seem like on screen have one thing in particular in mind when they entertain people... they think about YOU, the viewing public and how you could spend a couple minutes of your time in front of the TV and forget the day's problems. No matter how small you think that is, it means countless  hours of work and brainstorming for most of these comedians. They even promise to do more in the future especially Bubble Gang who already informed us of new characters and new gimmicks in the next episodes. Are you excited as I am? :)


Thank you to GMA Social Media, Paolo Contis, Ruffa Mae Quinto, Charise Solomon, Kevin Santos, Pepito Manaloto, Mosang and Boobay for spending time with us. It's such a nice thing to get to know and talk to you personally. Again, thank you!

http://gmanetwork.com/artistcenter
Posted by John Bueno at 12:53 AM