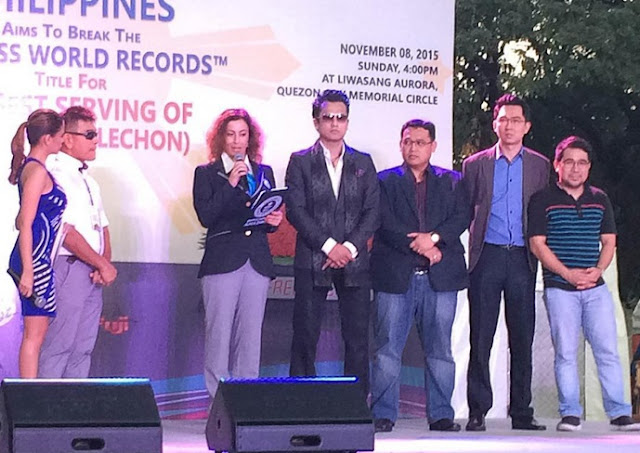 It was a hot and humid day but we were still happy during the event for Calata Corporation. For those who don't know, they're one of the largest agricultural conglomerates in the country. They are the corporation behind the distribution of brands like Bayer, Syngenta, Bmeg, Jardine, Monsanto, Dupont, Sinochem, Leads Agri, Planters Products, Swire, Yara. They are also behind agricultural chemical corporations such as AGRI Crop Protection, Heisenberg veterinary medicines, Thomson and Hine and Ivansmith agrochemicals.They also own Golden Bean Feeds which supply most of their products in AGRI stores nationwide. They're celebrating their 16th Anniversary and what better way to do it but by preparing a huge feast of roast pork commonly known as Lechon in this country. The premise is to break the Guinness World Record for the Largest Serving of Roast Pork set by Mexico a couple of years back. By the way, they supply huge corporations like Puregold, Lydia's Lechon, and others with produce, technology, distribution so you can just imagine how big they are in the industry. Instead of having just their company's posh party, they wanted to share it with the community. with those who couldn't really afford the well loved Filipino dish usually served in huge parties. Everything goes!

Here's what happened during the Guinness World Record Attempt


That's not all. Calata Corporation is partnering with other NGO's, Foundations to give scholarship grants to deserving students. They're eventually planning to also do this specifically for agricultural courses so they could further improve the lives of Filipinos in the agricultural sector. Their dream is to make agriculture cool and dubbed it AgriCOOLture. Since they're already making waves and earning a ton in this industry, they hope to inspire more people to work and change the manner they perceive the business because true enough, they're showing that there is money and opportunity in agriculture. Our aging farmers won't be there forever and there should be another generation of people who would want to spend their life working, tilling the fields with the help of new technology, advanced ways so this agricultural country would eventually NOT import goods anymore and just locally produce everything here.

http://calatacorp.com/
Posted by John Bueno at 1:18 AM