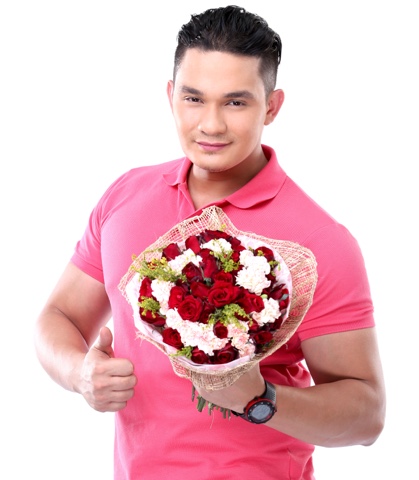 Looks like there's a new guy in town and people are starting to take notice. Why? Well you could see in the photo, he's Barangay LS 97.1’s newest man on board for Wanted Sweetheart, taking the monicker Papa Bol. He hails from down south in General Santos City and did the regional counterpart at Barangay 102.3. In real life, his name is Benjur Evangelista and he takes his craft seriously. His forte is matchmaking and love advice and will start this show broadcasting nationwide Mondays to Fridays at 9 PM. He's replacing the hit show's DJ Papa Dan and is crazy nervous about it. He deems it like filling his shoes, a big one at that but understandable.


Papa Bol as you may understand isn't new to the radio scene, he's been doing this since he lived in General Santos City for 7 years. Born Ilonggo, he gave raidio a try and got pretty good at it. Prior to this, he didn't have real experience on radio. He applied like everyone else and the love for the industry just grew. He loves it so much now. Today, he's going to be a realist, a cool match maker and he has been so successful doing that in the regional station. He plans to take that success nationwide now that he resides in Las Pinas City. He recently has also gotten thanked by people who met on his program, a mark of success he says that he hopes to multiply now that he's on board LSFM.

He is single by the way and if you want to catch him, just tune in 9-12AM Mondays to Fridays at Barangay LS 97.1 GMA's Flagship Radio Station. He's got tough competition though, you know who. And I listen to him a lot, I wonder if he's gonna be of a challenge. Let's see!