Having a very successful exhibit last year means they've got to do even bigger this year as they also are celebrating PSID's 50th year. A golden year of interior design showing glamour, opulence, luxury and design elements that portray the expertise and craftsmanship of Filipino interior designers under the tutelage of Victor Ruel Pambid Jr. Under him are the graduating students of PSID and a couple of alumni from the same institution that felt showcasing their work would be the perfect way to celebrate it. 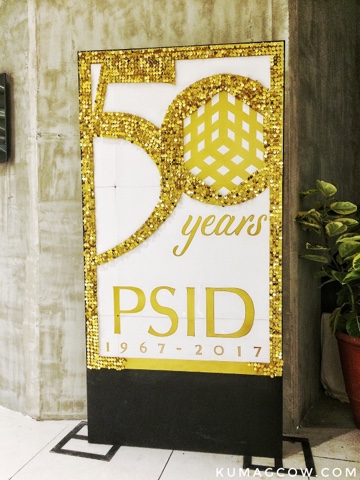 True enough, students of PSID whipped out their interpretations and different use of color, texture and elements of the precious metal. It has to be felt, it has to be seen, from contemporary, modern, moorish, egyptian, popart and rethro, gold elements were indeed a welcome sight. 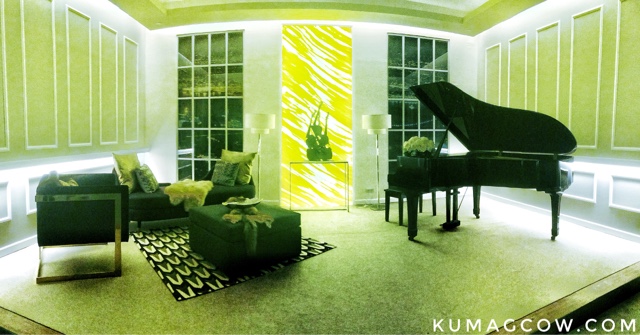 The MODERN FRENCH RENAISSANCE living room had a lot of gold wall treatments. It made the room wreak expensive, spacious but not overly decorated. I could imagine this to be a royal study where a prince would be forced to learn piano at a young age, but that's just me.

This one is POP ART, a little difficult to execute because of the limitations of shades that would complement gold. They used metal sheets, purple velvet fabric on chairs and sticked with the gold elements even for the artwork. It was okay but I'd like to see several colors and gold executed in this space, they didn't gamble. 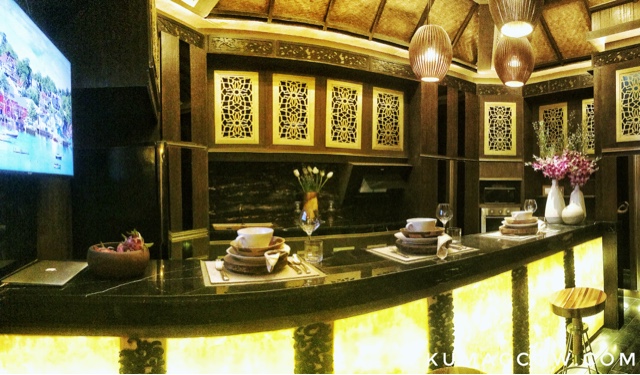 This is the BALINESE kitchen. They had a foreigner in mind as a client in this area. I like the long black marble bar/granite counter which has got a prep area so you can still entertain guests while cooking or preparing drinks. The native ceiling, the Balinese flower details on the cabinets felt a little too native, though if it's needed to interpret their room, I would use different materials. Design shouldn't be so literal. 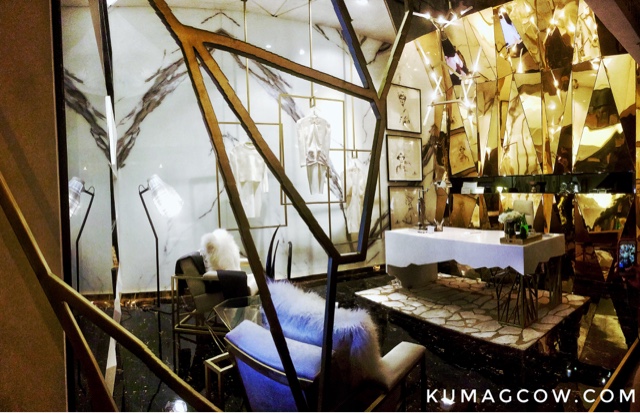 I was impressed with this one. Aimed to please a client who's an up and coming fashion designer, they patterned their space with the elements seen with the recent work he's done in recent shows. It's nice to see gold metal, very structural and architectural in nature and used to reflect the rest of the space, it didn't feel cheap, Miranda Priestly would be proud to move here. This is MODERN DECONSTRUCTIVISM. 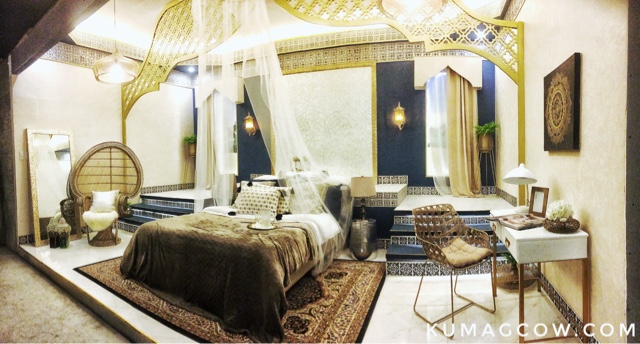 This MOROCCAN OASIS is more on the moorish side. The bulb shapes, the nice headboard, the brass fixtures, is reminiscent of a palace in the middle east. I like the seating on the elevated platform, a place you can hangout with your friends or family. Why didn't I think of that?

The space for the CONTEMPORARY EGYPTIAN was laid out quite nicely. It's got ample storage, symmetrical elements and I love the gold trimmings. It's good but what bothered me most was the supposed Egyptian posts, and the water closet. The posts felt a lot staged, almost cartoon-ish, like a sore thumb sticking out from the rest of the things that were there. The water closet, albeit in an open layout should have still been made with a situational private section. It felt too open for comfort, I wouldn't want people be seen taking a dump. It's a his and hers sink, so if they'd do that might as well have something to at least cover or mask it. Or maybe it's just me who's bothered, but there.

In this living room, a CULTURAL AZTEC theme was in play. I like the details on the wall. The sectional would probably be uncomfortable and might need a little getting used to. Let's just say it's not as cohesive as we wished it to be. 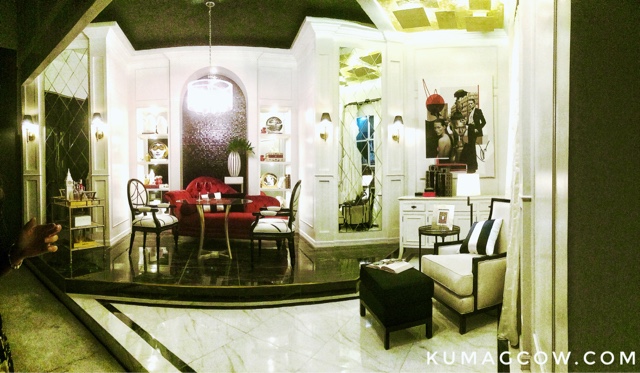 Fit to appease a chic successful business woman, this CONTEMPORARY NEOCLASSIC dining room are built with different elements. You've got very detailed chairs, custom made to fit the black white and gold theme, plus an accent chaise lounge chair in the dining table fit to feed around 4 people. I like the things they did with the artwork, mixing around some greek busts with british knick knacks, much to have felt like a London apartment. Pretty good, I like the gold plates on the ceiling too. 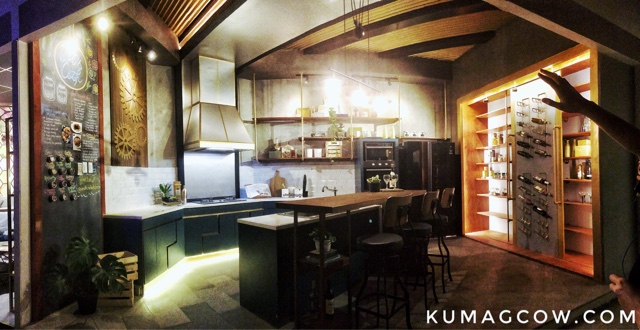 This is the INDUSTRIAL LUXE. I know it is pretty hard to actually produce a luxurious industrial spot and I think this didn't quite live up to it. This was rough and I personally don't like how they didn't commit much on the color palette. If you would put wood, it should be cohesive. Yes the bright color might have put focus on the large pantry but it failed on the finish. It didn't look smooth, to get to that luxury they were calling for. If they paid attention to at least have it the same like much of the wood counter and chairs they had in the island and followed the same, then I'd believe their theme even more. Martha would be sad.

This entertainment area is inspired by MODERN ART DECO. If you've been to Manila, a lot of buildings actually follow this look. This treatment felt like a bachelors pad, where the sectional turns into a huge bed (bigger than a California King) and it's got a wet bar plus tons of storage and cabinetry on the sides. They enthusiastically said it's for food so you don't have to see it all the time because of the sliding doors. They also thought well about the acoustics as those flower ceiling is intended to bounce off what's coming out of the huge Samsung TV. I like the color theme, it's gold trims are not too overbearing. It's just enough.

This is ECLECTIC ELEGANCE. It's with a hodge podge of personalized items set to fit together like a glove. I specifically like the work area and the colorful headboard which draws you in. They also showed the large screen that you can change artworks in, like a different one everyday. Wouldn't that be a dream? Albeit busy to the eye, this is like organized chaos, with a place for everything you need in a room and small office. There's also a place to entertain, quite nice.

This was the Mindanao inspired bathroom they had for the NEO ARCHIPELAGO style. The wood patterns are from fabric from the region, all of which I think is a better executed bathroom. The water closet is hidden behind those waterfall his and hers sinks. It didn't feel clunky at all. These students really have talent.

They also had alumni, professors actually join in too.

The Philippine School for Interior Design (PSID) will be doing this exhibit the whole month of October. Dubbed as GOLD: Glamorous, Opulent, and Luxurious Designs, this is their graduation exhibit set to showcase Filipino design and enginuity. Make sure you visit them at the Uptown Bonifacio Mall in Bonifacio Global City. It's right across the H&M store so you wouldn't miss it. It'll be something cool to see if you're around the area, if you're on a date or just interested in interior design. You can also get referrals to their builders, they can share their stories too. You shouldn't miss this chance because it only happens once a year.
They have a lot to show.