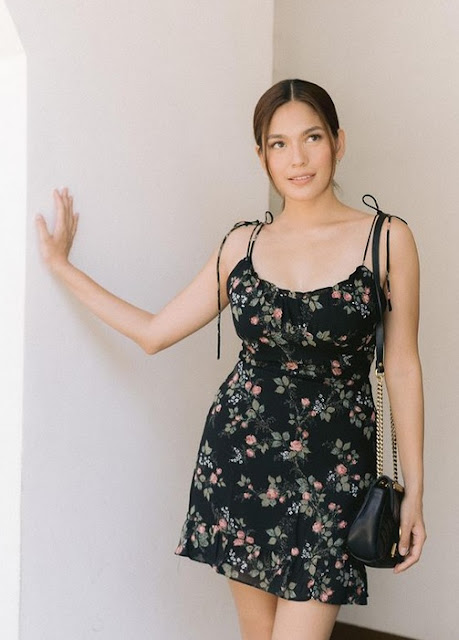 It's so refreshing to see Andrea Torres in GMA shows these days. She's definitely made a mark in The Better Woman, Victor Magtanggol, Contessa, Alyas Robin Hood, The Millionaire's Wife, My Faithful Husband, Pari 'Koy, Ang Lihim ni Annasandra and more but this new one with Dennis Trillo, Bianca Umali and Alice Dixson is going to be highly controversial as it delves on polygamy and religion, some of the most taboo things to talk and see on TV these days. We got to see her a few days ago via an interview online as she signed with GMA Artist Center again (renewal of contract) and during the blogcon, she told us a few more things about the upcoming show called Legal Wives wherein she'll be playing one of the wives. She's also the only one that's coming from a Christian upbringing which would not be easy to understand that she'll be living with two other wives under the same roof. Here's a video of that blogcon, please enjoy!

Andrea adds "It's very important for me that you are aware when you get on set, you condition yourself as a ray of sunshine, to make sure you lighten up peoples burdens. I also make it a point to make my projects better so the next one is even bigger. One of my favorite things is making back stories for the characers I play in series, I make sure I ask production, learn the script so I make sure to deliver and have the chance to make her come to life. The actions of Muslims to me now have a deeper meaning, they're very selfless, and when you watch this, you will see why they made sacrifices for Allah. It has changed how I view them, how they are family oriented, how they are as people. Diane and Ysmael are conflicted, but they love each other."

She also was aware to observe Muslim traditions while portraying the role and tells us "On set, we have Imams, we were taught how to pray, they also bring food, it was a different world. I really am amazed how they are with families, if it's too hard for them, they just follow what is on the Quoran, even if they don't want to do it, they do it right because it's there."

You'll probably be wondering how this would all feel as it gets shown on TV. Will you love her? Or hate her? That remains to be seen. She also has chosen to remain with GMA because she has grown to the actress that she is because of her experiences here. With the onset of actors going to GMA recently, she doesn't treat them as threats, but rather an opportunity to work with other actors that she wasn't able to in the past. She's raring to do that in the next few months, hopefully that John Lloyd Cruz project pans out if it is true, but so far there hasn't been an initiative for talk about it yet, so she would be happy to find out details about that soon.

Congratulations Andrea on your continued success with GMA Artist Center!