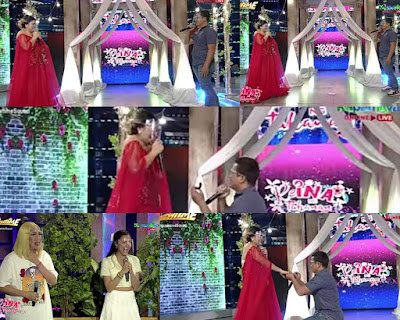 If you've been binge watching "It's Showtime!" these past few days, you probably have figured out why it has reigned supreme in ratings despite the challenges of not having it broadcasted on free to air TV for a few months now. The popular portion in It's Showtime takes a screenshot of true life, of how it is to be a Mom at this day and age in the Philippines. Contestants come from different economic backgrounds, most of whom have difficult life stories and want to in one way shape or form to become confident in their skin, showcase their talent to the public and feel like queens even for a day.
This week had us see someone literally heartwarming as they finally popped the question on national TV - a Mom who has been in a relationship with a guy for a long time appeared on the question and answer portion and brought out a ring, to finally fulfill a ReiNANAY's dream of getting married. Vice Ganda and Kim Chiu witnessed that too and honestly, it made a lot of people tear up during the show.
Today they also had a woman almost have a break down because she forgot everything she practiced during the introduction of candidates, but Vice Ganda quickly turned around things and had her repeat her script 4 more times til she got it right. The part where they had to run around on stage and make light of the situation was just genius, I'm sure a lot of people at home would find this not just fun but extremely entertaining. It reminds me of programs that showcase a slice of life, where we see happiness, fun even in the most awkward situations. It was lovely to see Vice pickup banter and add in little tidbits of things she learned all these years. 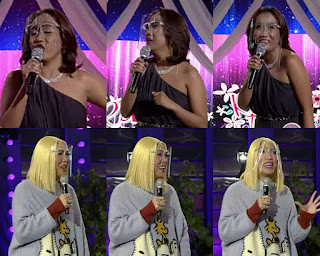 Vice says "It's a pretty difficult time to produce a show of this caliber because we are still under the pandemic. We don't even have the liberty to move around that much during the show. In spite of all these challenges and extreme exhaustion when we do the show, we feel it's all worth it because we're giving entertainment that Filipinos deserve. We also gave ordinary mothers a platform where they could have fun and loosen up. They are the real reason why we are doing this, for the most important people in our lives, our Moms!"
Which reminds me, Vice is actually having a repeat of her concert entitled GANDEMIC this coming August 14 as clamor for it is at an all time high. Vice never disappointed fans during the weekend of her concert and this time, she's going to do it for you guys and gals who are fond of Vice's antics and brand of comedy. Tons of guests, super fun acts and special numbers will happen on this date. Make sure you get your tickets via KTX.ph ahead of time and get the VIP so you can see and be in the midst of Vice right after the show.
Vice really has been a good source of laughter during these hard times and I'm so happy she's doing it one more time even if she's busy with Everybody Sing and It's Showtime.