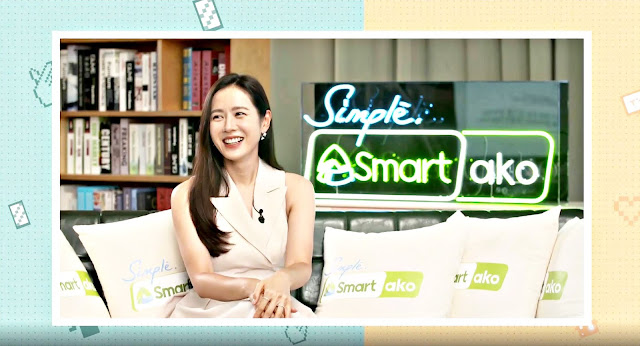 After the hit Korean television series Crash Landing On You, Son Ye Jin has definitely caught the attention of her Filipino fans. In the series, she falls in love with Hyun Bin's character Lee Jeonghyeok even if they were in other sides of the fence (North and South Korea). While that ended a couple years ago, Filipinos still adore them as the KDrama fever went on despite the pandemic. Smart knows how important connections are so they brought Son Ye Jin through Smart Hallyu Hangouts so some fans would be able to interact and talk to the artists online, ask them a few questions and feel the love all over again.

It's like a fan meet of sorts, but when asked how she feels about the love she's getting from Filipinos, she says "Honestly, I didn't know how popular I am in the Philippines. People have been sending heartfelt messages, photos, tagging me in screen shots from the show. I'm so happy just knowing that. The Smart shoot took quite a long time because I had to not only work with a Korean crew, but a Philippine team as well which I found quite fascinating. I had to communicate with them over the internet and I'm so glad I got to do it with Smart Communications. I'm very happy that I got to work with them despite the odds. The pandemic had us all confined in our homes after shooting CLOY and we didn't really think much of it til it had really good viewership not only in Korea but elsewhere in the world. But these days, I've been doing my share of isolation at home just like everyone else. When I get good feedback from fans, I don't really get tired of it, I actually want to hear more! (she kids). These days, I spend a lot of time working out and walking my dog when I get the chance to go outside. Exercise makes me happy, it's actually good for my mental health. I would like to go to Boracay soon but I've been to the Philippines before with my family, I find pinoys so welcoming, innocent looking, everyone looked so happy when I was there."

Good thing is, Smart is going to treat us again to something good this coming July 31st as they feature no other than the Captain himself, Hyun Bin on the next Smart Hallyu Hangouts at around 6:30pm on Smart's social channels. Make sure you like their page if you want to be part of that!