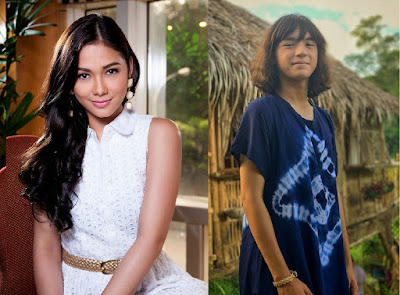 Making waves in TV5 is the new Dramedy Niña Niño. Getting stellar reviews and consistently high ratings means a second season is about to come and we got to talk to some of the people behind the show a couple days ago, plus discussed a few things with the cast now that they're doing it again for the public.

Direk Thop Nazareno says "I'm thankful for the opportunity, this concept was just perfect to have during the pandemic, I hope we could inspire, because in a way we could help in making others forget about their problems, and we have God who we can call to when we do. It's something that I look forward to do each day, we are inspired about the support we get from people who watch our show. When we got news about the extension of our show, we felt we had a lot of people to entertain. During production, we don't have egos, all we want to do is make sure the show becomes better. We listen to the actors, we bond a lot and talk casually, we're a relaxed set and not try to impress each other. We even form stories when we're talking to each other, we have a say on storytelling. I don't think about it that it's on primetime because it might affect the way we tell the story, I take it as a challenge and be honest with ourselves if we put ourselves in the lives of the characters they play.

Noel Comia Jr says "In Nino, we didn't realize how big it is, we're so thankful people are watching and even my relatives close shop just so they could catch the show at home. I don't get tired anymore because it's wonderful to feel what our show can do. When Maja is in the scene, I feel I learn a lot from her. Her energy gives off that you have to do good because she's doing her best. I use my experience here in future work and episodes. The cast has been very supportive and they help me in scenes so I can feel the story per se. When it gets shown on TV, there are times when co actors point out things before we do the scene. That alone helps a lot especially when we have to do intense scenes. When I did the recent scene with Maja, I had to live in the moment and understand that I don't have my Grandma. The emotions were just super heavy and the people at my back were worried because I had to be in the zone, I had to prepare hours before that happened. Til now, I am in disbelief that we are having a mediacon for the series I'm in. I am thankful to Direk Toph, to Cornerstone, to TV5, to Spring, it wouldn't be possible without my parents who are very supportive. I am a bit overwhelmed though. Ate Maj always brings Jollibee on set and it's one of the unforgettable things I remember when shooting, but even if we're tired, we have lots of shots that we couldn't believe that it'll end up that way, the transformation from shooting here is different. I got to celebrate my birthday on set and everyone participated. As an actor, I can say yes it has changed me a lot in a good way. Everyday you learn things, you see what you can improve, plus the relationships you form with the cast is priceless. I love the things we do in between, it helps me in building confidence."

Empoy adds "Because in ABSCBN we already worked with Maja, it wasn't difficult to execute our scenes here. It was catchy, we had to throw lines and the feeling is light. I had to make sure she doesn't fall in love with me because we know. The actors here are super good, even the ones behind the camera. I hope to continue more seasons, like Marco Sison. I hope people continue to watch this show and be assured we're going to do our best!"

Moi Bien says "It's hard to do this during the pandemic and since we're locked in, we can focus on our work and still abide from protocols, we can't sacrifice our health and take care of other people in the set. We also change masks regularly, after takes we get reminded to do so. It's so good that we're following so we have jobs even during this time, it's a little sacrifice.

Dudz says "We have safety officers in place that do remind us of every step. We have them on set so we get reminded about social distancing, we can't allow people to come in. We just eat a lot on set so we do actually gain weight a little. "

Ahron Villena says "So far the crazy things we do on set continues off cam so we don't get stressed even if we're working hours on set. They're very cool to work with because even if I'm doing a guest role, it's pivotal to the other characters. I'm thankful to the production for having me!"

Lilet says "I am very excited to be here now as we're fully vaccinated, I had to go back to set and do this. I joke around on set and tell Direk Toph I'm ready for my scenes now that I got my doses."

Yayo Aguila says "I haven't stepped foot yet in Sta Ynez but I'll be having my own domain. The people behind Nina and Nino were really so warm, hope to see Noel after several days because we haven't seen each other physically. I always tell them that I'm impressed about how organized they are and follow protocols. It's not sugarcoated, this group is just so blessed because of the theme, the people, the way they handle things, I feel so cared for. You'll have to wait for our scenes soon!"

Kat Galang says "I have a lot of people that I wanted to work with especially with the theatre actors and they're here in the TV series. I also had the pleasure of praying for them during the start, and I'm blessed to work with them in that remote location. It would have been hard doing it in that sense especially with mental health on pressure because of the pandemic. It's good that we don't have signal there because we got to really talk and know each other, it feels good to be in the midst of these actors."

Niña Niño will show during weekdays on TV5's Todo Max Primetime slot so make sure you're tuned in on the Kapatid network and their affiliates (Cignal etc). Thank you to the kind people of Cornerstone for having us on this blog conference!