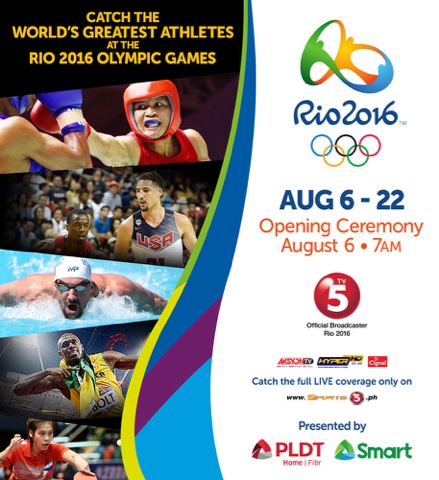 I am still trying to get over those olympic qualifiers where the Philippines proved to be at par with the world's best and I just learned that it's only 5 days to go before the actual Summer Olympics start at Rio de Janeiro in Brazil. The most awaited part will happen on August 6 the open ceremonies wherein these olympians will march down the grand stadium so they could wave to the crowd and represent their country in the most awesome sports event that only happens every 4 years.

TV5 has been able to get the biggest sports events covered, not to mention the last FIBA Olympics Qualifying Tournament just last month and they've done a spectacular job doing that. This RIO2016 won't be different as they will show some of the most exciting matches and events that our own 12 Filipino athletes will compete in. The rest of us at home should cheer because once they step into the ring or run on that track, we need to give them the support they deserve so we could win that elusive gold medal.

Catch the LIVE RIO OLYMPICS broadcast that will happen 7AM on August 6 at TV5 or you can stream it on www.SPORTS5.ph and all other affiliated channels on cable and UHF TV. The RIO2016 coverage is of course presented and powered by PLDT and SMART, the country's biggest network! Let's all get that Filipino heart pumping when it starts on August 6 and end on August 22, 2016!