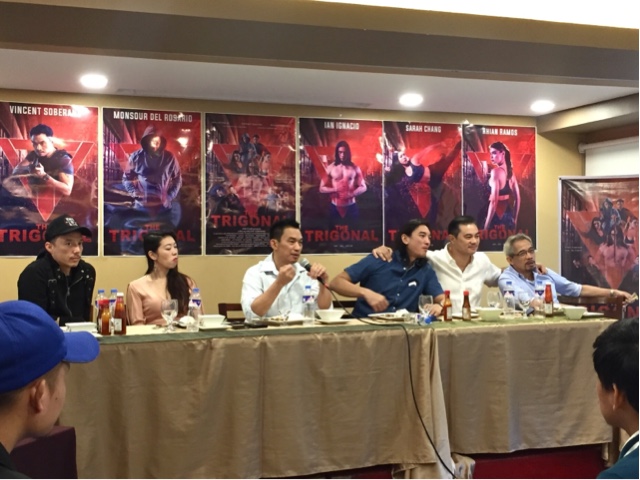 Had working lunch with the cast and people from the movie THE TRIGONAL. It’s an action film locally distributed by Viva Films and made by famed action director Vincent Soberano. This is the first starring role of Ian Ignacio, an actor that’s also a Taekwondo and Jiu Jitsu athlete. It also stars Monseur Del Rosario, world champ wushu athlete Sarah Chang, Epie Quizon and a lot more. 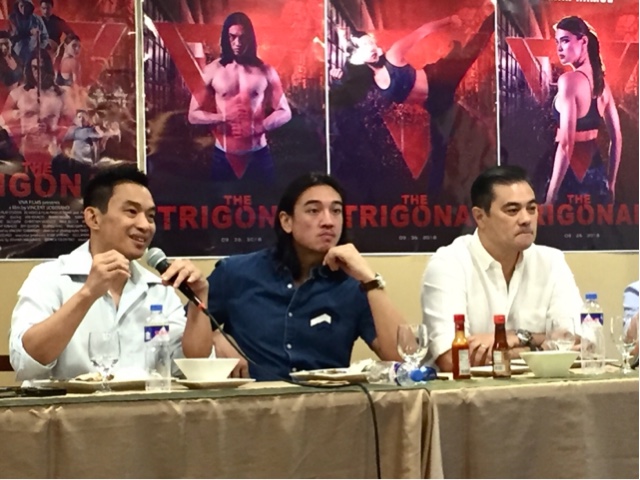 Director and actor Vincent Soberano says “Thank you for coming, our trailer from Viva Films. When we first released this, it was three hours. We had to trim it down for Cannes, now it’s even shorter but this one is still 100 minutes. This is a collage of scenes that was cut out from the Philippine release, they want to live in a small town but Jacob (played by Ian Ignacio) decides to go and compete again. This is going to be shown on September 26. This starts as a love story, not just action. You’ll love what you’ll see. I haven’t been in the Philippines for a long time, I took on a supporting role as Tony Pascual and tried to track down the elusive drug lord Henry Tan and we had to infiltrate him using the underground fights. This is one of the big reasons why I came back from the US and China, trying to pitch this to the Beijing and Shanghai film market and they really looked down on it. That was 2015 and it was my personal goal to create a high quality high action movie. My childhood friend Monseur and Levi one day talked to me and this was my choice to bring the genre back to the Philippines. I want to also bring this to the international stage, I wanted to push for the Pinoy to be the hero. It’s what made the US quite good on screen, film will have a lot of impact. This is the first step. The second one is to put Filipino stars on it, including some of the best fighters in the world so we could promote the Filipino films to the world! This is my first Philippine released film, but I had projects in the past. I met Ian in a party, he had theater background and that is a solid foundation. He is also a black belter, so when we made blood hunters, it was his testing ground. When I saw him there, I knew I could make him as the next Bruce Lee, as he’s a legitimate fighter and a good actor. I talked to Mon and asked about Ian, I didn’t look for another guy anymore and gave it a shot. In the rehearsals, I was very confident and he didn’t look back. I started film making in San Diego, lived there for 25 years and finished film school. I worked for a studio in the 90’s, I started doing odd jobs then assitant direction, I did this together with my Martial Arts career. I needed to fight so I could win and get winnings and pay for my tuition. I also teach Martial Arts. I was discouraged at first to make films in the Philippines because action had a slump. I went to Beijing to do projects there, learned Martial Arts too. I casted Rhian Ramos because she fit a lot of requirements, we had enough time to train her and the martial artists we had all helped. In my style the punches and kicks really hit actors, she was partnered with a person with years od training so he can roll with a blow. Rhian is very athletic. We had a lot of auditions, she wasn’t hand picked and she did it with her own credits. We just taught her the proper form and that’s why you’ll see her good in the movie.”

Levi says “I am the chemist, contrived, a support role but got caught. I saw Ian walk in the martial arts schools in the US, but I always had one person in mind to do martial arts, it was only Monseur Del Rosario. I knew I could trust him, he learned the ropes. You have to know how to punch, kick, and that takes years.”

Congressman Monseur Del Rosario adds “I have been out of movies for 13 years. I haven’t done much. My role is their sensei, they are doing underground fighting and if Ian wants to win they have to go under me so they can win in underground fights. It has some true to life elements, I am supporting my nephew and I have known him for a long time. My last film was 2005-2006, with Ronnie Rickets and Regal. I wasn’t offered action movies after that but I always offered contra bida roles and it wasn’t quite nice for my image. I entered public service in Makati, so I focused there. Now I am congressman, so I am taking that seriously. I met with Vincent and told him it didn’t work for me so we met and made short films first, it won best short martial arts film in New York. The Trigonal is the second movie, and our next one is very big. We wanted them to get a taste first and I knew I coached Ian well, he was ought to be in the national team, now he can speak tagalog, English too so we want a worldwide audience. Vincent also had this shown to Jackie Chan and he said it’s good but a little long, it’s why we edited it for the other festivals. Now with the people who watched it, we received good feedback even the martial arts practitioners who watched it. He’s the only one who got in the Shaolin Temple (Direk Vincent), he put up his own martial arts school in Beijing and got the respect of masters there. In Ian’s generation, he is an authentic fighter. He is also single. So if you have someone to refer to him just let him know (he kids). The Trigonal is an underground competition, a triangle ring where they fight till one goes down. It happens in Mexico, Vince knows a lot, Sarah Chang is also a world champion.”

Ian Ignacio says “I am Jacob Casa, a lover and fighter, a husband wanting to be a fighter. This is my first movie playing lead. I wanted to do showbusiness but had to go through my Dad. I was in Engkantadya and Buy Bust. I compete in Taekwondo and Jiu Jitsu. I competed in the seniors even if I was just in highschool.”
Sarah Chang says “I play Mei Li, I visited Bacolod and helped Jacob into the underground league. I was in Bloodhunters last January, did the action scenes here and did scenes for them. I started doing Wushu since I was 7, a friend introduced me to Vincent two years ago  at the Jackie Chan center at the outskirts of Beijing.”

Epie Quizon says “We have a dojo, and this is where most of the trainings happened. I don’t want to spoil things with my character so I’ll stop there. They all have black belts, I asked them to fight me. I am a business partner of their dojo, I am not as good as them but I convinced Ian not to fight anymore and just concentrate on the business. I hold the secret to the twist.”
To make a good movie you need everyone to chip in and really good actors. This is hard to do and these elements will make or break that vision of what the Director wants the movie to look like. They are so lucky to have been able to work together, they already have accolades with the talent they have behind and in front of the camera. They are very good. This is very promising.


I hope they can do good in the box office. They deserve it.