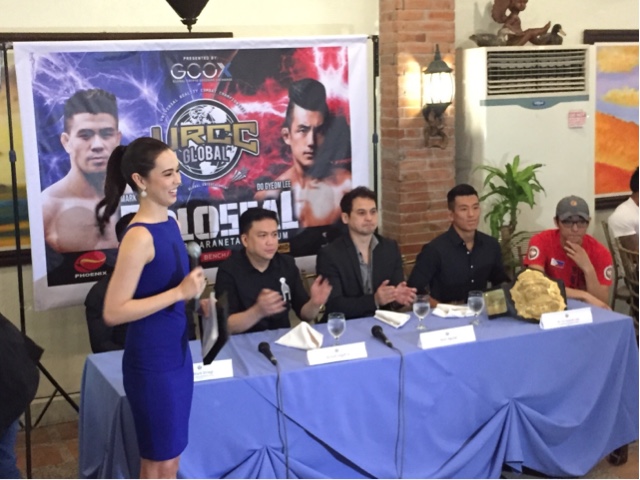 Spent the afternoon in a room full of testosterone at the press conference of URCC’s COLOSSAL, a global fight series hosted by URCC. It’s a league based here in the Philippines and the dream has come true for it’s founder as they venture into a global challenge series. They will partner with different leagues in different countries and bring them together and get in the ring for this big fight.

Arnold Vegafria says “This is the first series of URCC Global fight. I am happy and proud that we have a lot of Filipino and Korean fighters joining us in this league. This is a Filipino league and we are bringing it to the world. To all the fighters, you are the peace and goodwill ambassadors too.”

Founder of the URCC Alvin Aguilar says “It’s an honor to be here and we have the same vision. The weigh in will happen soon and we will also have something to do this Saturday, you have trained your whole lives for this. We will conquer the global stage. We have fighters from Brazil, we also have fighters from Korea too.”

Do Gyeom Lee says “It’s known Mark Streigl has ground work but he’s hasn’t got striking prowess. I am great overall. I don’t care about the opponent, I prepare just like in any fight. I am happy to be back in Manila, I did my second title defense in Araneta and I promise to put up a good show for the fans.”

Mark Streigl says “You never fought someone in my level before, we will get a title on Saturday. I have fought a lot of fighters like you before. A fight in araneta is just monumental, there is a lot of history there.”

COLOSSAL will happen on September 29, 2018 at the Araneta Coliseum. You’ll see the featherweight champion the undead Do Gyeum Lee from Korea, his challenger Mark Mugen Streigl from the Philippines (title match) and undercard matches. It’s composed of Caloy Baduria of Elorde Sucat vs Sugar Ray Estroso, a 3 on 3 match with Seung Hae Lee, Bum Suk Jang, Jun Bae Kim of South Korea versus Team Pilipinas’ Brian Paule, Mark Palomar, Patrick Dos Santos. They will also do a match for women with Geli Bulaong vs Ji Yeon Seon. There will be other matches so you better be ready once this happens.