David Hwang in the Philippines for M Butterfly 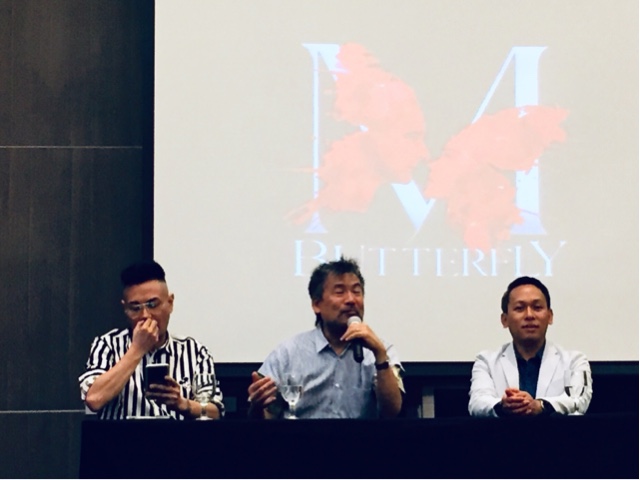 Sat with Theatre people, members of the press and the cast of M Butterfly. This time they are hosting a luncheon for the author of M Butterfly, playwright David Henry Hwang. Yes he is in the country and he saw the Manila staging of M Butterfly.

Grammy and Tony Award winner Jhett Tolentino (the producer) says “I remember our first presscon and in the afternoon we had our rehearsal, we are now almost at the end. It’s all so sudden. Now we have given you David’s bio but I am gonna say something else. I first saw him in Chinglish and wanted to do production ever since. He’s the only Asian American playwright in Broadway that has a Tony Award, I asked him to come and this is the third country he’s visiting. He’s very in demand. The Broadway League (which i am a member of) and American Theatre Wing (which David Hwang heads) manage the Tony Awards, so he’s half of that. The key is finding the right partner and I found that in Frontrow, I wanted to see if you would be able to see that. It took me three trips to complete the cast. We had technical issues and fixed it, we were given what we were supposed to but doing this, I wouldn’t change anything.”

David Hwang says “I have been fortunate that there are so many productions of it, I don’t see it outside New York but I did on this one. The Philippines has a special place in my heart. I have an old Chinoy Family in Cebu so this was always asking for reasons to come back here. It was a legendary performance for RS Francisco, it was a fun secret. It brings together a lot of things, the opera singer, Galemar, his being French, the theatrical elements were combined seamlessly and a montage of different characters flashing through his head becomes this man who is struggling but has this passion and emotion beautifully conveyed, you can’t take your eyes off of him. For most of the play he is dressed as a woman, then third act got to be a man. It was wonderful as I have ever seen of M Butterfly in the past 30 years. Thanks to these cast and this wonderful country, I love you all.”

During the interview he said “I came to an arrangement with them and shared profits, Shi Pei Fu has already passed away. You’re fortunate to have a show that has a long life, you just feel grateful. It has gender fluidity, conversation between East and the West and it encompasses time. I did some substantial changes in Broadway to reflect the things we know about gender, this production is the old version but tweaked. What is nice is that I do see there are ways the old version anticipates the things we are talking about today. The ambiguities are inherent in the classic version. I don’t know the exact details yet but we will kick off a tour. Right now we are partnering with SM cinema. It will be in different cities, Iloilo, Davao, Cebu, Dumaguete and Baguio, hopefully on sale in October and November. Over the course of 30 years, my fundamental thoughts of the characters have changed. I thought about them more but I do think I am proud of, I understood there are a lot there are different aspects of them now.”

RS says “Hearing it from him just blew my mind. I wanted David Henry Hwang to see it, it was in his mind so that I could see if I did succeeded. If not for M Butterfly I wouldn’t be where I am now. People that I meet even recognise me as such, thank you to David for bringing it to life. Years even before M Butterfly, about 85-87 I played around, in school had my crushes but wouldn’t talk to me because they hate gays. I used to call them incognito practicing, learned their fantasies of three different people while I played a woman. M Butterfly came into my consciousness and I auditioned for that in 89, but it was scrapped. I met a guy and did an audition in UP with lines memorised. Tony met me after Alkalde ng Zalamea, they introduced me as the star of M Butterfly, the last few pages was missing the nudity part. From then on, I took it to heart. I used things to anchor as a straight guy in the show. Before, I was just doing it as lines and getting it now that I didn’t believe that because I wasn’t age appropriate. Now I think I have gone through much, I’ve been through a lot as a person, it hones you. So many emotions I can pull now as Song Li Ling, she’s ripe and textured. I told Jhett I wanted it to be different from the 90’s, I stripped myself off of it. I would definitely forgive someone like Song Li Ling. As an actor I went far preparing doing Song Li Ling, it would be better to ask Jhett since he is seated there, characters are in a state of trance when they are on stage so I didn’t know.”

There will be only a few days left for M Butterfly at the Maybank Performing Arts Theater. They say they’ll bring more shows now that they have good partners like Frontrow Entertainment. Good or bad reviews, this needs to be watched by more people. I love that they will take this around the Philippines. Go get tickets for the last few nights. They only are going to do this til the 30th.