Sat down with Ms. Joy Lim, owner of famous Charms and Crystals. She started as an accessory dealer since 1995. It was just a hobby for her, she liked it and her best friend had love problems, she wanted to help and in Binondo they only sold Jade, and common charms but none were really apt for what they needed. They saw the need for it - so that’s when they started with lucky items often seen in the house but made it special by using different precious crystals as base. From frogs, crystals, Buddha figures, she is Filipino Chinese so it was like second nature for her.

In Hong Kong she saw how this was done and the lucky objects were just more fancy, attractive and when she took home most of her ware it was sold like hotcakes. Add to that her sudden exposure in popular TV shows on ABSCBN, she became a byline in society when you hear Charms and Crystals by Joy Lim. You probably have seen her name many times in ABSCBN shows.

Not to burst your bubble but the hungry ghost month is not over yet. If you do offerings for wandering ghosts and they actually can give you something in return, this is what the Ghost Month Offering is for. It’s got candles for light (done outside the house), paper money to burn and incense. It’s like doing good deeds that are unexpected, do it every year with your family’s third generation, and you will be lucky. They have a packet available in the shop (which you can also purchase) with the complete items for one person, or for your whole family.

In this franchise, personal consultations can be done every Wednesday and it is FREE but you have to build your own charm bracelet during this time.

If you see Christian symbols on the charm don’t be worried, according to her it builds your faith. She says “We guide out clients and that’s the difference. We do not just sell charms and crystals. We don’t say we have to worship, but it is symbols, it follows the same ideas as nature so the lucky symbols around your house have meaning, it is based also on God’s creations. Crystals can be brought with you, it doesn’t have to be a bracelet like charms in your pocket. These days I have my son and daughters already stable, my family too, this is just my way of giving back.”

Owner Ms. Ria Dimalanta was excited to share her story and says “Meeting Ms Joy Lim was a dream. I am in the construction business and I met her in January. Initially I really only wanted a Feng Shui consultation for my own place and told me things would happen from 3 to 6 months. This talk happened in January of this year and it kind of bore fruit to build this new franchise from Ms. Joy Lim. I was a little afraid we would reach the ghost month and you know those dates won’t be good for business. In May we already set up shop, it was just like magic. I opened before ghost month, we already had a lot of walk ins and it was surprising. We are also targeting Antipolo soon. For me doing charms and crystals is like sharing what happened to me; and now I want to share the same experience with other people. I felt the change and it’s not a fools story, I now have a lot of projects in my construction business and also now own this franchise in Marikina. I met her through a friend and after the consultation, in my line of work I got triple (even more) the luck I got when I started. I believe it was fate who brought us together and by faith our businesses will flourish. It all stems from there, we are working on our second Yang Charms and Crystals branch which will be opening very soon.” 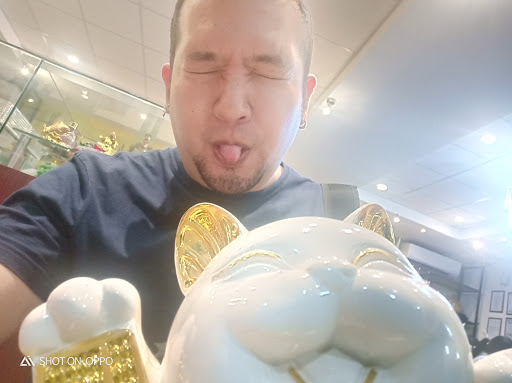 The store’s name is hailed from Yin and Yang with the latter pointing to the bright side of things. Luck definitely exists, but Feng Shui has been practised for years and is a science if you think about it. If it plays a role in your life and makes you believe with intent on how it would bring more harmony in your home and life, then why not right? We have our own free will, let’s use that to make our lives better.

YANG’s Charms and Crystals is located at 116 Lilac Street SSS Village Concepcion II in Marikina City. You may call them via 9597271 or their mobile numbers 09171054146/09491238039. You can also email them via ycandc.yangcharmsandcrystal@gmail.com or walk in if you want to know more.

KUMAGCOW
Fresh Blogs Fast!
Posted by John Bueno at 9:18 AM