Get Ready for Viva’s ABAY BABES

Jade, Emerald, Ruby, Perla and Goldie, names that you would hopefully remember as they get immortalized in this film called ABAY BABES. This is Viva Films hottest offering this year as they take a fun story of friendship, betrayal, romance and love as they prepare for the grand wedding of their friend, but where’s the groom? 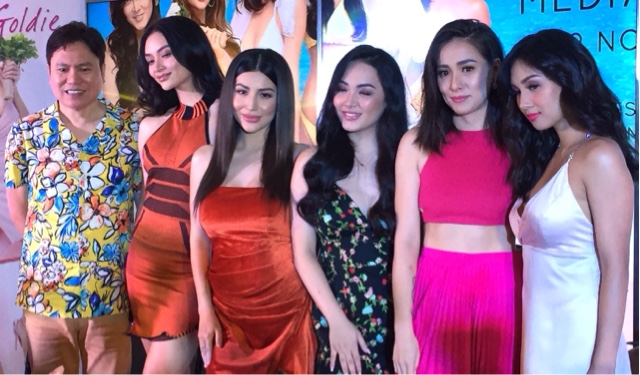 The movie stars Natalie Heart, Meg Imperial, Christine Reyes, Kylie Verzosa and Roxanne Barcello. This started all with a childhood promise of being there for each other. After a few years, one of them (Roxanne Barcelo) was getting married to a guy she met online. She never met him in person yet, so they thought it was just a pretend wedding. This caused a lot of rifts between them, will that promise of being in each of their weddings come true?

Kyline says “I am a nun here, prim and proper, I accepted this because it’s not risky, I can show the opposite character of my previous movie.”

Meg adds “I had to do research with my butch friends because I had to play a lesbian/trans man.”

Roxanne says “We had a talk, we also did a workshop with John Lapus so it was pretty good to do that and practice comic timing. Right now I am not with anyone, I am enjoying my time with family, friends and work, I am very much present and enjoy this freedom.”

Christine says “I had to do a lot of projects on TV both on ABSCBN and GMA, doing drama too much may have associated me with that drama but no, I am actually a comedienne, I feel it’s natural and people poke fun at me and I get back at them easily. I find it fun to do that.”

Natalie says “It was only Christine who knew the whole time that I was pregnant while we were doing this movie. I only didn’t tell them so that they wouldn’t really treat me differently. And really I was just cray, I was temperamental because I was with hormones, tired and sleepless and had to juggle myself between projects.”

Will this just tear them apart? Will the lies, envy, pain all wear them down and finish this friendship? That’s what you should find out.