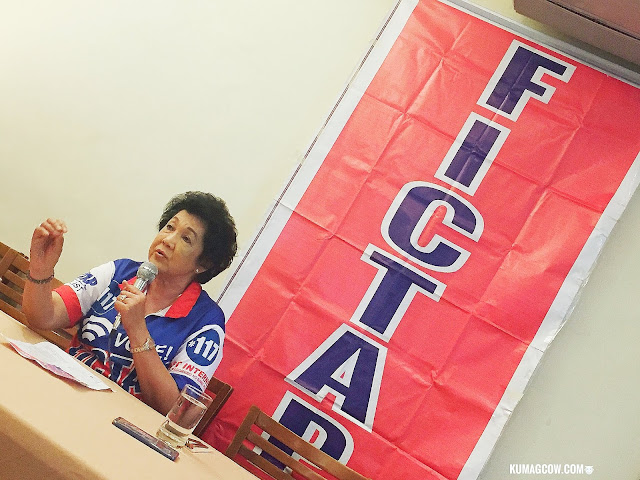 Super early morning talk with the people behind FICTAP, it’s a party list organization pushing for the welfare of those who wish for fast internet, ICT, VAS, Telecommunications, Cable TV and Broadcast Media. Now I haven’t seen anything like this but I’m interested in why they are representing this as a sector.

They want laws passed for improved public wifi, to let more people have access to information at a faster, more efficient rate. They also propose a cellphone users act for consumer protection so no telecom company would advertise falsely about unlimited promos, plus a custom sim card act to specifically create ones that would be offered for OFW’s, Senior Citizens, Teachers, Mothers so they receive appropriate discounts and promos. They also want a separate online sellers, buyers and freelancers act to further strengthen the e-commerce industry plus a stricter anti catfish law for those unscrupulous individuals who would fool other people in social media and attempt crimes. It’s a long list of things that would benefit a lot of people which Estrellita Neng Juliano Tamano, the nominee who grew up in Cotabato, Cecilia La Madrid Dy who hails from Isabela and Jose Del Mendo of Pangasinan and Rolando Olog of Samar wants to represent.

Ms. Tamano says “We hail from regional Cable TV operators and also do cable internet. Federation of Cable TV and Telecommunications Association of the Philippines. I operate mine in Cotabato, Cavite, Manila and Pasay. They filed foreign equity on cable TV so we separated from the giant corporations. Cable TV is both communication and broadcast and now we do voice, data, and they were not able to pass foreign equity bill. We as micro and small medium enterprise have a different vision and we implement public wifi in third to fourth class municipalities, public schools, dswd, libraries, bus terminals and we are still doing that. We are asked why we are doing this but as a 20 year organization, we have thought of making progress and implement not just in the countryside but everywhere else in the country. Other countries have already done that, we have the capacity to make this happen and we know how to do it. We want to improve the existing free public wifi and not just 256kbps. The republic act dictates only two networks have gateway access, and only the big corporations have that through marine fiber (from other countries). We tried talking to them but the landing stations require you to put a lot of money through the two networks. You have to pay them a lot before you can get access to it, if this was open, it would be better. We have already put our position papers, we won’t be able to fulfill the landline requirement because it is a dead industry. Our neighbors have the fastest connection but we lag behind in implementation. We know cable internet from A-Z and even know how much it costs, but we want this advocacy because we need this for the industry and all progressive have it. We can do it in the Philippines. There is no law also in losing your prepaid load, so if it happens there will be no protection. We also asked seniors if they have Facebook or use the internet in one forum, they all raised their hands, but nobody gets their discount as accorded to them by law. OFW’s too pay for roaming charges and don’t get affordable ways to reach their families. The youth and students on the other hand can access restricted sites, teachers need to check their email everyday but don’t have budget for it, getting online is a chore and expensive. E-Commerce is also booming but there are no protection for consumers, for businesses, people fool other people online. People get killed too, we have no laws on most of these things because they are worried about how they would be asked and have no knowledge about it, but we are experienced with it, we know how much it costs and Filipinos would benefit from it. FICTAP Partylist is 117.” 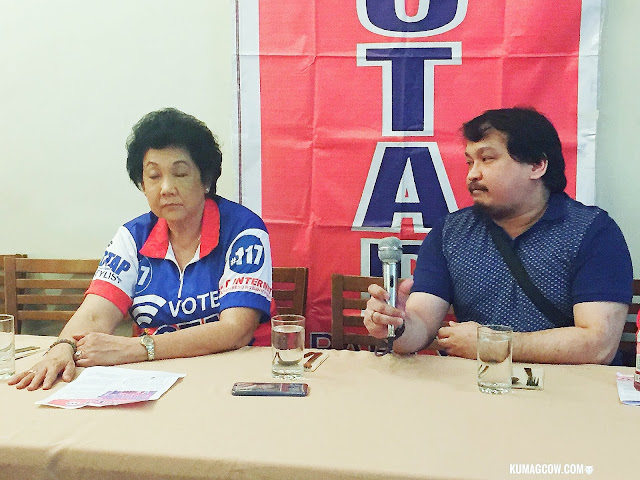 If that is your cup of tea, make sure you research further and see of they would represent a cause you would benefit from and you are also passionate about. I am in no way endorsing them, but maybe you can consider them if you think they make sense.