He's got over 13 films on his belt, and very well known for critically acclaimed "The Dance of Two Left Feet" in 2011, "Culion" in 2019 where we had the pleasure of covering in Palawan and recently "Hulagway" which he worked with NCCA a couple months back. This time, it's a whole different movie, his first commercial film, on a different genre which he divulges was the handy work of the late well loved producer Shandii Bacolod who also worked in this movie. It's called CALL ME PAPI, a funny "barkada" movie where 5 men from different walks of live, get their stories intertwined.

The project was supposed to be released a few years ago but the pandemic happened. This prompted them to re-think how they would finish filming, and when things relaxed a bit, another hard lockdown was placed (prolly around November 2020). But nothings gonna stop them from doing it.  This is produced by Feast Foundation and will be distributed by Viva Films.

Dr. Alvin Yapan says "What I like about this project is that some of my friends say they couldn't concentrate on looking at just one guy in the film. These guys are good looking and I think it was meant to feel that way when it was thought about by Shandii Bacolod. This was intentional, to put guys with different looks, in this generation, so they get well represented in the film. There's one that came from the province, a bougie one, a gym instructor, a waiter, a bartender and a call center agent who was forced to live with each other. This discusses what they go through with the work they do. Shandii already worked with Enzo Pineda in Utopia. We got him to audition for this film because I didn't know him prior to this. He did so well in the audition, he had presence, he wasn't nervous in front of the camera and he was pretty tall. He was meant to be part of the lead cast. Even after this film, I would really like to work with them again because of how easy we got to work together. I don't know why but I've always landed in projects that have an ensemble cast. I couldn't complain in the looks department, they also have a sense of comic timing. They also have formed the dynamics, but to tell you honestly, this was one of the most difficult films to cast because it required a lot with the actors. We've gone through a lot just to put them together." 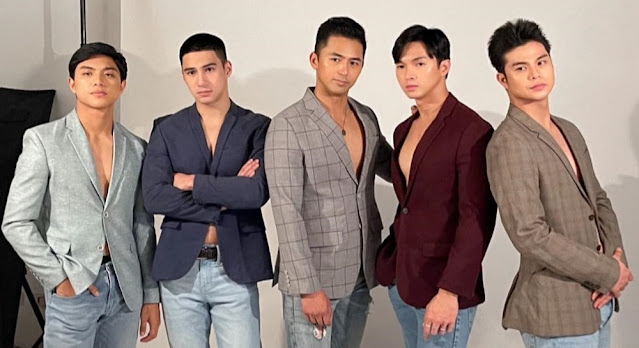 He adds "Royce was always a joker on set, Aaron was so lean and fits his character like a glove, Enzo was caramel, Lharby had majestic physique, Albie had the perfect abs. I had Albie read the script and when we talked later on, he really liked the role of the waiter. His story arc is a little different than the others. I'm glad that none of them were problematic on set, that when I instruct them to do things, they oblige right away. I connect more with the character of Royce, as I can relate more with what he was going through. I can't really tell much because it might spoil the film."


Dr. Alvin Yapan wants this to showcase how friendship works, how you can trust each other when times are hard, when you treat people like family. There's a lot of promise in this film, and later, we'll get the chance to talk to the cast. This by the way stars Albie Casiño, Enzo Pineda, Lharby Policarpio , Aaron Concepcion and Royce Cabrera. This will be something that will be in several parts, and designed to be continued in the future. It will depend on what would get the interest of the audience. So make sure you get heard on their channels if you want to know more about the boys.

This comes out on December 7, so see you in theaters soon!