KPOP Group FameUs and Asha Set to Perform in Manila 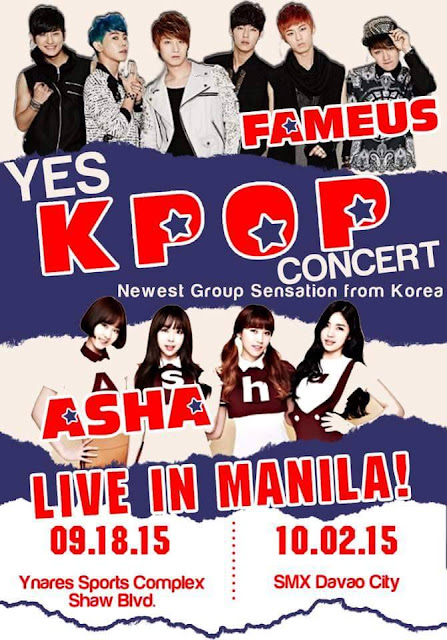 It looks like the KPOP fever is taking Manila by storm as the newest KPOP sensations from Korea FameUs and Asha are set to perform on September 18, 2015 at the Ynares Sports Complex at Shaw Boulevard in Pasig City. They will also be doing a second show on October 2, 2015 at SMX in Davao City. Their concerts are organized by the Zoomanity Group from the Yupangco Group of Companies, Yupangco Exhibits and Shows aka Y.E.S. and Redstone Media Productions.

For those who don't know, FameUs is a six piece boy group that's got good looks, and great singing voices. Their members are Han Saem (Seo Han Saem), Jung Hoon (Choi Jung Hoon), Do A/Doah, Kudo, Daeyoung and Hanyoung. They've been here in the country a couple of times not just to perform, but to do charity work indigenous aeta tribes, children with cancer and others. Through their visits last February and April, they went to different communities to share their blessings and provide inspiration to countless Filipino youth. Mind you, they were just formed late last year and feel that it should be a part of their mission not just to provide entertainment, but also help communities, kids, with special needs. They've already gotten a big following in the past few months and this concert is just the opportune time to get to know them while they're here in Manila.

ASHA on the other hand released a few months ago their newest music video "Mr. Liar". They've gotten really good reviews with their very inventive approach to music as their production has given them the lee way to do so. Da-ae, Yoha, Nara and Hyun A promise to give you a good show on the dates mentioned above and even will perform in Davao in October, something that KPOP fans in that city shouldn't miss!

They are still calling sponsors for the shows, if you wish to become one and take part in this great opportunity please call TAG Media and Public Relations at 09166299381 or email them at gracenicolas@yahoo.com for more information, also on where to get tickets to the show.