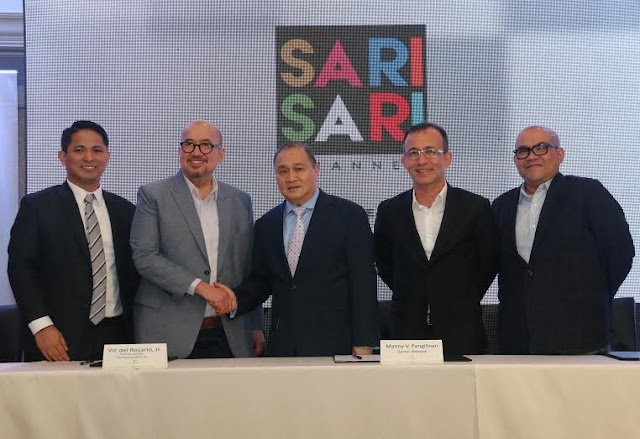 There's a new chapter that's about to unfold in the entertainment landscape in the Philippines and it's going to come to your homes sooner than you think. Two broadcast and entertainment giants Cignal TV and Viva Communications Incorporated just inked a deal a few days ago; bringing in 24/7 a humongous amount of movie and TV programs for countless Filipinos worldwide. I'm sure there are a lot of pinoys and other nationalities that would want to watch these shows so they could get a glimpse of what's hot, up and coming with Philippine entertainment, and what our artists would have to offer. The two companies promise to bring to the forefront a multitude and massive amount of drama, action, comedy, suspense, thriller and adventure shows designed to make your relatives miss home a little more. It will officially be called the SARI-SARI CHANNEL.

They'll also include some great Studio5 productions starting with Alice Dixon’s The Lady Next Door, the one and only Superstar Nora Aunor’s When I Fall In Love of which it is a reunion with her still good looking onscreen partner Mr. Tirso Cruz III, Jasmine Curtis-Smith and Daniel Matsunaga’s show Replacement Bride, the acclaimed actress and model Angel Aquino and actor Derek Ramsay’s Bawat Sandali, Gutz royal princess Sarah Lahbati’s More Than Words and TV5's premier actress Jasmin Curtis-Smith and international singer and hearthrob David Archuleta’s Nandito Ako of which you'll see real soon!

Oh and of course, you'll see those great VIVA movies that have topped the Philippine box office charts. They'll also be lining up tons of interviews, bits and pieces of your favorite box office stars life behind the camera. So don't even miss a minute of their shows, don't be afraid to get hooked and be ready for SARI-SARI Channel, they'll be coming to your homes very soon!

For more information about their plans: