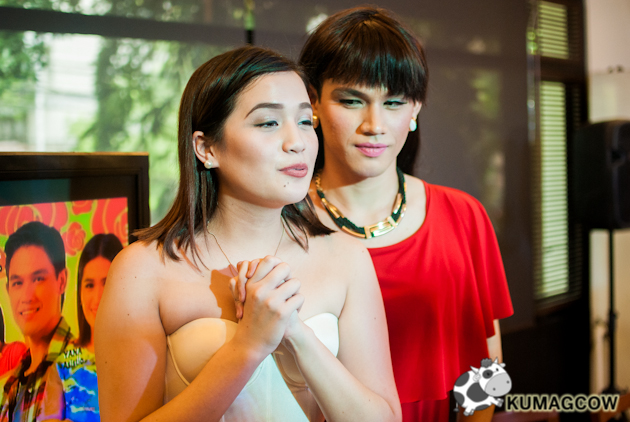 You're good looking, you have a successful career, you have tons of ladies and the only thing that's wrong with you is your relationships. You were accused, you supposedly got someone pregnant and now you're in hiding; but since you're a little famous, it's doubly hard to do that. What do you do if you were in his shoes? 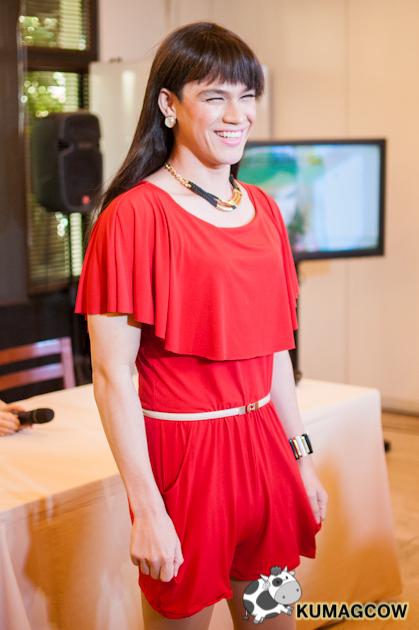 Well, Keifer (played by Martin Escudero) had a different idea. With the help of his friend, he dropped his pants, took off his shirt and replaced it with..... a mini skirt, hot red blouse and full on make up! Okay! Now that's crazy! Instead of seeing the the old playboy slash hunk slash good looking guy, everyone will meet Keira. 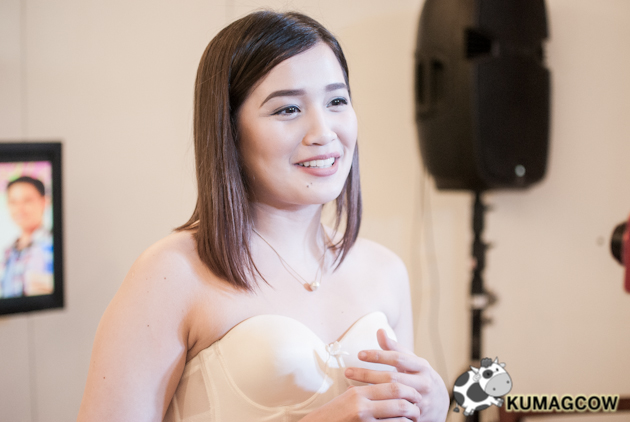 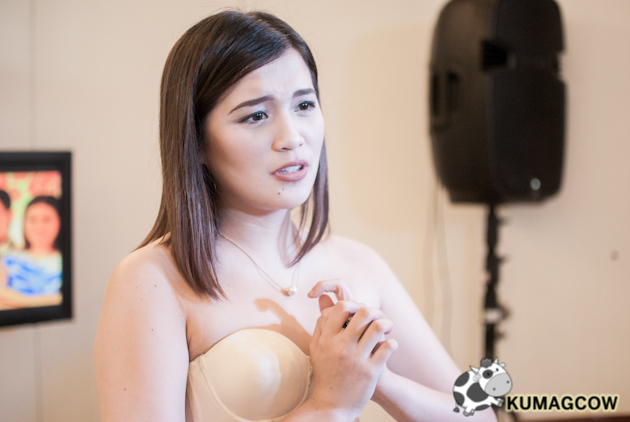 Keira is a tall, strong, spirited dancer. She's pretty and seem to be in a budding friendship with Aeone (played by Yana Asistio). In this installment of Wattpad Presents, they're not just dealing with the drag queen concept, but will also try and put in a love story in between. In different times in the story, you'll see Keira slowly getting attracted to Aeone, where Aeone was even getting confused already about their sexuality. Now how will they be handling this if some other people come into the picture and divulge what's really happening. Will Aeone be disappointed with Keifer if she finds out that he already got someone else pregnant? The plot thickens. 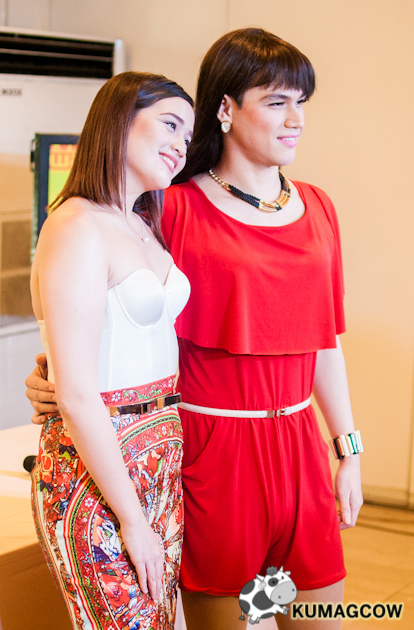 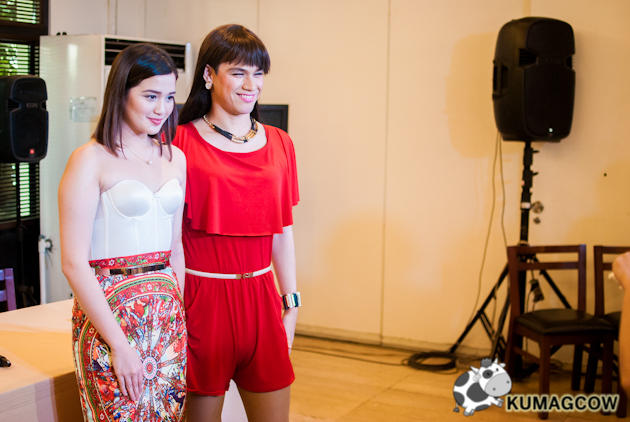 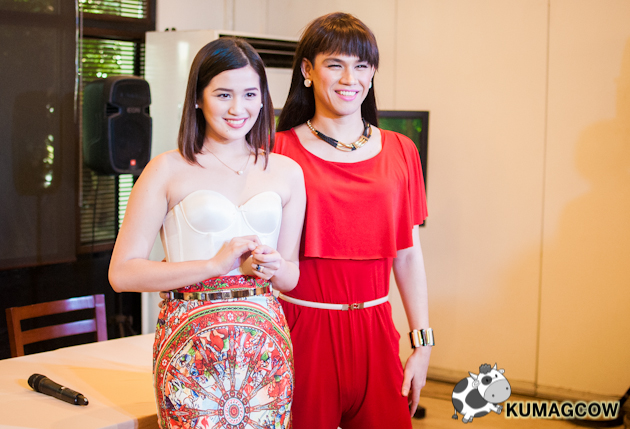 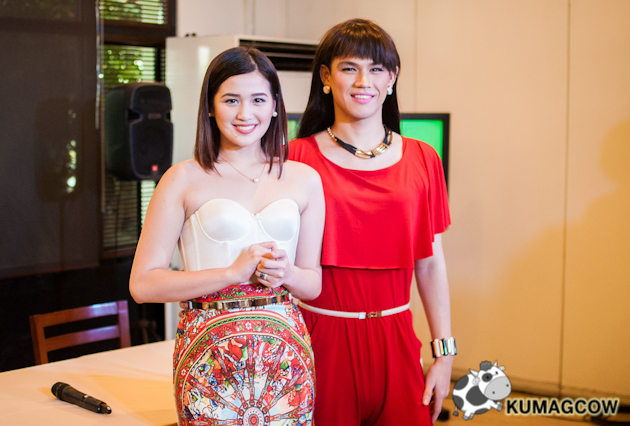 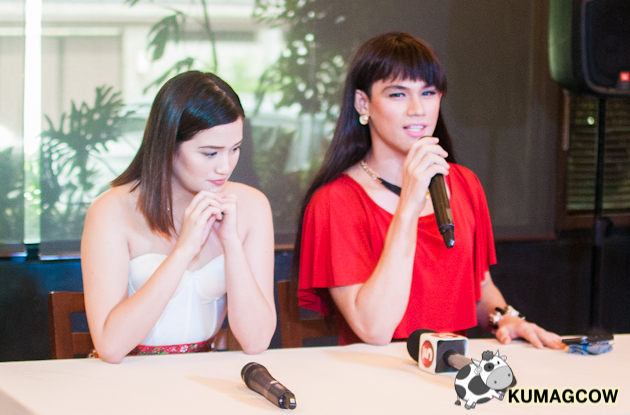 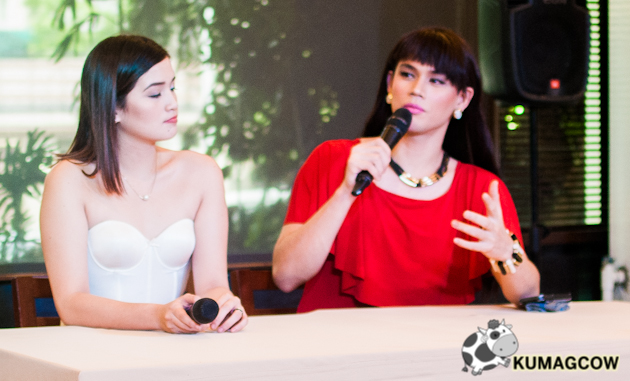 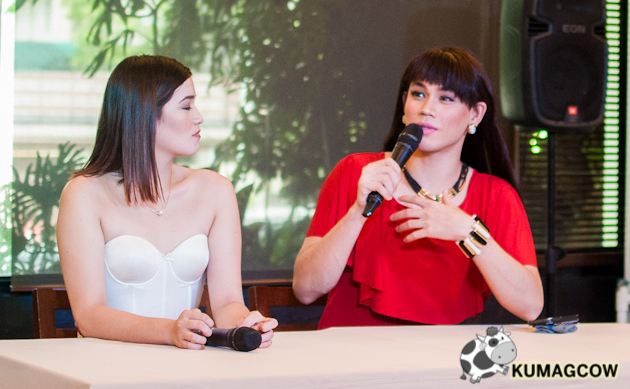 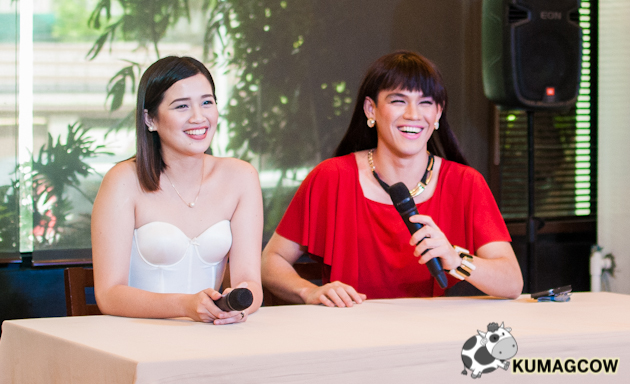 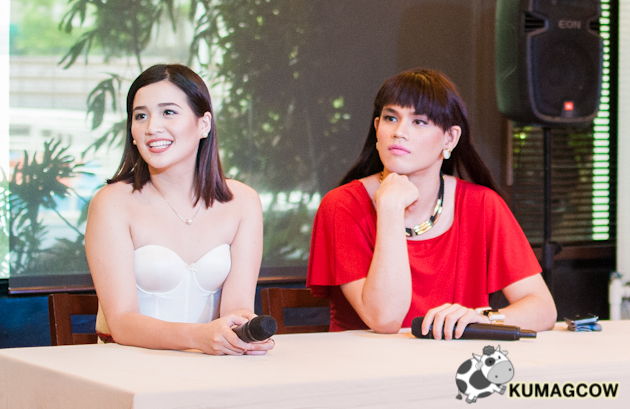 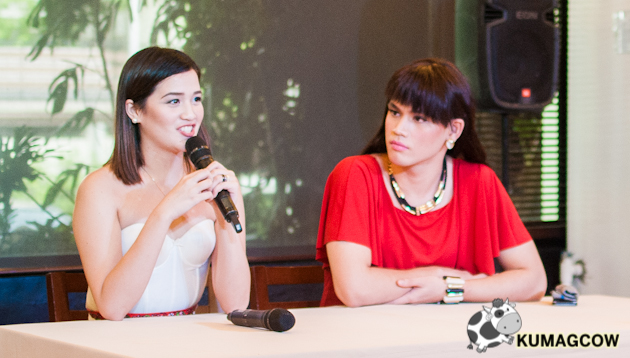 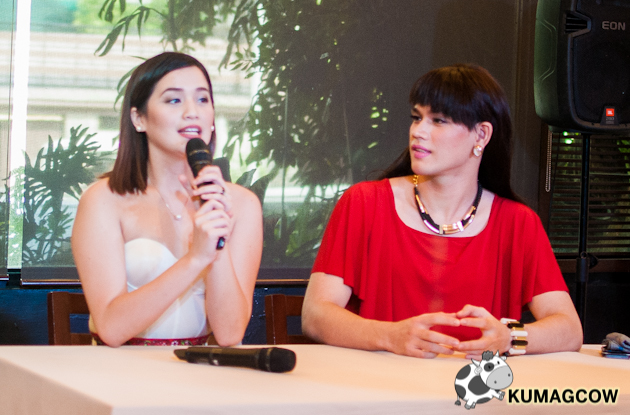 During the blogcon, Martin Escudero says "These are exactly the kind of roles that are very challenging. I could identify these roles with King of Comedy Dolphy, Eddie Garcia, and a lot of other great actors that have never said no to these kind of characters. It's definitely challenging and if there's something that I've learned from the same kind of role that I did a few years back, it's not an easy thing to be in the shoes of women. This story is also a bit different, because the previous one is about a gay guy and in this one I have to act as if I'm a lady so it's a little tame. I've known Yana for a long time, we're friends, but she was this little when I last saw her, now she's a lady and we're friends but it's nice that we're doing a Wattpad Series because we could talk and get more close because of this project. I was very comfortable doing this because we didn't have those awkward moments since I could talk to her and she helps me a lot when we're doing a sequence on set. She comes prepared and knows the story. I would definitely like to work with her in other projects soon!". 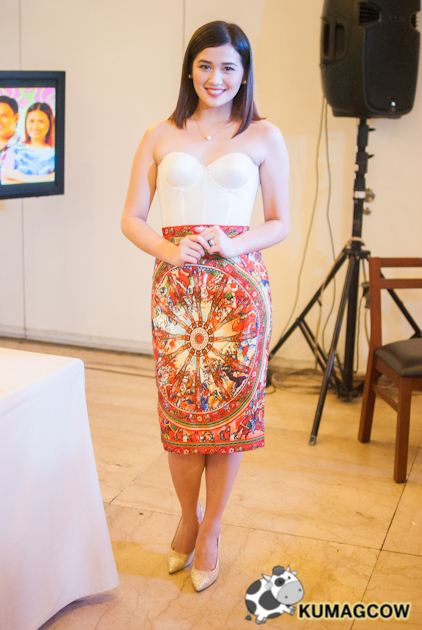 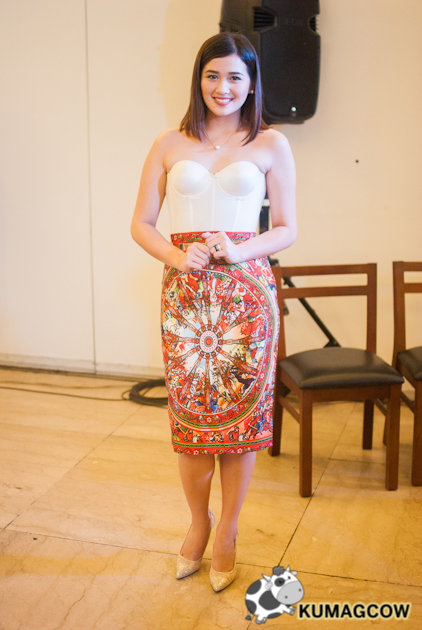 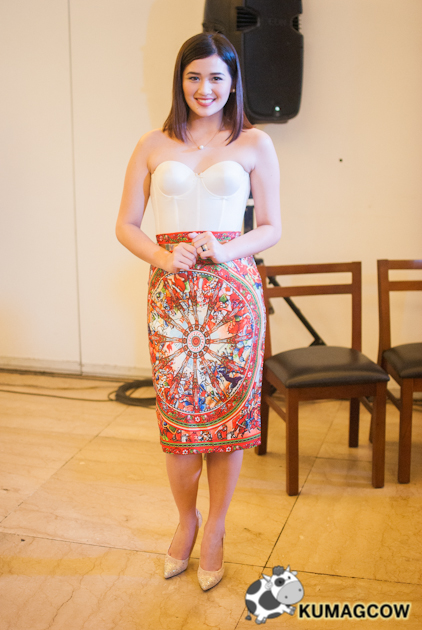 This is the first time I'm interviewing Yana and I haven't really covered her previous projects, but now, she's part of the Star Magic Angels. In this group she says they're going to take more serious and matured roles compared to what they've been doing in the past. Aside from that she says "When this Wattpad episode was in the plans, I asked my handler and management about doing this and I was all for it. This is also where I started, so I did ask permission. My sister and I laugh about this career thing but I know she's more into acting than I am. But when it comes to comedic timing I think that's where I excel, she's aware of that.

We're not pressured at all because we are trying to do this individually, although I can't discredit the fact that I am being known because of my Mom and Dad, I'm doing my best to be known for what I do, but as much as possible I want to be known as Yana alone. I'd want to concentrate in Sexy Comedy since I'm a Star Magic Angel, and these past few weeks we've been doing a lot of promos and workshops for that. They won't tell us their plans yet but they definitely have projects lined for us, we have different shows though. We're clearing up that we're not really a group.

I hope TV5 offers more shows. I really want to do that, I want to work with the people I worked with in the past. I don't know the reason why I blush a lot when I have a scene with Martin even when he's in Keira's character. I almost thought I was going to be butch. We've been friends for a long time, working Martin Escudero is so fun, I'd like to work with him again soon. I don't know if that kissing scene is going to be real or not, you would have to watch the show. I haven't really had my first screen kiss yet, if I had a chance to do it with someone I'd like it to be with Sam Milby in ABSCBN but in TV5 it'll be Martin, in GMA it will be Alden Richards hahah! I've been requesting this since last year and I'm so glad this pushed through!" 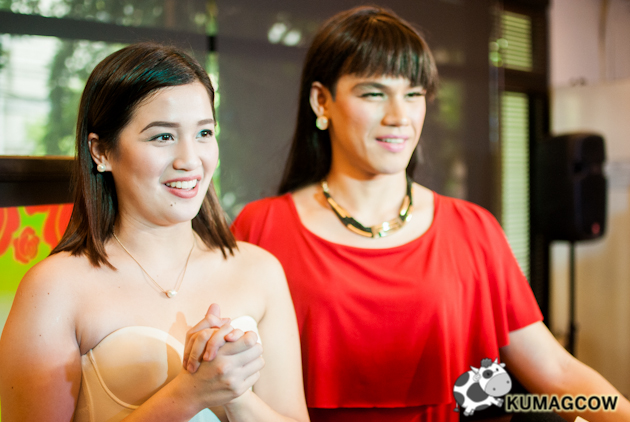 Wattpad Presents: Pristine Academy will start this Monday August 10 at 9PM and end on Friday, only on TV5. I really hope they get to do another project, like a show of sorts and become something more than just a screen pair. Martin is single, he's pretty busy with his career but if it comes he says he doesn't want a temporary one and opt for the last and serious ones. I heard from the grapevine Yana likes him, so let's just see if they have chemistry on screen this week on the happiest network in the Philippines, TV5!