Maja and Zanjoe Does To Love Some ”Buddy” 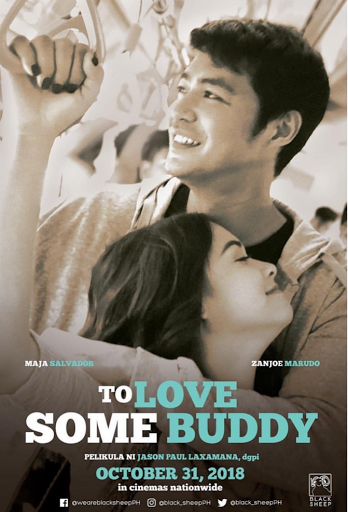 Funny and so confident with their answers, we asked questions to Maja Salvador and Zanjoe Marudo, as they tell us a little more information when they made the upcoming movie TO LOVE SOMEBUDDY. It’s a story about two best friends going to that next step in falling in love, a plot that may have been said so many times but they say theirs is a different story.

Here’s part of their interview, sorry there is a nutjob who used his monopod in front.


Maja Salvador said “This would be nice to set an example for friends who would like to go that extra mile, to go the next step and love your best friend. It’s a nice feeling if it works; because it is uncommon to be with someone you are extra comfortable with them. In line with Blacksheep’s very millennial market, this would be something fresh because we haven’t really done anything or paired up, I was wishing for an MMK episode but this happened, when this was offered it was a little crazy because Zanjoe’s schedule is not fitting the bill, I guess it all worked out in the end and it was meant to happen. I could say it may be a best friend movie, but every best friend has a story. I hope we get that same vibe, the happy feeling. Every time we do things we are asked about the artists we work with, when I was asked about this film, I said yes, even if they were hesitating to ask me about it, I said it’s okay and I don’t mind even if they try to connect that past story.”

Zanjoe Marudo says “I am scared but excited because it is a new pairing. It’s easy to do it with Maja because she makes it easy, together with the creatives and Direk, they have crazy ideas and it’s chill on the set. I could call this MajesZ, the dancing duo! I am so happy for the previous projects, I am not thinking of any pressure since they have done quite well with the CarGel movie. Everyone waited for that and we too wanted to see it. Finally they did it and Blacksheep made that film, this would well be a good thing to follow that since they were able to do good in that film.”

Jason Paul Laxamana the director says “The situation is hilarious, this is a story that may have been told so many times on Philippine cinema but for those who have already seen it, it’s very funny.”

I haven’t watched this yet but judging from all the projects of Maja Salvador, this would be a nice team up on screen aside from seeing them merely bonding in events. This is their first try on screen, a good director and fun to see how it all ends. Zanjoe loves Maja’s teeth, while Maja loves Zanjoe’s feet, go see if it’s possible to fall in love with your best friend.