Senatorial hopeful Angelo De Alban met with us this morning for a short meet and greet. He was apologizing because he was late as he was attending to matters about a disqualification case that was filed against him at Comelec/courts.

He says “I am a lawyer and teacher by profession, I have a lot of enemies but I have helped a lot of teachers and ordinary working class people. I was also a journalism major in the past so I have a close affinity to the media. The thing is, politics should not be partisan, I am young, about 37, only millennial who is running for office as an independent. I hope people would see me as person with the same mind, same way, as a new breed. I am not old, I have been doing law works for quite a while. I am an advocate of PWD’s and education for people with special needs. I got hurt by politicians whom we helped in the past but didn’t work on our plans for assistive needs. We hope there is active participation in government and also put a stop to TRAIN law. It wasn’t studied further to address current and immediate problems. We live day to day and do not have millions or billions of money, I am someone who wants to be independent so I could work with them both. I want bloggers and the media protected, to work with cyberbullying matters and we have to re evaluate it as it affects and regulates freedom of expression. We all age, we have to integrate also the plight of media workers. I was surprised to receive a petition indicating a very degrading remark against teachers and lawyers. They also indicate that I do not have the capacity to run a national campaign but in the age of internet you can already do all these things. We have sent our reply and I hope they read and understand the qualifications and dedication I put it to rest. I want to look for people who can relay the message, not to be fooled by looks alone and we are deliberating on who could do that and I want improvement and change. Change can be good or bad, for endorsers, we have three in mind but we are still in the process of choosing who can do what I have in mind because I have law experience and I have been doing that for years. We have a labor code but it is lacking, actors and actresses depend on the projects and can be bullied to work. If they are guaranteed not to be abused, that would be good. Government should also actively regulate it as more contracts even have long hours (ordinary working class) and talents are no different. I watch films since I was a kid and I do know a lot of them try to raise funds because they do not take care of their health early on. We have to make laws that are applicable, laws that work because it’s what the industry needs. We need actual government assistance for psychological help, it is limited and we need institutions that could handle syndromes like it.” 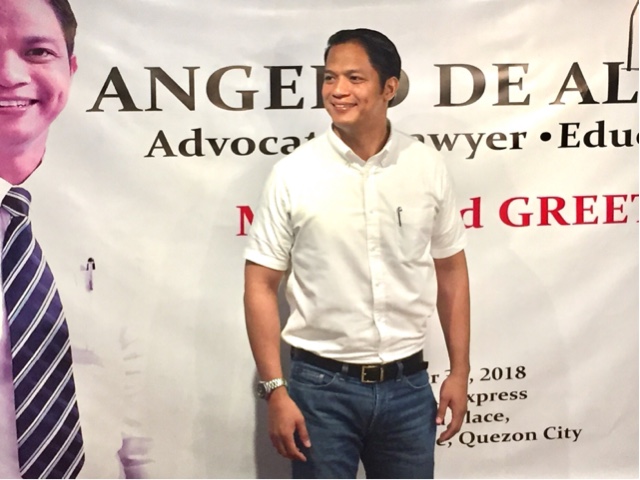 He wants people to get to know him better. With the articles on the internet picturing him as a crazy guy who wants to run for office, meeting him practically made us see he’s a normal person like you and me. He’s just got law experience and he has work done in the pontifical university to back it up. He looks so passionate too about this, he says he has to be consistent with it and it enables him to look further to protect peoples lives because of his background.

Is it time to elect new breeds and good guys perhaps? How could they win you think? That should be something YOU as a voter should probably know, he advises we should be discerning as a people and know what’s fact and what’s not.