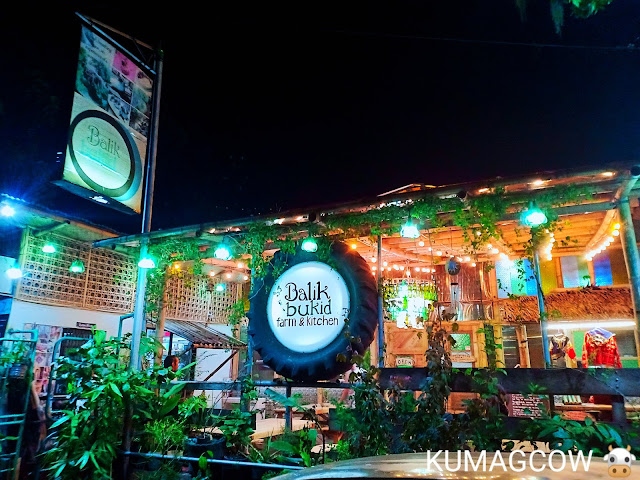 I wasn't planning to do much in Davao but after the earthquake on June 1st, the goddess of Davao blogging Ria Jose told me that DFAT (Davao Food Appreciation Tour) was happening this weekend. I was planning to do this two years ago but didn't have the time but I guess it was just fate that the event was happening today. I joined them last night for dinner at Balik Bukid Farm and Kitchen Restaurant over at Davao's Sandawa area which was a few kilometers where I stayed in Roxas, so I jumped in the cab and met a LOT of bloggers from Mindanao in one fun night. :)

They were a VERY happy bunch, and the restaurant we went to had so much to offer than just good food. It was much of a culture trip and several artisans of this region actually thrive in this place. They've got artwork, pieces to buy, and the whole place too wreaks environmental responsibility, love for nature, as weird as that sounds. The banig ceiling, weaved wicker baskets for lighting, the plastic bottle laden walls, the magazine napkin holders, Oishi Placemats had me smiling ear to ear because they managed to put this all in on a working restaurant. 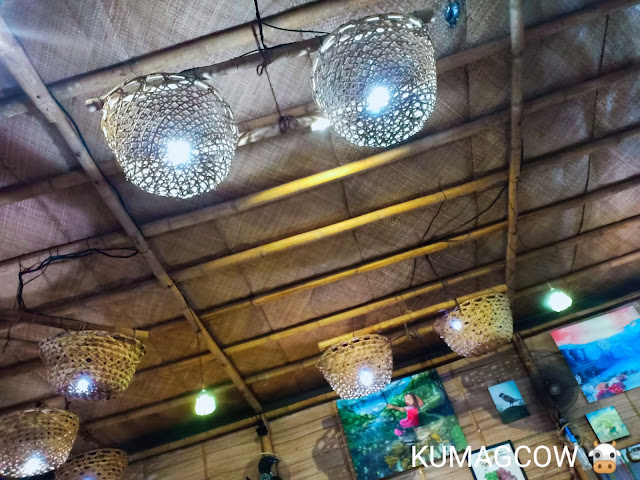 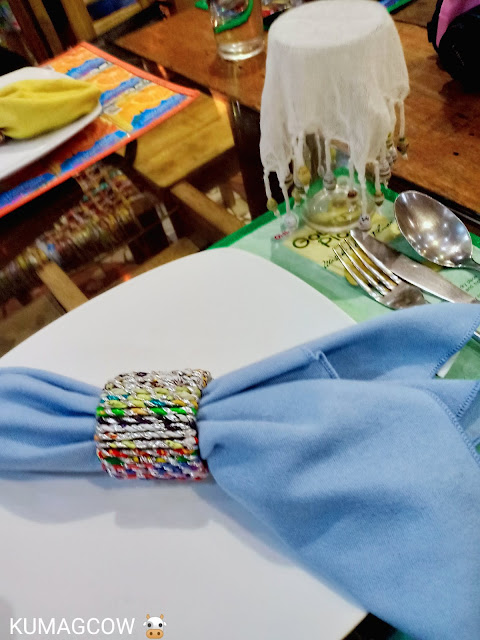 Their menu too was an old game board (one of my favorites Snakes and Ladders), which you can open and pull out to see what they serve in Balik Bukid. The namesake of the restaurant means going back to the farm, so pretty much, it's a farm to table concept, fresh as it gets. 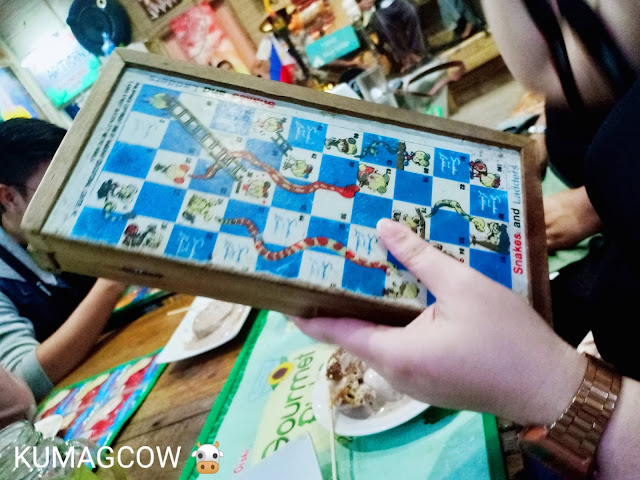 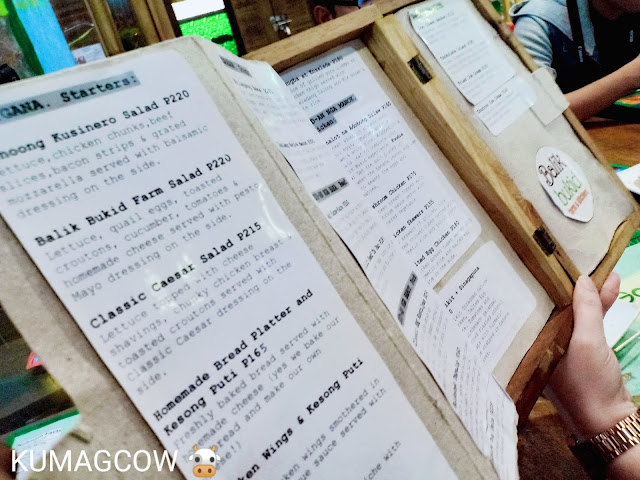 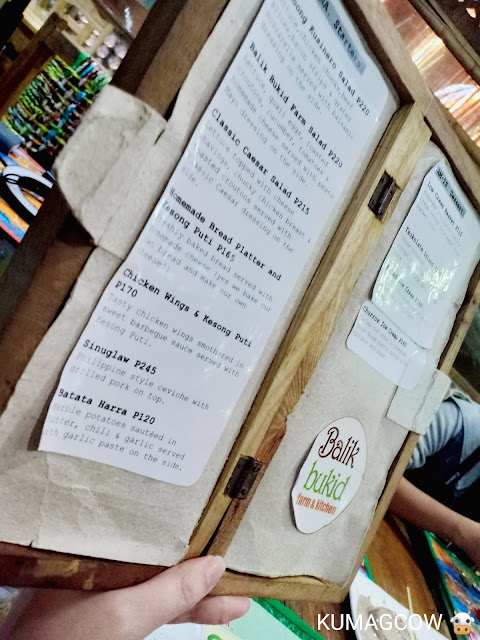 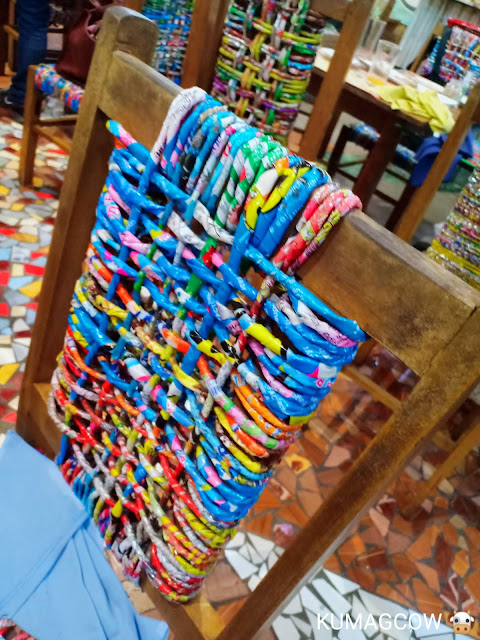 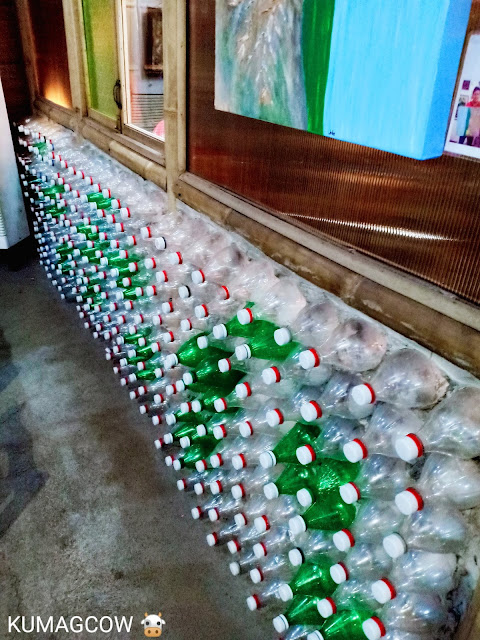 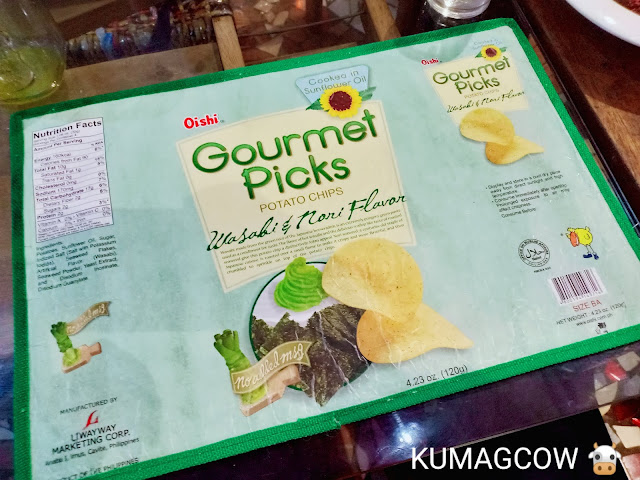 I felt I was in a museum, a native one so you kinda get the feel of a very Filipino theme, this would be nice especially for balikbayans and those who have foreign guests, this was a nice introduction too to Davao cuisine. I was eager to try that when the food started rolling in. 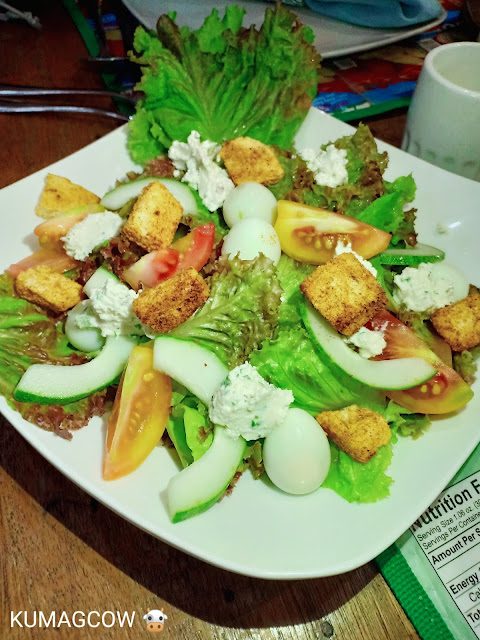 This is the Balik Bukid Farm Salad. It reminded me of a good Waldorf but they used different textures from cucumbers, tomatoes, croutons then highlighted by quail eggs, home made herbed white cheese. It's basic but done right which is in the line of their farm to table concept. 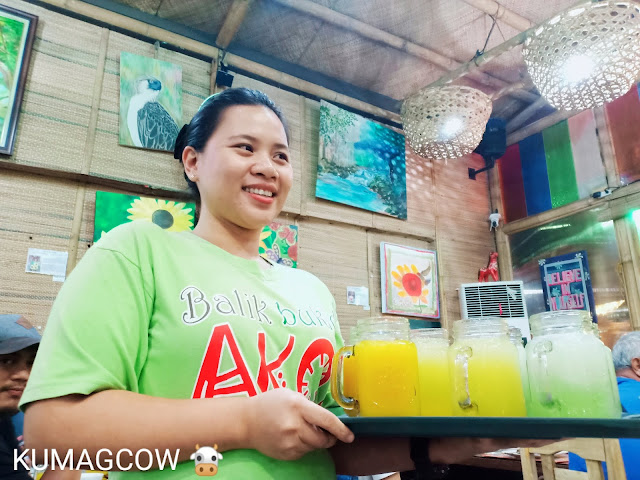 The kind lady served us Mango, Cucumber and Calamansi Juice. It was pretty hot outside so this was perfect, they make it not too sweet, very refreshing, a good thing. 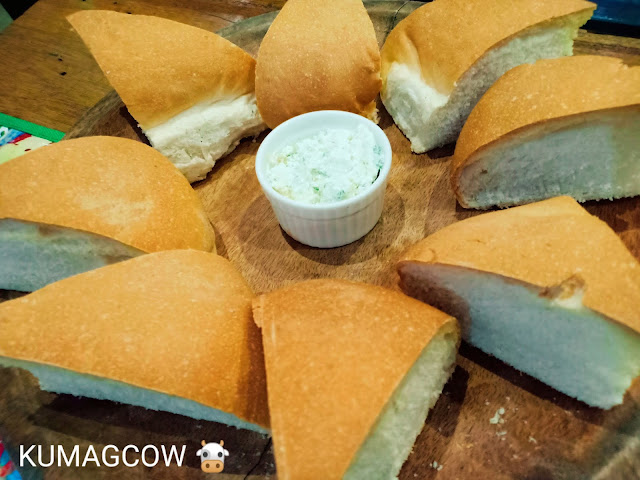 The Homemade Bread platter was light, if you are in a group of 4 or more, I suggest this as a filler so you wouldn't have to have more carbs LOL. 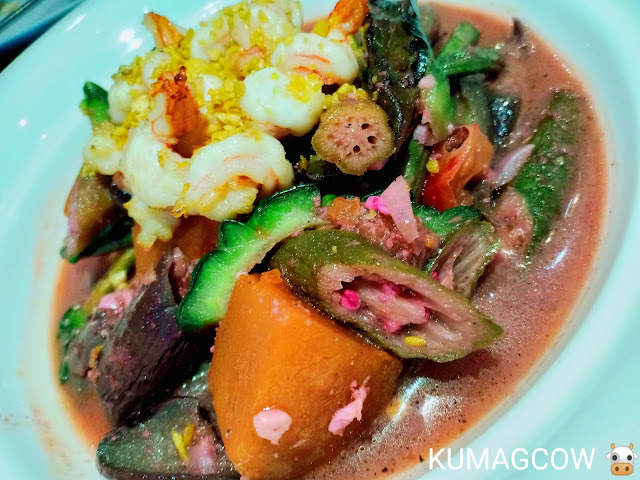 Their Pinakbet is very different, I was wondering why it had a pink hue because it ain't common in Manila. They told me it was because of the bagoong they use in Davao which was usually Shrimp paste from the region. This stew is a good representation of what fresh vegetables is also in this place and they cook it a little bit al dente, I couldn't believe I said that on a non pasta dish. 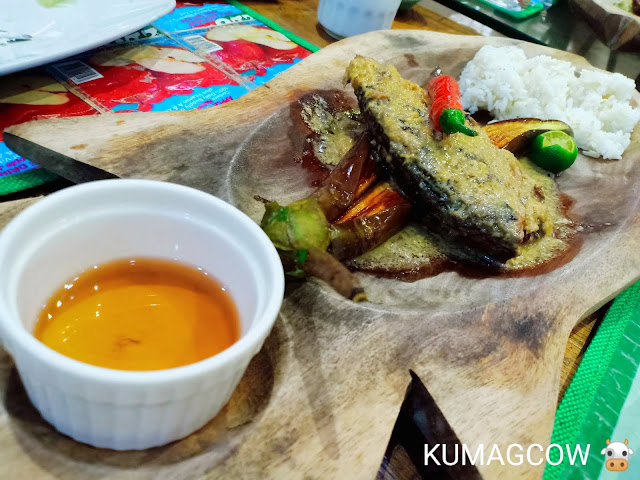 This is their Sinaing sa Gata. You get little bits of cooking from different regions, and this one reminded me of ones we eat in Batangas. They usually cook this in a batch using a cauldron, water and spices til it dries out. Their version had coconut cream on top so you get hints of nuttiness in the sauce. It's perfect on hot white rice, make your plans for diet tomorrow, this is good fish. 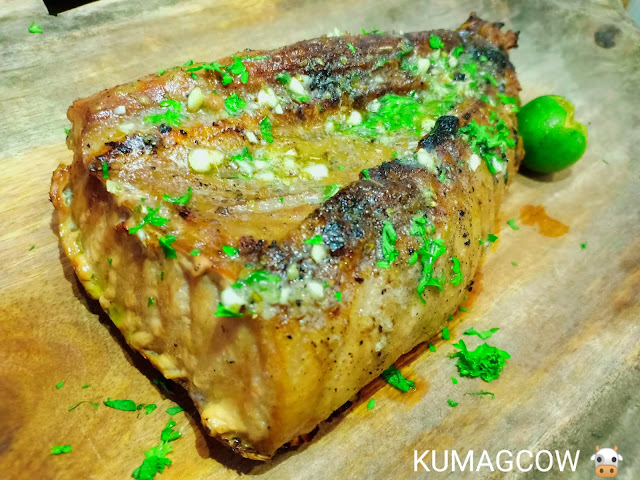 You can't go wrong with good fish meat, this is their Tuna Belly. Grilled fatty wonder which I would pair with their blue rice. I'll tell you about that later. 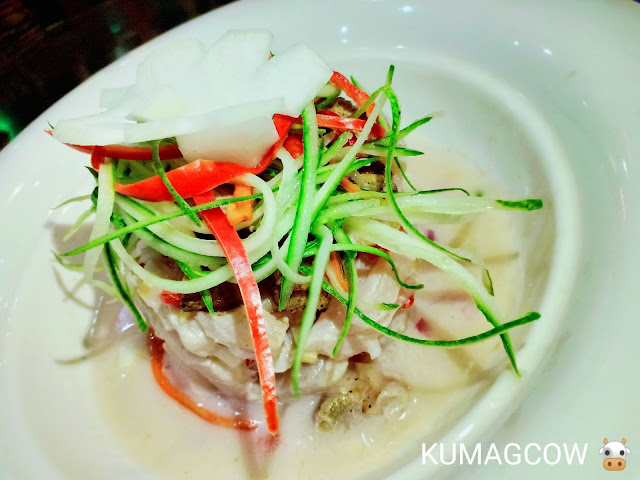 Sinuglaw has fresh raw fish, but it is cooked with vinegar and is always a staple in drinking sprees in this province. It's got grilled pork belly underneath so you get a fresher surf and turf in a sense. Loved this a lot. 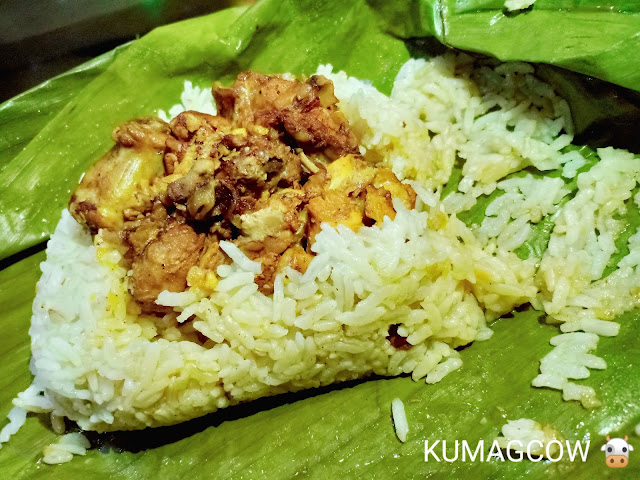 This is their Binalot na Adobong Dilaw, one of my favorites that evening. It gets its color from annatto seed oil which envelopes the rice nicely. The Binalot concept is usually from Farmers who want something handy before tilling the fields, adobo lasts long even without refrigeration and they also added a little salt on the second banana leaf layer so you adjust the saltiness to your liking. They've got lots of comfort food on the menu. 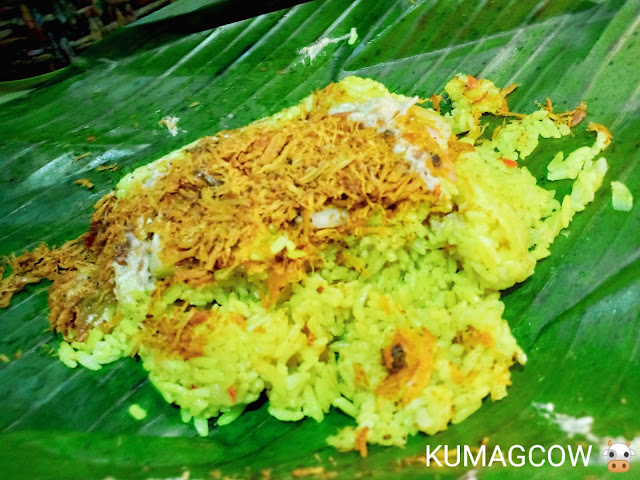 This is a Maguindanaoan dish called Kagikit. It's made of shredded chicken meat which they prepared a little spicy. I like the kick it provides so it is officially my winner. They don't eat pork I think hence this dish, if you're alone or just wish to taste something different on the menu, this is definitely recommended. I skipped my no rice diet for this and it was hella worth every morsel.


They seriously do their marinades differently because the meat tastes so different in this Sinugba Pork Ensalada. It also had eggplant and tomato salad on the side plus a nice amount of rice as well. It's like a Happy meal piled up waiting for you to have it. I think it serves one but you might as well share if you have other things ordered. 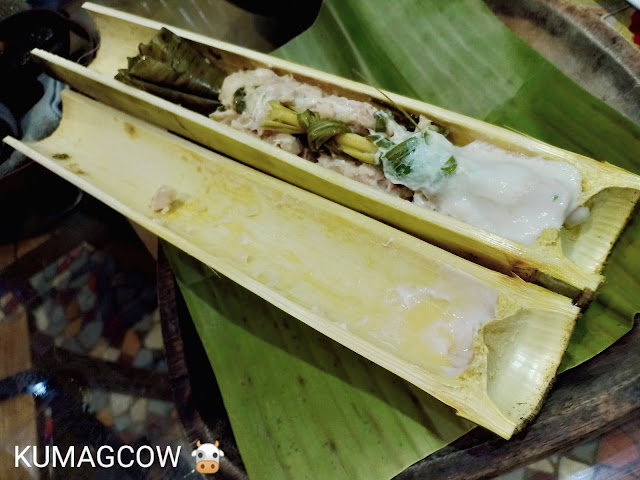 This had lemon grass and a bit of ginger, the chicken dish was cooked inside a bamboo over fire and the actual bamboo secreted its sap hence getting more flavor from this dish. Sans presentation and all, this by all means is good. (Note from the Chef: The dish is called Tinalumbo. It’s a traditional food of ATA tribe. They are doing a fund raising and promotion of their dishes. The tribe itself makes and cooks the dish outside our restaurant.) 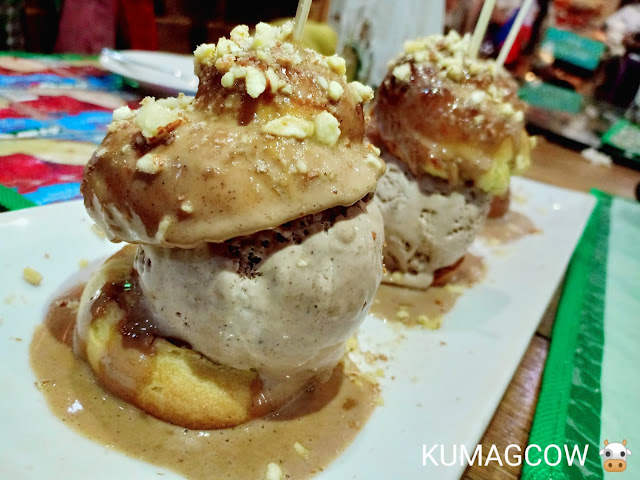 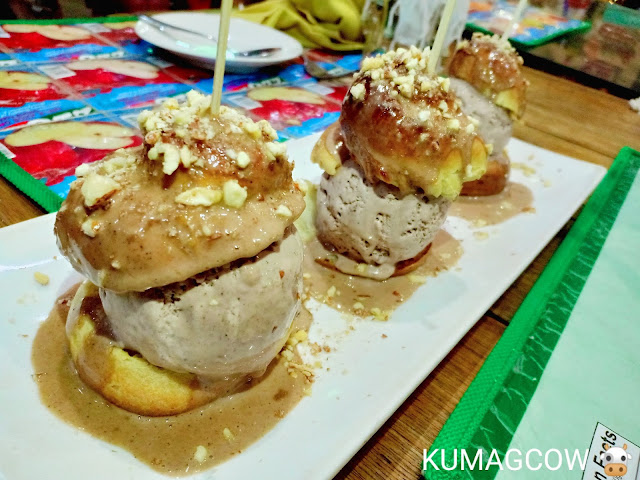 They call this the Chocolate Island. It reminded me so much of ice cream and local bread from childhood, but theirs were home made Tables Ice Cream (worth every calorie) that had every bite get that slightly bitter hint from cocoa beans. Their bread was a tad toasty so you get different textures in this treat. Do not leave this place without having it.

Oh and they've also got artists dish out their musical instruments to provide entertainment in this joint. I enjoyed this a lot and I won't judge you if you're in the mood to also dance, they encourage it.

The chill vibe, the super artsy ambiance, the respect for native ecological adept design might not be the sole reasons to go here. The food is good, well researched and prepared well, plus it's VERY affordable than those fancy restaurants in malls. One thing I could convince you with is their authenticity, it's hard enough to find a survivor for arts in this modern time and they are thriving, they have set the bar quite well in Davao dining with a native flare, it is an amazing night with good people who care for what they do.

Go make this your next dining destination when you're here in Davao. Easy to find in Waze and Grab, plus it's right beside Yellow Fin which is also popular among locals. Try it out for size.