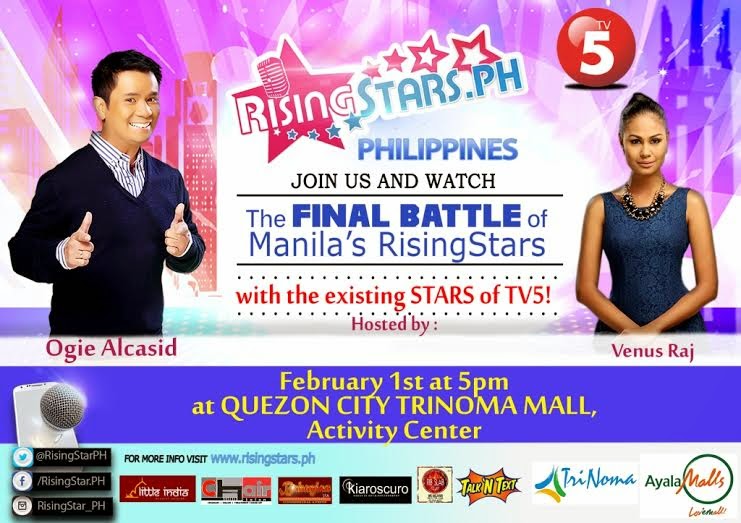 If you're not doing anything this Sunday, February 1 at 5PM, please do take the time to watch the biggest Singing competition in this side of the world - Rising Stars Philippines. This will happen in Trinoma Mall's Activity Center. The top 50 singers from recent auditions in Quezon City were invited back last January 29 and were narrowed down to 16. It wasn't easy because they had to go through live interviews, and auditioning in front of a panel of judges. Today, February 1 will be the Final Battle for Manila's Rising Stars, and these hopefuls will vie for the final prize which I was informed to be the biggest ever yet in singing history, make sure though that the talent equals that first! They'll be picking 2 winners from this leg so they get the chance to be in the Grand Finals to be televised soon on TV5.

The Grand Finals will also be graced by TV5's brightest stars like Danica Sotto Pingris, Rr Enriquez, Jeck Maeirhofer, Lj Moreno-Alapag, the stars of Happy Wife Happy Life which talks about housewives of Philippine's most promising Basketball Stars. There's also Tuesday Vargas,  Wendell Ramos, Sophie Albert, Mark Neumann, Shaira Mae, Nicole Estrada, Chanel Morales, Malak So, Marvelous Manzano, Alberto Bruno who stars in the gag show "Tropa Mo Ko Nice Di Ba”. Gelli De Belen will be there, she hosts TV5's Solved Na Solved a talk show about money matters and legal problems. Not to mention the one and only Empoy who plays the twin brother of Derek Ramsay in top rating Mac And Chiz, I bet you can't wait to see them all in the flesh! You'll also love the program's hosts Ogie Alcasid and beauty queen Venus Raj who'll be the main hosts. I'll tell you later about how the picking goes because I'll be there as well!

What I like about it is that the audition process can be done via the booths they have in the major malls, the application which you can use at home, or just about any other computer that can access their website via http://www.risingstars.ph. To know more about their future auditions, please like their Facebook Page by searching RisingStars.PH and following them on Twitter at @RisingStarsasia. This is a production of RisigStars Inc., see you there!

For more information about their program:

http://www.Risingstars.ph
Posted by John Bueno at 7:36 AM