If you had the chance to date a GMA star during Valentines day, who would it be and why? What would you ask them? How would you feel if they were right in front of you? Well, we just got the answers to those questions when the GMA Social Media Team arranged these gorgeous hunks and ladies an intimate night with us bloggers. It was really fun to get to sit down and talk with them after all the shows they've done in the Kapuso network. I'd really want to get to know them behind these glamorous facade. Well okay, this isn't really a romantic date. We're starting with one of GMA's good looking guys Enzo Pineda. 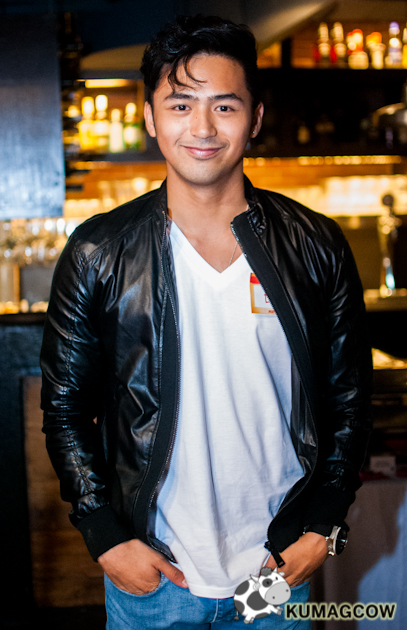 I've interviewed Enzo in the past and I can say he's a good friend. It was kind of easy to talk with him since he's very open and doesn't make a fuzz about him being a celebrity and all, he's really humble. 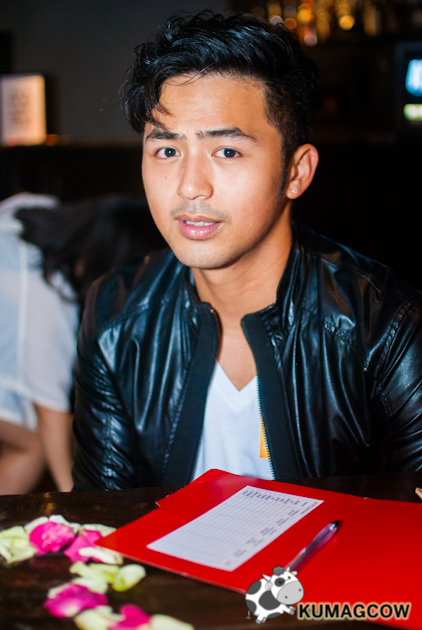 When I sat down with him, he was in character. He made me comfortable by getting Nate into the picture. It's his character in More Than Words which is ending this week. During this week, his character is going back to the picture and he'll be with Ikay again as he got drunk during some scenes. He'll be shocked about the change of Ikay and it's a very funny scene. He says "It's something hard and emotional for Nate. He's a type of guy who would give everything for Ikay. You've seen how his love developed for her and there's like a 180' turn into someone that's loving and caring, but still maintains that attractive bad boy look that everybody loves with his character. Nate is someone who has a hard exterior, but has a soft heart. I did have a phase when I was the bad guy but I like that. There's a transformation of the character and I like it because the viewers react on my character, it makes them think.

I do have movies that are coming up, definitely indie but it's more of an acting piece. I'll be going around the Philippines again so I have tons of regional shows starting next week, please don't forget also that I have another Bench campaign that will come out pretty soon. After More Than Words, I'll be training again for my first Triathlon, hopefully summer I'd be able to compete. I've done Aquathlons, a couple runs, I hope I'd be able to that in the next few months. I want to do that race on my birthday, I want a marathon, it's good that I keep myself very occupied when I'm taking a break from work. That feeling is good, it's that feeling of constantly achieving something. 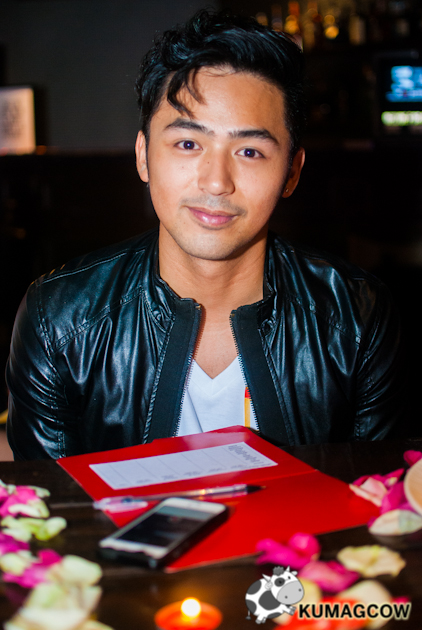 When asked about his girlfriend and how I see them so happy on Instagram, he says "Ever since, I've been very serious with girl friends. I like taking relationships seriously. I'm really happy and I'm so lucky to really have someone like her." now isn't he sweet?! Awww Nate, oh Enzo, you are awesome!

Next one's the beautiful Stephanie Sol. 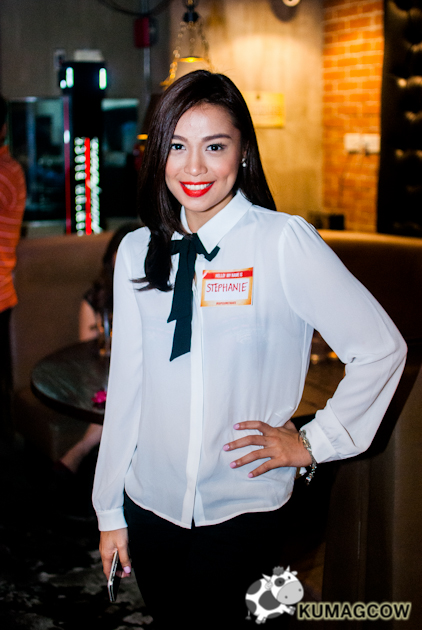 Steph is such a sweetheart. Whenever we meet on events, she never fails to say hi and acknowledge me when she can. She's also in several shows on GMA but when I asked about it, she was a little sepanx about it, of course it's More Than Words. "Last taping day was yesterday, so it was like two scenes for me. It was fast but it was very emotional. We had all the units together, we had the cast together, we prayed and said our good byes during the company call. It was a sad day for me, but I know all good things must come to an end. We do seldom meet but the production and cast is like family, we have dinner together, we watch films together, we even have a Viber group and we're very close. I don't know how we'll still keep in touch but I'm sure we're all going to have that in the back of our minds. We might have different schedules, so that's hard. They haven't told me yet what plans they have for me but after the show, I'll get their feedback and wait for meetings. I hope I did get to impress them with what I had to offer during this show. 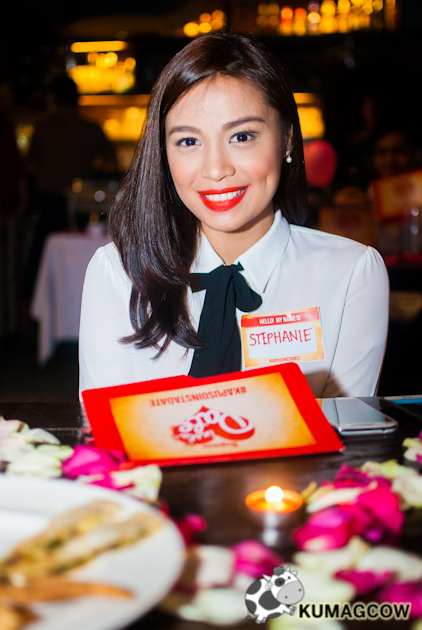 I'm co managed by Artist Center and Ms. Becky Aguila. We haven't really have spoken about it but she really takes care of me. She's very hands on, spot on because she watches us. I want Belle to be remembered in the show as "Rebellious for a Reason", and hope that with her in the show people would still appreciate her." Steph adds. For what it's worth, I think Steph is a diamond in the rough. She's a very promising actress and she's just starting. I hope GMA continues to give her more breaks especially this 2015. A change of character? Perhaps real soon, but for now we're happy about what she's doing. I hope she also finds a pairing with someone too.


Then we got to the table of Juancho Trivino. 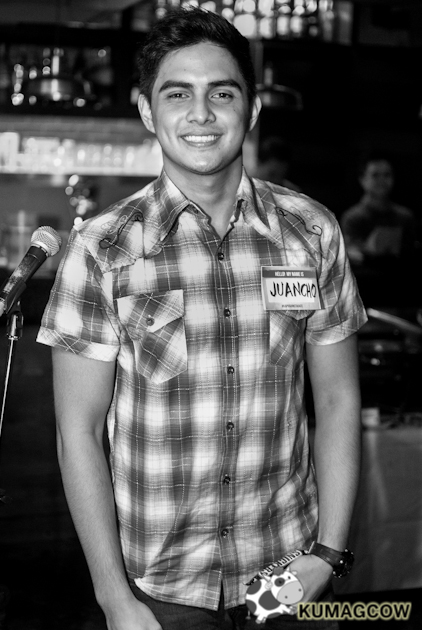 Ladies love him. I'm not surprised. Juancho Trivino is around 6'1, well built, a bit moreno and everything that a person who would categorize a perfect guy with "Tall, Dark, and Handsome". I bet underneath all that is a chiseled german physique and a soft heart somewhere. He's got a very positive demeanor but he could switch into a tough guy if he wanted to in seconds. That I think is what would make him a good actor. Am I too assuming? No, I don't think so. I just felt it that evening when I got to talk with him a little better. 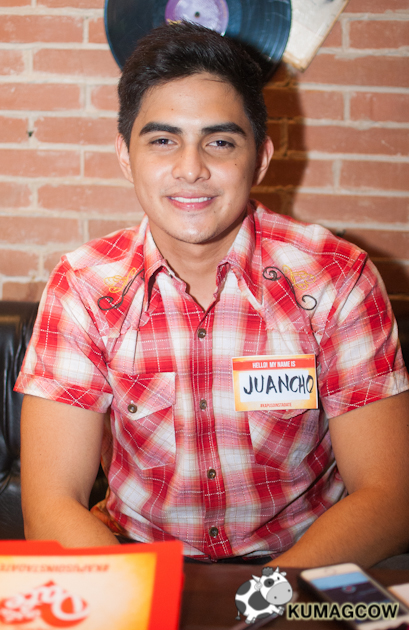 "I'm still in Bubble Gang, and yes I was surprised they let me sing in that show (I saw him in Istambay). The feedback was great but now, I'm going to do a new youth oriented show that will be called InstaDAD. It's going to show on Sundays and will be something like Teen Gen. I'm going to be here with Ashley (whom I'll be featuring in a little bit) and this is a new pairing. Ashley is really nice, we've got so many things in common and I find her really really pretty. We've known each other even before the show. I didn't hesitate accepting this show, I'll be here with Gabbi Eigenmann and he'll be the Dad of three girls. In the social media age, this show will be part of that enlightenment of reality. It'll be like a modern day Dad. I want to be an example on this show, that even if I'd end up doing something really bad in the show, I'll be showing how to be a good son, a good brother too. It's going to start with Ashley and me having a relationship. So people really should watch out how things happen, as I'm really excited about it!" he says.


Then we got to talk to Ashley Ortega. 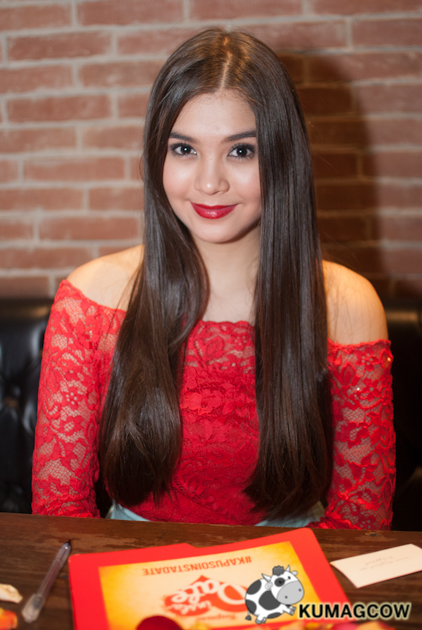 Well this is officially the first time I'm seeing Ashley Ortega. I thought I've seen her before but I realized just now that it was only for a former series Dormitoryo. She was with other GMA stars and I learned that night that this is their first official pairing. 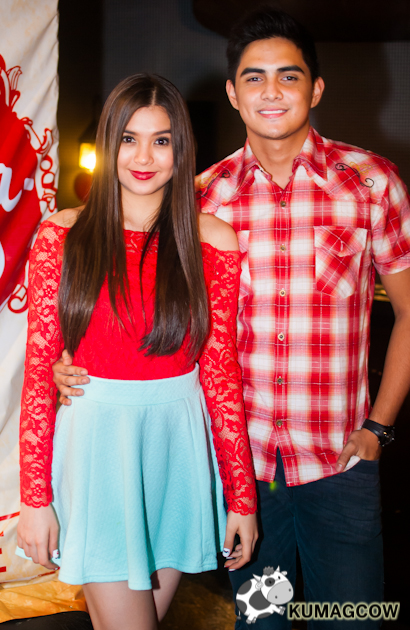 I got her to introduce herself so we get on to what they're doing. At first glance, I thought she was a bit older but heck I was surprised that this girl, is only 16 years old! "I started showbiz 2 years ago. I started in Philippine Fashion Week and that's where they basically discovered me. I was younger back then and walked for SM Kids two years ago. I wore clothes for tweens, auditioned and got in regularly through that. I'm currently managed by ICONS, Bebong Munoz and Artist Center. Right now, I'm in KBNTAM or "Kailan Ba Naging Tama ang Mali" playing the sister of Max. I didn't know it was going to be this big and felt it was only going to be on the sidelines, but when I read the script, I had so many lines and so much exposure, which was nice! So I'm so happy.

Then I got to InstaDad also, which is a youth oriented show. There's a lot of twists here and there plus they got us to play something like rich kids (that you may consider a little spoiled!) of Beverly Hills. We have tons of hashtags in regular conversations so it's really going to be fun, and a lot of people would really be able to relate especially the teens. We even have our own instagram where we're going to post actual things we're doing in the show. There are nerds, jocks, different kinds of personalities. Our Dad here is Gabbi Eigenmann and with the three sisters, three different personalities, I'm little Ms. Perfect but one day I'll get pregnant, so that's where the story is going to start. That's also the place where Juancho will come in. I haven't really worked with Juancho yet but I've been able to go with him in workshops. He's a very nice guy, good looking. If you're asking if I'd like somebody like Juancho, like more than friends, (pwede naman she says) yes of course because the guy is very kind and he's very well educated too." then I wished to see more of her in other shows in the same channel of course. She's very pretty and I think I like her! If Juancho and Ashley become something else soon, they would really look good.

For Part 2 of our series (Ken Alfonso, Janine Gutierrez and Elmo Magalona), just swipe right for the next story on your phones or click on this link!

http://gmanetwork.com/artistcenter
Posted by John Bueno at 2:12 AM