Gilas Road to Glory: Philippines VS Iran on TV5 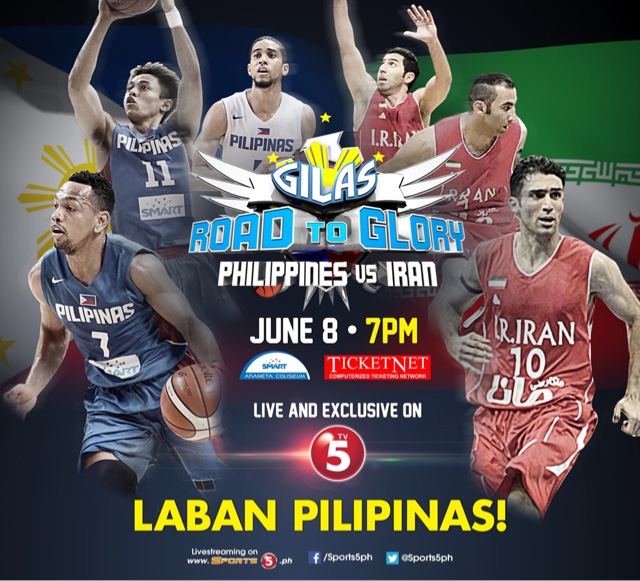 It's a tall order, but someone's got to do it. This June 8 at 7pm, be one with the whole nation as team Gilas Pilipinas battles it out with team Iran in our road to glory for the FIBA Olympic Qualifying Tournament. Getting this goal would eventually secure us with a slot to the Rio Olympics. They're already doing the legwork now as most of our Gilas players and Andre Blache undergo strict world class training under Coach Baldwin who made us take those necessary steps to become one of the strongest teams in Asia!

Road To Glory will officially happen on Junr 8 at the Smart Araneta Coliseum and will be televised live on the happiest network in the country TV5. We're one of the few teams that are up to be able to beat Iran as it was earlier proven possible in the FIBA Asia Championships. That close game, was certainly not the story they were actually expecting because in a nutshell, IRAN has ranked higher in the world and has been consistently playing in the Olympics for quite some time. If we've been able to give them a scary Finals round even if we're not in our own turf, that's going to be another story this time around. The Olympic Qualifying Tournaments will be happening in our own land, which means Gilas Pilipinas will have one more advantage, the Filipino people and the heart of a country that's stronger because it all happens right here in our turf. It gives the Philippines no space to prove itself, but a moment to be proud, be the 6th man and conquer even BIGGER opponents that we have ever met to get to Brazil.

There will also be tune up games versus Turkey come July 1 at the Mall of Asia Arena. Turkey along with other countries like Canada, Senegal, France and New Zealand will be here for the games abd we'll be expecting more world class games happening in the next few weeks. You should get tickets now through Ticketnet 911-5555 or their website www.ticketnet.com.ph. Never miss the action on TV5 and sports5.ph because it is all going to be there. Bring your heart to these games!