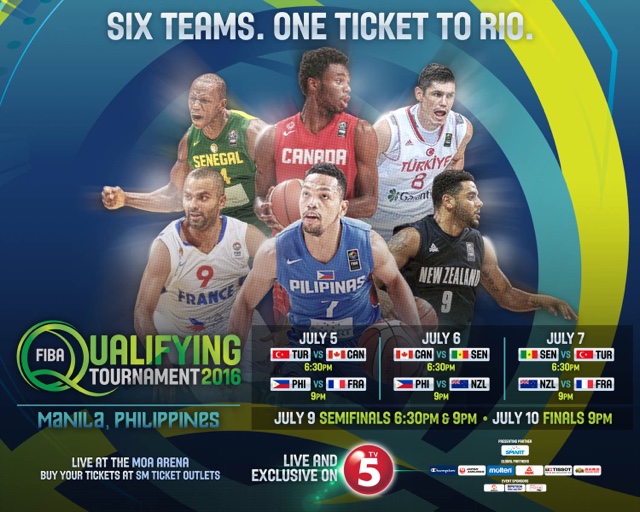 This is it! I can't wait! We've already won the rights to host the FIBA Olympi Qualifying Tournament this 2016 and we're raring to go where no Filipino has gone before (well we did in 1936 and the years thereafter) but it's been a while since we've actually had a basketball team on the world map. We've done the legwork, we've conquered huge teams and placed 1st Runner Up in FIBA Asia Qualifiers. We've beaten world ranked countries and taken Gilas Pilipinas out there, impressing even the best people in the industry... and this is our chance to bring back that glory we've been longing for.

They've already announced the final 12 players, and we've seen the exhibition games happen in other countries. As they all come home and be joined by the rest of the country, Gilas Pilipinas will attempt to win that single slot and overcome a lot of other countries to make it there. 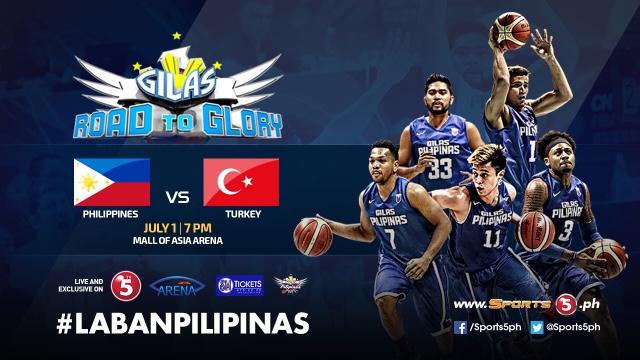 Our first touch of eurasian country Turkey will happen on July 1 at 7PM. This is just a tune up game yet a great venue to gauge how we'll fare with other countries when it comes to the real thing on July 5-10, 2016. The other qualifiers will happen in cities like Turin, Italy and Belgrade, Serbia. The Philippines will be pit against France, New Zealand and whoever is going to rank top in those dates. Games will be at the Mall of Asia Arena in Pasay City and it will be shown live on the happiest network in the country, TV5 with updates from Sports 5 PH too.

Gilas Pilipinas' Final 12 is composed of Jayson Castro, Ranidel de Ocampo, Troy Rosario, Ryan Reyes, Gabe Norwood Jeff Chan, June Mar Fajardo, Marc Pingris, Japeth Aguilar, Terrence Romeo, Andray Blatche and Bobby Ray Parks Jr. Unfortunately L.A. Tenorio and Calvin Abueva are out. This was announced by Tab Baldwin before their tune up game with China in Italy. The coach was adamant declaring it was because of numbers that they decided to choose the roster but I'm sure they were NOT short of HEART. Make sure you'll be there and purchase tickets at SM Tickets (https://smtickets.com/). Ticket prices go as much as Php 14,945 for VIP, Php 12,810 for Patron, Php 10,675 for Lower Box, Php 430 for Upper Box and Php 215 for General Admission (as seen on site).


Bring your hearts, let's all cheer behind Gilas Pilipinas and say "Laban Pilipinas! Puso!" (Fight Philippines! With all your heart!).