I super love Bavarian filled donuts. I don't know how my affinity with it started but I know how much I always want to have whole FunPasalubong Box to bring along to my friends when I go out of town. I love the Mister Donut Bavarian filled donuts because they put enough of it in every piece. Don't you just feel cheated when all you need is a decent doughnut and the one you get is half filled? Or worse, not even enough to say that you get your money's worth. Mister Donut has already impressed me with their lovely brewed coffee. When they came out with Bavarian flavored doughnuts, they even doubled the filling with "Bavarian Doubles". The line made us love Bavarian all over again as they combine 2 of your favorite flavors in one doughnut. The difference? You don't get that unhealthy intense sweetness, they do it just right.

Now think of some of your favorite desserts. This summer, I've always wanted to go to Guimaras and swim in the plaza where they held the Mango Festival. They served unlimited sweet golden mangoes which I absolutely love! Aside from that, I've been so addicted to the pastillas in Bulacan which they intricately (and artfully) decorate the wrappers too. Since Mister Donut is smart, they want these two elements to be in your favorite Bavarian line. They combined the two fillings and dubbed thee as "Mangostillas"! 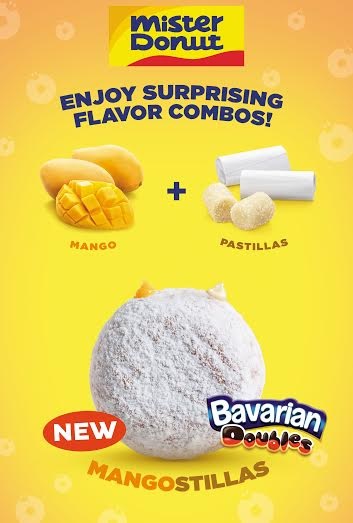 Now you can have two amazing flavors in one Bavarian doughnut. The Bavarian Doubles line also now is paving the way for other combinations  like the "Chocoyema" which combines rich thick Choco Fudge and the lovely milky favorite "Yema". Aside from these surprising revelations, they also went ahead with the same Choco Fudge Bavarian filling with the original Bavarian variety. They call this the "Chocovarian" which is still as creamy as ever with lovely chocolate swirls when you bite into it. You should really see the commercial. Albeit a little crazy, the twins would actually make you smile from ear to ear.

The new flavors won't disappoint you because they won't give you much of a problem on how they made it in the first place. You won't be complaining about the filling as they've got a sufficient amount of it in every piece, unlike the others who just put less of it, quality assurance would be crying haha!

Yes, the  Bavarian Doubles is available now on all Mister Donut branches and I'm actually going to their branch near my place to have these lovely donuts for me, my family, some of my friends who have been good to me. The other bad friends can go ahead and enjoy their substandard half filled doughnuts, I don't mind LOL!