Build Your Own Smart Postpaid Plans Starting at 399 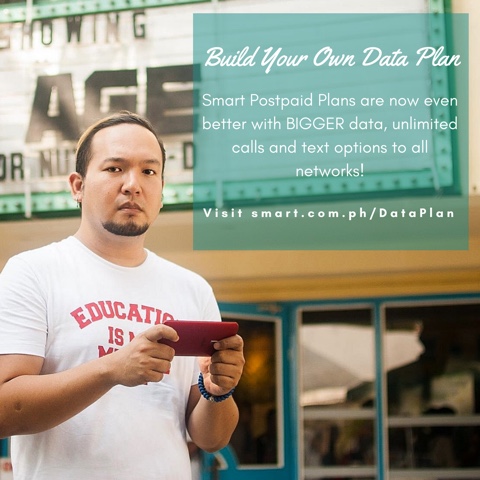 How much data do you use when you're binging so much during that rainy afternoon on K Dramas, iFlix, Youtube and Fox+? How much data do you think I use streaming videos with the events, or UAAP matches that I cover each day? To give you a ballpark figure, it's a LOT!

It's pretty evident that if I were not in the right plan, I wouldn't be able to cover your favorite stars, or play games and watch my favorite shows streamed. Smart wants to address this especially for those who are considering a bigger data allocation because the biggest network in the country is coming out with even better pospaid plans which you can build on your own. For starters, anyone can literally upgrade with a line only plan by just presenting their valid ID.

Plan 399 also has 3GB of data, then Plan 599 has 5GB of data, Plan 799 has 8GB of data, Plan 999 at 10GB, Plan 1499 at 18GB (which I probably will get), Plan 1999 at 24GB of data, Plan 2499 at 30GB of data and Plan 2999 at 36GB of data, all of which have improved data allowances than what Smart previously offered. This wpuld definitely get you the needed stretch you need to binge watch and upload media no matter what social media channel that is. That's BIG data allowance for the usual charges, which means YOU save a lot in the end. These new SMART postpaid plans are also FLEXIBLE because you won't get locked up with a device in limited set of services. You can even have your monthly cash out be added to your postpaid bill. You have total control of your mobile lifestyle.

Isn't that the SMART choice?