Interview With The Cast of MATILDA The Musical 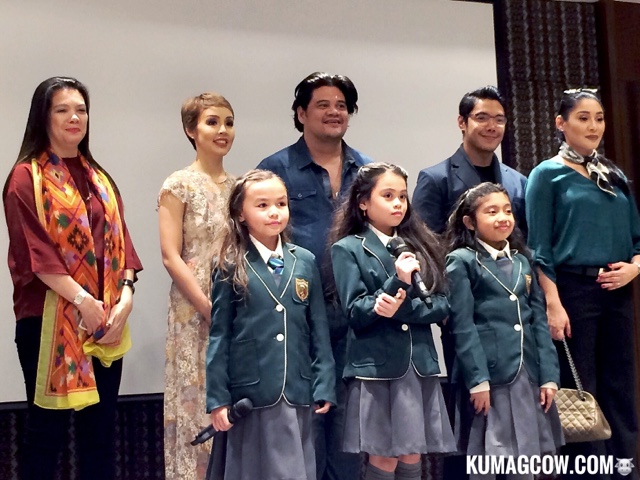 I am so happy that Roald Dahl's MATILDA The Musical is having it's Manila staging at the Meralco Theater this November 10. We've got very talented kids and I'm sure it was a breeze to actually see talent in the country fit for a Broadway musical. I love the movie so much that up to this day I still look forward to the HBO reruns for the movie version. It would be quite interesting to see how they would be able to translate that and tell the story through music.

This book by Dennis Kelly has gone and taught a lot of kids around the world about being good, about hope, friendship and love and for sure Tim Minchin already proved how his music and lyrics would encompass age as this will also be entertaining for adults. It will run from November 10 to December 10 and if you haven't planned anything to do this Christmas, wouldn't it be a good thing to have an early gift for a change? 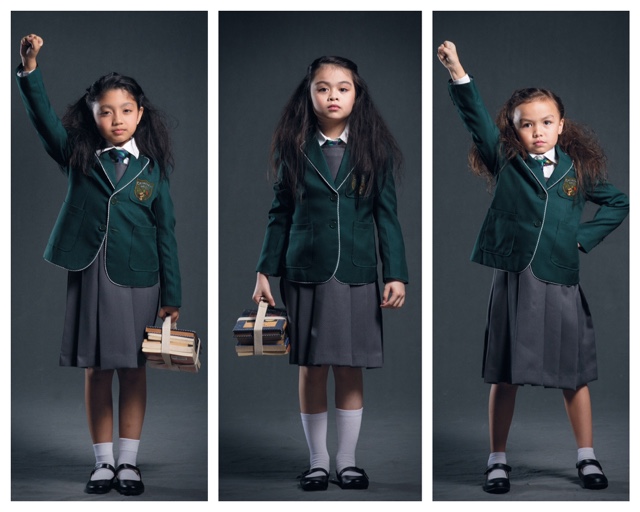 Esang, Uma and Kyle will be alternating in Matilda's role. The kids uttered:


"Yes actually I've watched the broadway musical, this is a dream role for me. It teaches us to never give up if we have our dreams!"

"I've watched the movie and also adore the book. I am dreaming because this just feels surreal for us. Even if you're little you can do a lot. I have always wished to become someone like Lea Salonga."

"If you want something, you can do it and never give up!"


It's one of the most exciting musicals this year and Atlantis Theatrical Productions have done a really great job choosing the kids and the rest of the cast. We talked to them right after a short press conference at Marco Polo this evening. 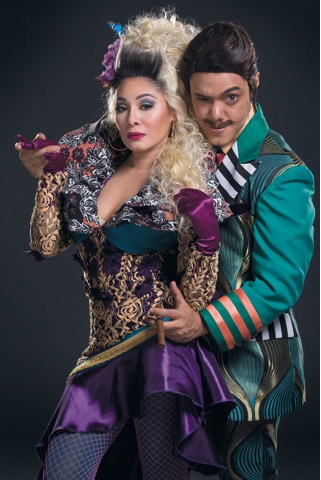 We sat down with Joaquin Valdez who's playing the character of Harry Wormwood who is the father of Matilda. He says "It was a character that was completely out of our personal image so in a way it's a bit difficult. I play an escapologist, Matilda likes books and I go between that and a fantasy story, like a dual role of a slimy abusive father and that perfect one she wishes for. It's an interesting take because it's not done in the broadway version, a personal touch of Direk Bobby. Matilda can move things, because her mind is that strong. He sent me a message a couple of months back and this was really a stretch, I just jumped in. People who know me were really surprised.

This is the first time I'm playing this  character and I think it's a test, it's a nice dynamic. We get to discover a lot of new things especially with the kids. I started out in theater when I was 11 and when puberty hit, I couldn't play roles. I signed up with a pop vocal group, I studied film making, but I still go back to theater. Until recently I made a decision to do this full time. I went into advertising, but this was really something that I looked for. You'll really go back to theater. I am more comfortable with English, it's nice to do an original but my training has been really there." 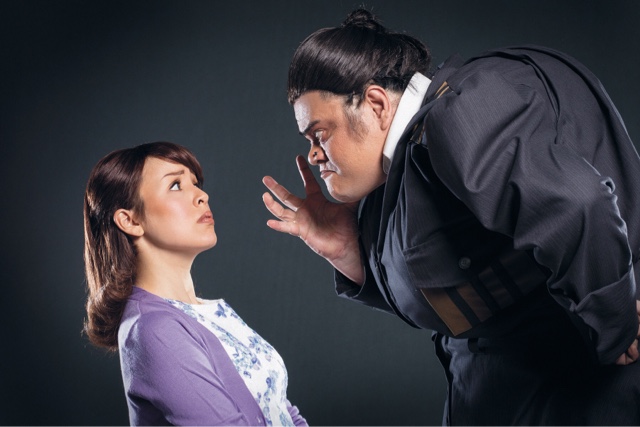 Jamie Wilson (whom  I loved in Kinky Boots by the way) plays Agatha Trunchbull the evil head mistress. In broadway and west end, they require to actually have the man play the part because of the physical requirements they have to have like throwing kids and stuff around. He says "I play the principal of the school, the antagonist, I get to scream at kids, provide horror. It's a female character which initially I didn't know was actually commonly played by men in different stagings. I'm going to be in an outfit. It may have been played by a female one in the movie but there's a lot of magic on stage that happens, she's an olympic hammer throw champion. I was shocked initially because they made me learn Ms. Trunchbull's part. I may or may not have a harness, but there's a lot of theater tricks because it's really exciting. It's a matter of building trust, of safety, of guidance, even if it's repetitive, it's a nice opportunity for professionals. They're like midgets, like adults in small bodies.

My whole family has been in theater, and I have been doing this for 37 years. My father is Johnny Wilson but he discouraged us, I was one of the first MTV VJ's, even before Donita Rose. I did a few movies, but the process of theater was just so good. I was really bit by the theater bug. We had 2 months of rehearsals, you've seen Atlantis do productions and they invest in this heavily because they have international standards. Theater has been here quite long, but it never became as big as this. Now you have shows every week, people can choose, from Shakespear, to activist shows. Internet made it easy to market everything. They are attracted to something live, to sing big songs, the risks, the tensions and it's not practiced. So you'll see a lot of that in this project."

Mrs. Zinnia Wormwood is played by Carla Guevara Laforteza, a star magic artist. She says "She's a neglectful mother, always with her DI and only wanted money from her husband. She had hate for Matilda, but these kids are so much of my babies. These children, they are like the future of international theater but they are such naturals. They can teach get the international actresses a run for their money. I'm not a dancer but I had to study for this one. I have three children at home, but here it's a gazillion. They run crazy, but I always go early so I can prepare myself. I have been in the industry for about 25 years. I've worked with children before but not this many. I did Hansel and Gretel, I played a Nun, but this was a real mother to child thing.

They are very disciplined when they passed the auditions, they briefed them and had child wranglers while we are at work. They are kept busy, sometimes have too much fun but they are controlled. I watched the movie, I watch adaptations but I watch it because I want to make sure I don't duplicate them and just bring out a personality that is natural or similar to me so I can play it like my own interpretation. If you watch it here, it's got more heart. It's not mechanical, that's the difference. It has more heart and that's what make it special. In this one, it's going to be a woman that doesn't care what her husband does, but I'll try to be more lovable. That's what I was trying to do in this case." 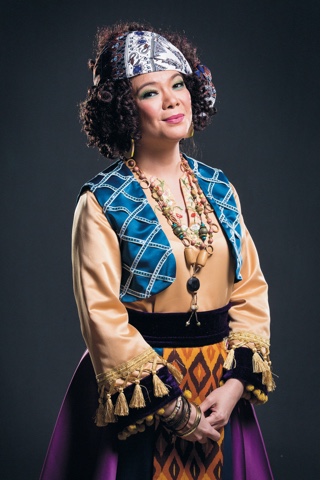 Ms. Emeline Celis Guinid plays Ms. Phelps the librarian. She's on one of the most pivotal scenes because she's the librarian who's going to make Matilda's mind soar high. She says "This musical is much like a gold mine, if you see the kids perform, dance, even if I don't have songs I have to interact with her storytelling. I have to listen to it all. Esang can pick up lines easily, I think that's what is good with the kids because they can absorb fast. They might be three kids, but they have their own strengths and they really tell the story legibly. You naturally just pay attention. I did one day of audition for this and waited for their call. This is a great experience all in all!" 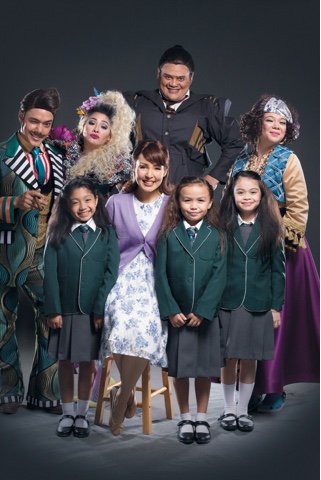 The soft spoken and pushover Ms. Honey will be played by Cris Villonco. She utters "Oh my god, having 20 kids around, I'm not really used to that. It's a lot of fun watching them focus, and enjoy the music and choreography like it's not work for them. They sang the songs with so much gusto, so much energy. They knew what exactly what to do, even know the script better than me at times. They were singing, I was crying at times because in my time it wasn't like this. Their parents must be really proud. It was hard to keep them quiet at times, but man, they get all the choreography without dumbing it down. They had 4 hours to do it and it wasn't a challenge for them at all. You'll see the songs come alive, I hope even in Meralco you get to see their heart in the show. I think the adults learned more from them, we get to teach them accents but they know their music and lines. I come in one day and they even know OUR parts. They are good, even if they are tired from school takes discipline to do a show. Their grades are monitored too, I applaud the parents for trusting the handlers because these kids are so good.

This play isn't about us, it's about them. Every child is different, they could learn a thing or two about them not being alone. It was Matilda who pushes Ms. Honey to have more courage. Kids handle bullies, adults handle bullies, all in live theater. Whether mistakes are made, you'll love the magic and I hope children see this in schools. I hope they enjoy it as much as we do. I auditioned when I was 9 for Les Miserables, but I wasn't as talented as compared to these children. It's simply overwhelming seeing them dance, sing and you wonder where it comes from. They do it with love. I guess the exposure to different talent shows, to Youtube, they're learning a lot and knowing there are talented kids around the world too. The Philippines should be recognize as a hub for talent. There's no talk about that yet in putting them in international staging, but some of the boys in the cast are already part of Lion King. My character is more pushed around in this show, some little stunts will happen. Let's see when we do technical rehearsals because we are moving there on Sunday for the first time. It will be magical, I promise you that!"

Oh and for a great parting shot, let me share with you this performance earlier. If you're impressed, remember to buy a ticket eh?

Again, MATILDA The Musical will start on November 10 until December 10, 2017. If you're interested in making your kids watch the show, make sure they are around 7 and up as we don't want to make kids bother other theater watchers okay? It's a great way to bond with your family over a great story, great songs and show. You may purchase tickets at Ticketworld.com.ph or call 8919999. I'm watching too, hopefully on the actual opening date!