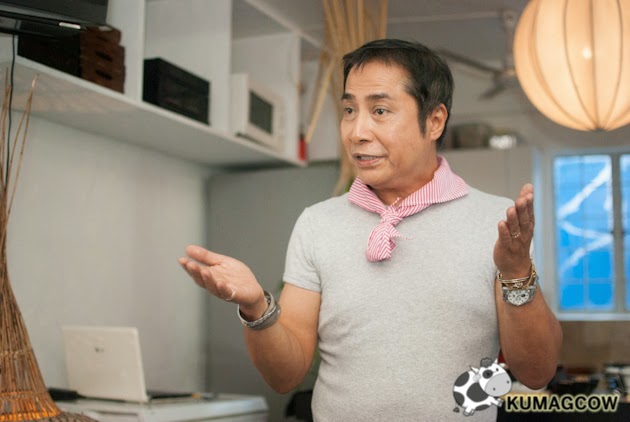 Food is something that is non negotiable. When you're busy dreaming, you think of it 80% of the time. We Filipinos are becoming adventurous now that we've got access to more ingredients either from the Southeast Asian Region or beyond. We were fortunate enough to take some of these in at the Second Floor of the Caballete Artist's Gallery. The cafe and restaurant called Comida Chefs Gallery Cafe turned up to be quite an adventurous little place - perfectly fit to take right after the artistic dose you'll get on the art gallery on the first floor. We were welcomed by Chef Danny Dela Costa who also had an old restaurant called Comida Ilocandia in Timog Avenue. Spurred by his love of Ilocano and the fusion with new world dishes, he takes us to gustatory trips around the world then spins it with the ones in the northern region. I already had the great fresh salads he made during the launch of the Caballete Art Gallery and it was really good, bordering on even fancy. 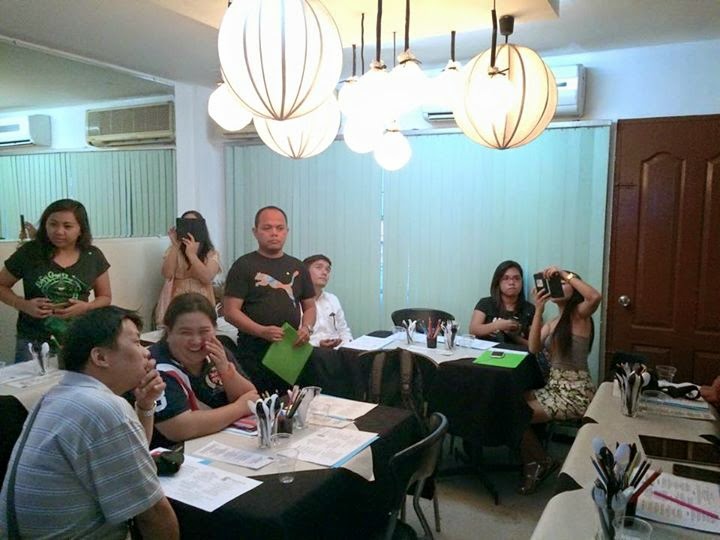 The place could probably fit 20 people, but it was already packed for around a little less than that. Often times, it's gonna be few since foot traffic and audiences from the gallery only account much of this restaurants clientele. It's a bit inviting, to grab a book and study, have a business meeting or perhaps just be with intimate friends and family. Smaller groups would love it, more so the food! 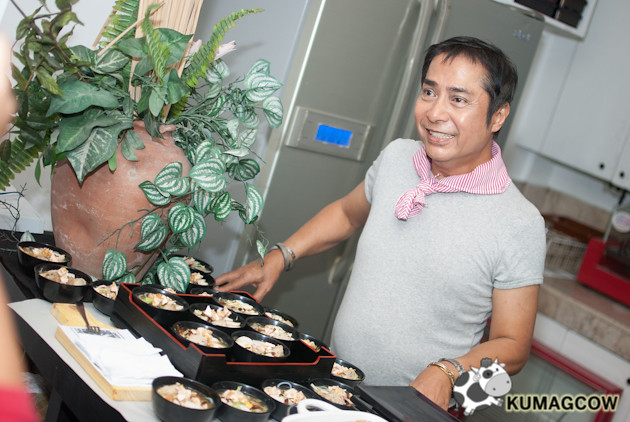 "We have full support to the business we developed. I have been a designer for 45 years and been traveling all over the world. I've been exporting to Japan, the US and Europe then. During my stay in Europe, I took up culinary courses in London as I won competitions with Magnolia Cookfest organized by San Miguel. I won the chance to do so. I fell in love with a guy and opened up a restaurant that served Nonya and Filipino cuisine. I went back here and taught classes with Ms. Heny Sison, cooking started that way. After 4 years, I won a competition in Japan and got to New York for 4 years. I already have a course from UP AB Speech and Drama. Back then I felt that I was already an artist but really, really multi faceted. Although, I still believe I belong to one, that is fashion design. Cooking and making apparel for me felt quite the same. We've been in the business for about 3 years now, we've done mostly regional cooking with my cousins and college friends. Unfortunately 2 of our members passed away and some got involved in politics. We met one day and talked to him, the trend now is a gallery and another business but since I wanted to do hawker food, I did it here. My staff has been with me for a long time, we are in the catering business and do personal chef services. We do TV productions, birthday parties, we can go to your kitchen, ransack your ref and serve everything. We do not use preservatives and now doing heritage food and use modern techniques. I do RTW corporate wear and image enhancement for  department stores here, but my love affair with food has always been there."

I super loved this one. This is sort of hawker food from Indonesia.It's Tangy Rice Stick Soup. It's got almost everything on it, much like a Vietnamese Pho, but the soup base is done with lemon grass hence the sour taste. If I would order something from this place, it would be this!

I think he mixed Chicken, Beef and Pork, formed it into a ball with spices and skewered it in on lemon grass sticks and char grilled to get that perfect smoky smell. It's like Asia meets Middle East so it's very meaty but infuses the herbs to get that distinct smell.


This is Chef Danny's spin on the old Pansit Loglog. He used pasta, Spaghetti in place of the usual rice based noodle in the original one. He calls this Spalog. It worked, and the mix of saltiness with the bland pasta was like putting art in a canvass. The hints of smoked fish, crunchy chicharon and some veggies make this a very nice complete meal. Make sure you also get the Pandan Lemon Grass Cooler to hose it down after the very pungent spices from the pasta.

The Philippines best are showcased here too. They have the Boracay famous Chori Burger and the Ilocano Longanisa. I wanted something meaty that afternoon and they got these made from scratch. They do not contain preservatives and is on the garlicky side. If you are looking for something that you miss in Ilocos, then visiting this place would probably bring you home. Pair this with rice and you're already there!


Chef says this is mostly an old Filipino Dessert called Latija Comida. It's mashed Banana layered with Cinnamon, milk and cream but it's not too sweet. I like it and would be perfect for people who don't want intensely sweet desserts or for those watching their weight since this is fruit based. The layers felt like crepes too. It's pretty good, something simple but pretty good!

Comida Chefs Gallery Cafe is on the second floor of Cagballete Artists Gallery located at 111-A Kamias Street Barangay Malaya 4 in Quezon City. It's perpendicular to Kasingkasing Street and is in front of a Shell Gasoline station, about 4 blocks away from Edsa. If you're looking for some peace and quiet, comfort food, in a very lovely setting that won't break the bank, then come visit Comida Chef's Gallery Cafe for lunch or dinner. They serve drinks too, all you need to do is ask!

For more information about their place:

http://www.Facebook.com/CaballeteArtistsGallery
Posted by John Bueno at 10:04 AM