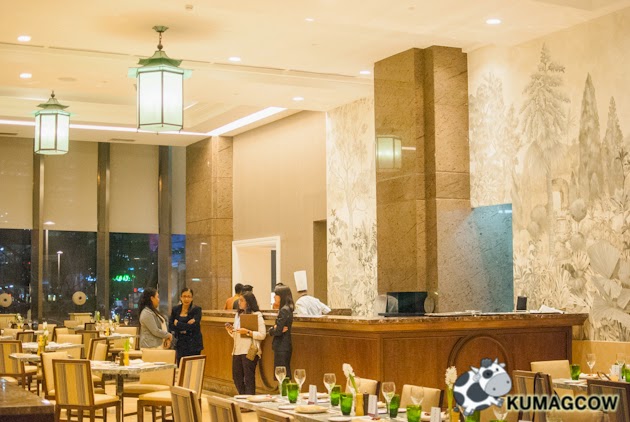 Situated at Ayala Avenue's first turn from Edsa, this is one of Discovery Leisure Company Inc.'s verdure properties called Discovery Primea Makati. It's currently on soft open status and has just opened one of the few planned restaurants in this majestic hotel. It's lobby alone got me in shock, and in awe with its mighty Chinois - Mediterranean architecture, high ceilings and grandiose murals. Judging from the waterscape, door and furniture positions, they've probably consulted Feng Shui experts to make this charming piece of land into a palatial superstructure. The restaurant is named Tapenade. 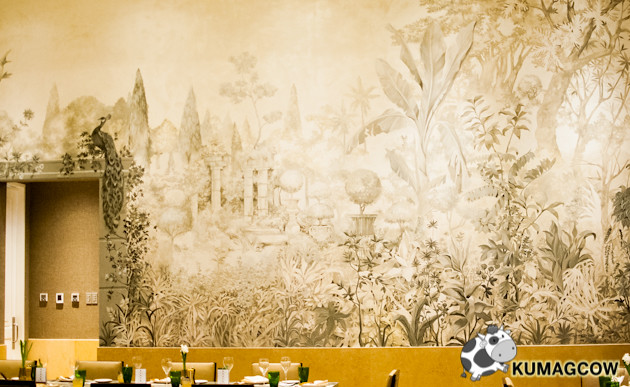 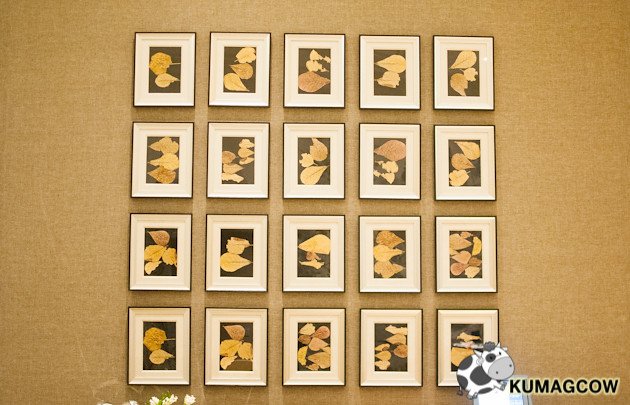 Dining in a place like this you might think would cost an arm... a leg... or a kidney... but I've seen the menu and to be honest, their dishes are reasonably priced. Compared to fancy shmancy restaurants in this area, they're priced even a bit lower and wouldn't even show much like hotel prices in the same district. 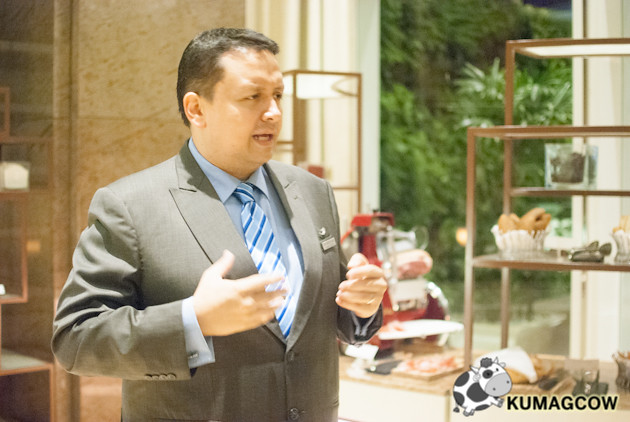 Discovery Primea's very own GM David Pardo de Ayala gave us a short tour of the Salad Room inside Tapenade's grounds. He says "We're offering something new, something unique to our restaurants and hotel. This was all planned, we had to go back to and from Singapore and scratch plans again to go back to square one. This design is what we think interprets what we have in our restaurant, a work in progress. Now we have modular sections over here, tables that can move easily so our Chefs and our staff can go in an out with ease.


We've got Prosciutto Di Parma that's waiting to be sliced, hand cranked the old fashioned way. Don't trust those deli slicers, that's not what we had grown up with when we were in Italy, I kid because I'm from Colombia. It's the perfect prosciutto slice, tempered, where the fat will sing in your mouth. We've also got Salumi, Cold Cuts, Spanish Chorizo, an assortment of cheeses, even local ones. We're proud to be a Filipino owned and operated company. I think I'm the only foreign guy here, but I've been here so long that I'm probably more pinoy that some of us here. We've got organic greens from Australia, France, Spain, Tagaytay, we all got the best from the globe. We have these containers over our greens, solely designed for us so it keeps everything fresh, it's the theory behind this. Aside from that, we have composed salads and use a lot of grains like bulgur or quinoa, to round up a very nice salad, some smoked chicken, some salmon, some ham.

We even got these oysters from New England here as an experiment, but these are the best oysters in the country, maybe even the world. They're grown in farms in Washington and gets shipped in Manila, meticulously scrubbed and passed into beams, internationally certified, so you get the best without worrying if this is fit for consumption. Our salad room has a selection of dressings, infused oils, the large leaves are from France, some are from Spain, also some organic sprouts that just arrived from France. Our chef's will just add this, some little snips on your salad. I wish I had this when I was a Chef, you'll be here to paint your canvass. This is just 650 pesos, you can make a perfect meal out of greens and little proteins. Enjoy this and take your time with a bottle of wine, champagne or iced tea, whatever you wish!"


It was the best thing to have after a long day in Makati. If you're looking for something worth your time, and money, Php650 for a salad buffet in a hotel setting this extravagant is really a steal! I loved everything on their cheese section and the Prosciutto di Parma was never frozen. You can smell Spain from a mile away! 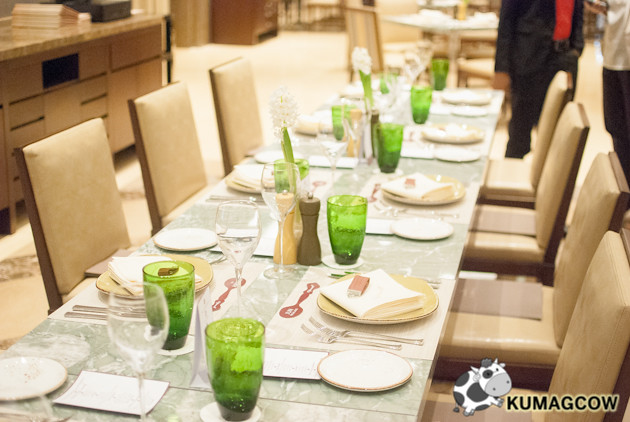 When dinner arrived, this awesome table was prepared for us with special marks on the personalization because they did everything with our name on it. 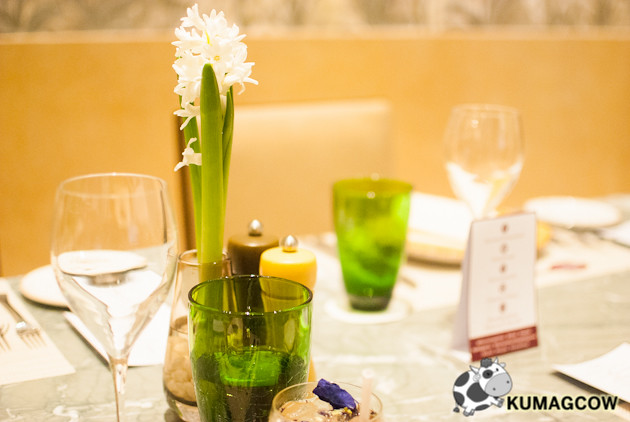 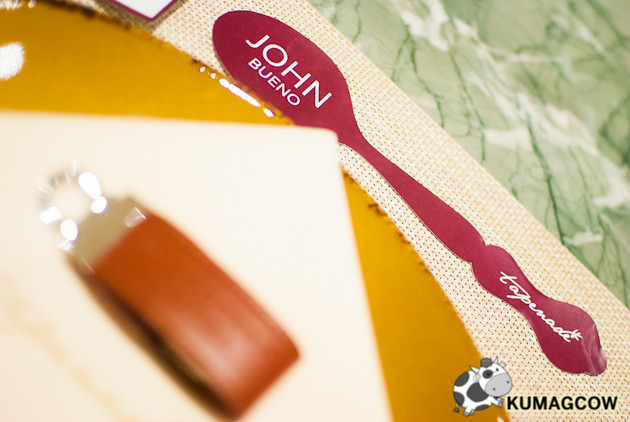 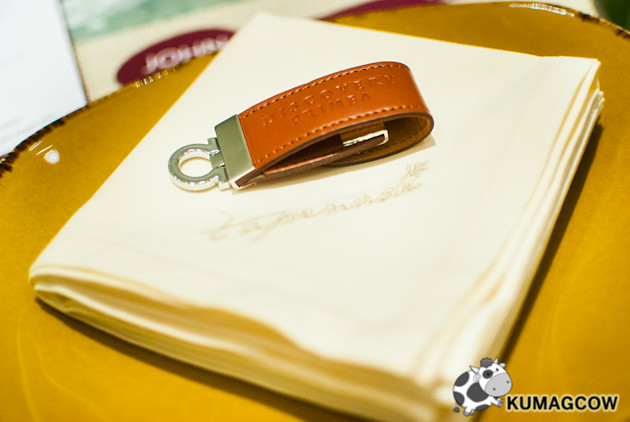 It was sweet, classy and expensive looking. Then we had our Appetizers. 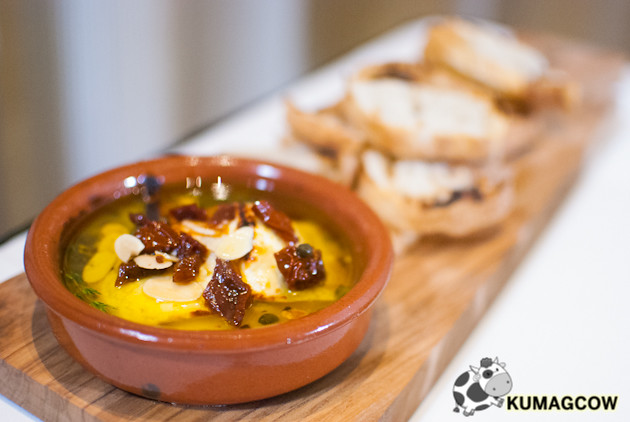 This one is the Stone Baked Feta Cheese. I think it's swimming in EVOO. Just think of chunks/blocks of Feta Cheese with aromatics, set inside the stone oven and blistered to perfection. They also had a side of toasty crusted bread right beside it so you can spread it on top and take a bite or two. This was awesome! 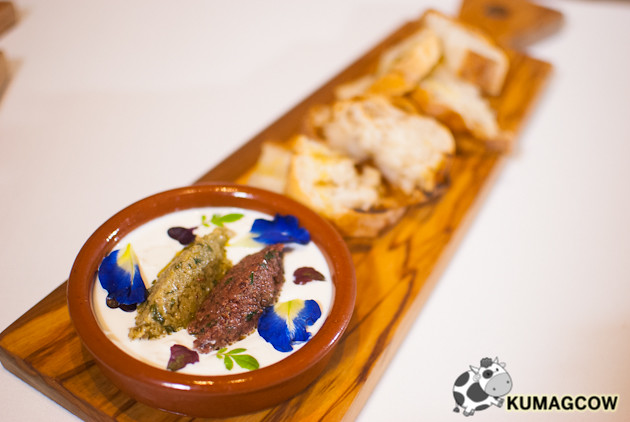 This is the one they call Whipped Italian Ricotta. The Tapenade is on the bowl and is mixed with the ricotta cheese, flower petals and spread on the same kind of bread as the one earlier. It's so addicting and creamy. We had this and the one served on the other table because we couldn't get our hands off of it! 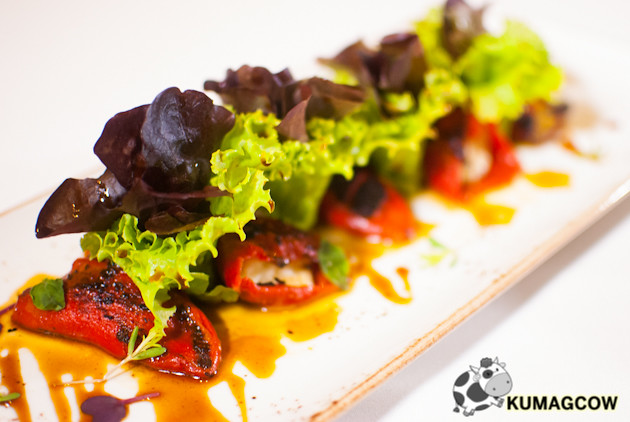 This one is the Stuffed Piquillo Peppers a la Plancha. Perhaps the chilis were blistered then used to wrap individual cheese bars and served with chili oil, and balsamic vinegar. It was a nice way to have something smoky and flavorful at the first salvo. Then some of their best sellers were served.

Shrimp goodness on a plate that merges Spanish, Italian and Greek influences in this plate called Greek Shrimp Rissoni. I love creamy Risotto but this concentrates the natural sweet flavor of this meat from the sea and it's combined with Feta cheese so you get a few bursts of saltiness in every spoonful. If I weren't really allergic to seafood I would have finished this plate myself. I saw some of the peeps in our table took seconds because they loved it, I'm not surprised. 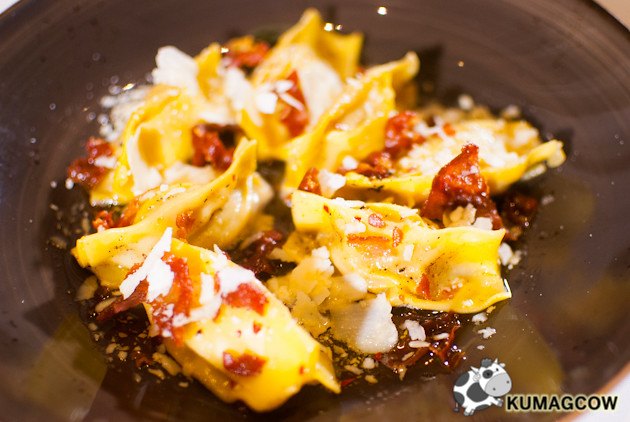 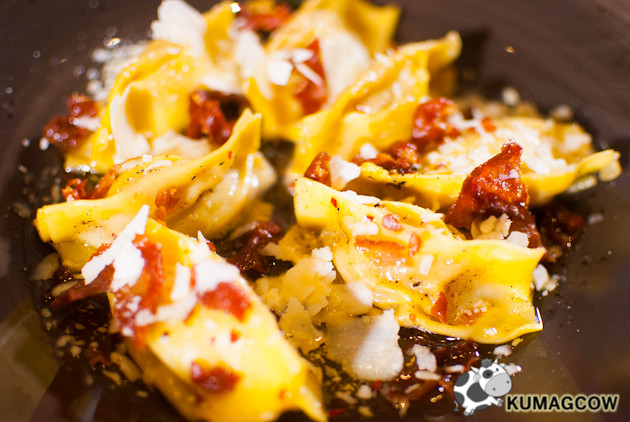 A lady across my table (Jamie Sugay, Discovery Primea's Director for Public Relations) described this as her own boyfriend. She describes how she loves this so much that it's the only thing she's eating the whole week. The Pumpkin Agnolotti is very rustic, soft pillowy pureed pumpkin enveloped in pasta much like a ravioli. It's got a different form, slightly thicker exterior, and the pumpkin tastes heavenly and a little nutty with the nutmeg and cinnamon content it probably has. It's covered in extra virgin olive oil and super crunchy bits of fried parma ham. Don't be impressed yet because they've got a lot of things up on their sleeves.

I have to admit, I haven't really explored the cheeses of Davao. It's been really in demand in the last few years and I've heard that they are not able to fully supply the local market. Even foreigners go to the city down under because they can't imagine how we're producing such world class worthy cheeses in such a humid weather. I super loved the mango cheese in the buffet earlier but this Davao Goat Cheese was just so good on Pizza. I thought it was going to be "just another pizza" but I was wrong, this darn thing was really good especially with the thick smoky bacon slices up top. It made sense and the savory flavor was perfect for the crusty pizza made in the stone oven at the center of Tapenade. I couldn't wait for more things from that oven!


I thought it was just another pizza but actually, it's really good. The cheesy exterior, the herbs alone would have already been perfect but they added a perfectly cooked egg on top once they take it out of the stone oven. I loved this Pizza Tartutafata. I had two slices of it!

For meat lovers like me, there's just no excuse to not be excited with this on a plate. They call this Porcini Crusted US Angus Rib-Eye Steak. Yes, they've got Porcini Mushrooms on it's exterior, seared and blackened on a pan, then set inside the oven for a few minutes, rested and served. This is my kind of comfort food and with the meaty love I got from this piece of meat, who needs a love life? Haha! 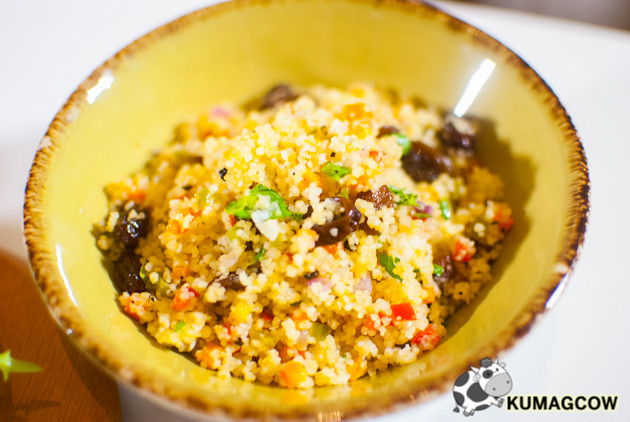 Named after the earthenware pot it's cooked in, this Moroccan based dish had every reason to be revealed at the last minute. It's spices were very present, the aroma filled the room, it was very comforting to have something almost curry flavored that evening. Pair it with couscous, and it's a done deal. It felt homey, it felt great to have something I personally love included on their menu. I love these spices and they did a good thing in interpreting it. I love this Chicken Tagine!

I don't like Lamb that much because of the gamey smell it has, but surprisingly it's not even present in this dish. Tapenade's Lamb Kebabs was so good. The basil olive pilaf and yoghurt sides was also good to pair with this piece of meat. It wasn't gamey at all and felt like beef to the bite. The difference is, they use premier quality lamb and that solves the mystery.


Something so simple but surprised me too was this Papas Canarias. With herbs, infused oils, over warm potato pieces, it's comforting and very filling. This is meant to be shared so if you want to skip rice, this is your best bet.

The Gianduja Cake was extremely chocolatey. The Turkish Baklava had us and a couple of guests ask if it was gay, but it was nutty and not too sweet. I loved the Bomboloni the most because it had that soft pillowy donut texture and loved the passion fruit cream under it that I wiped it off in an instant. The ice cream on the side was also the perfect contrast, something warm then something cold, so I loved that too!


They've got Fruit Sangrias too. Some are berry based and the other one is citrus based. I love the mix especially the citrus one because it tasted very fresh. Yes it can get you ladies a little tipsy but wouldn't it be a nice thing to have after office hours? Exactly.


The Moroccan Mint Tea would be perfect to end a date. It's minty, so if you've had garlicky or savory food earlier, this would really cleanse your palate and set you in a comforting mood. Doing other stuff would be great afterwards.


If you're a caffeine freak, make sure you have this Turkish Coffee. It's dark, a little bitter, and perfect to pair with the butter cookies. It's traditionally served in this cup and tray set, so you know you're getting the real thing.


Tapenade is just one of 7 restaurants planned to be put up in Discovery Primea Makati. If you're thinking of celebrating small events, birthdays and parties, this might just be the perfect place to do it. It's cozy, accessible and got all the great food you'll probably experience in Europe, the Middle East and Asia. Come and experience it in Tapenade, at the ground floor right wing of Discovery Primea at 6749 Ayala Avenue in Makati City. Call them at (02) 955 88 88 for reservations. I wouldn't recommend them if I didn't enjoy it!