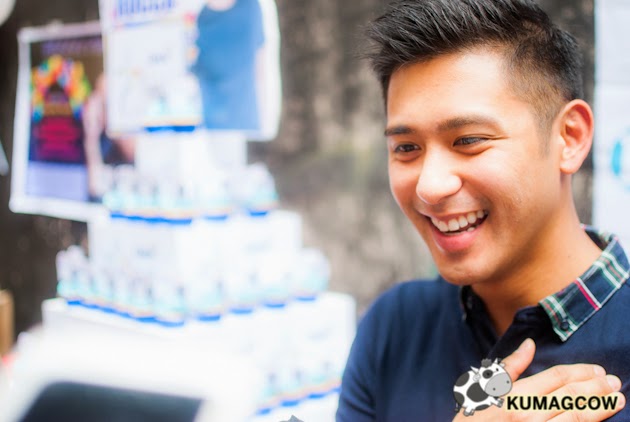 I always believed in this guy. He's one of the most genuine people I know in the entertainment industry. He's celebrating his birthday this month and he did it with a purpose. We went and visited a small non profit organization in Manila called Bahay Aruga. They take care and provide shelter for Cancer patients who live from faraway provinces and need to be in Manila so they can get the care that they need. Judging from the looks of it, Bahay Aruga is in dire straits. They were in a rough situation because they couldn't even get the funds to pay for their electric bills. They also have problems with food supplies because they couldn't get enough of it with the donations they get from people. It's tough and the situation with the patients are not that good either. This cause is very close to Rocco's heart because his own Mom is a cancer survivor. They've dealt with this in the past and you feel they understand the patients as much because they've been through it. 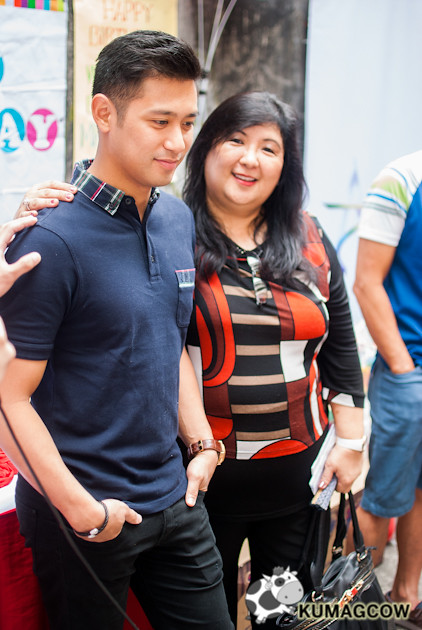 Proud Mommy Linda has nothing but good words with her son Rocco. He's been a very good example to the youth and does a lot of things and charities which he doesn't publicize because he secretly does these things in the past. This time, he really thought that Bahay Aruga could really get at least publicized so a lot more people could get the help they needed because they really need more sponsors. 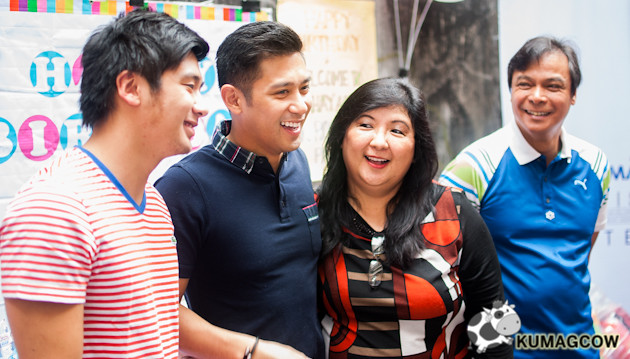 This also is much like a family affair because his equally good looking younger brother Kyle and Dad Ralph was also there to join them. Kyle even joined Rocco in one of the dance numbers because they really felt they had to at least give these kids, their families and guardians something to be happy about during Rocco's birthday. Kyle was a really good sport too.

Here's a short video of Rocco's arrival, that dance number and a short interview with him. 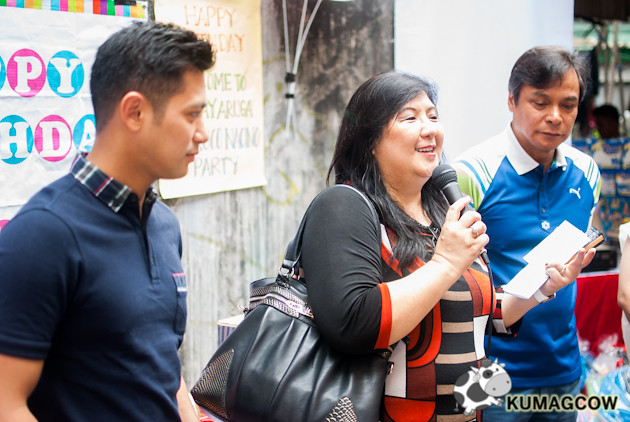 Mommy Linda was also very happy that a lot of people showed interest in helping them help the shelter by bringing in presents for the kids, school supplies, food and even money to purchase medicines for them. The family, some of their friends, Mommy Linda's alumni friends from abroad, their family and the Roccofellas contributed what they can so they can help Bahay Aruga and the patients there. She also shared her experience and continued to encourage the kids not to lose hope because they too will get better and survive this ordeal. Mom Linda went through the same things these kids are going through. It was the opportune time to make them realize it was possible with God's grace! 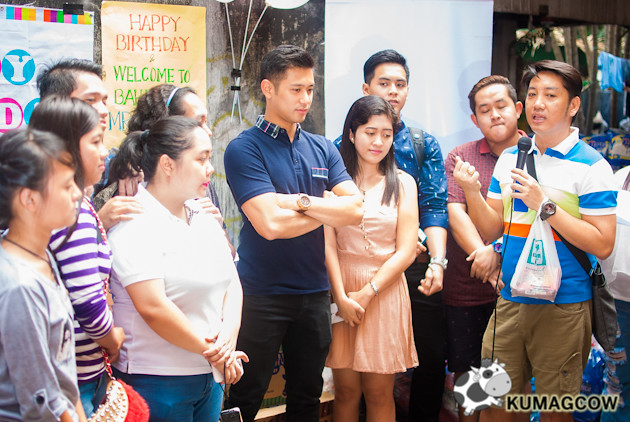 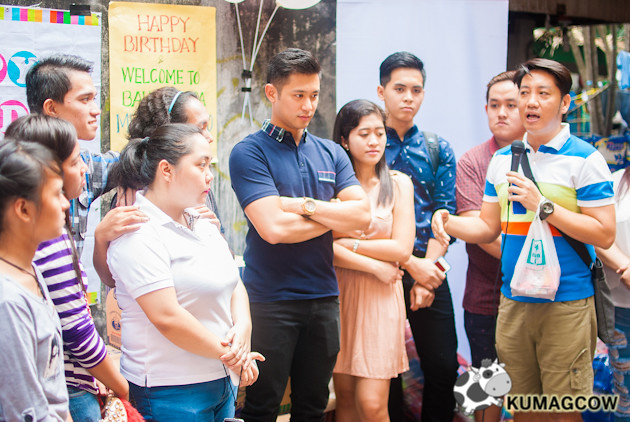 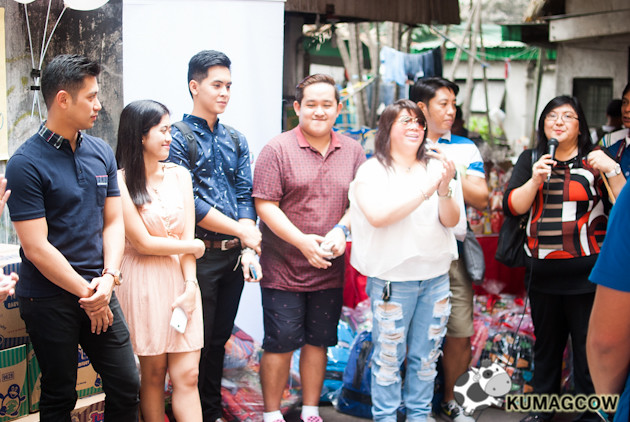 The Roccofellas are not like fans for Rocco, to him they're his friends who have sternly supported them all these years. There are professionals, students, teens who have always been there for the charitable work he's done in the past. They also helped a lot in preparing this event together with the folks from GMA Artist Center. They also gave a speech to thank Rocco and his family for giving them the chance to help them during this celebration. They also promised to help in the future ones in support of their man, Rocco Nacino. 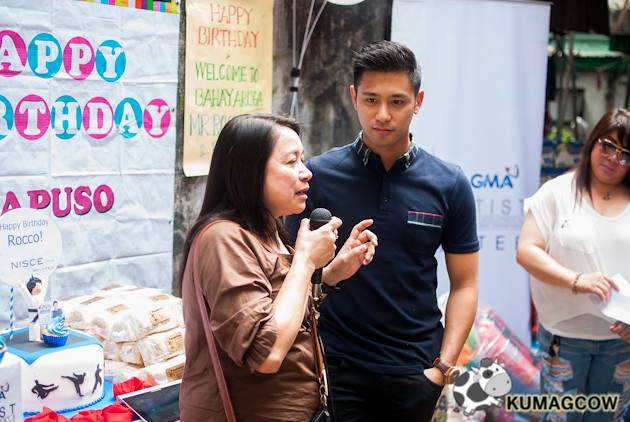 The people from Bahay Aruga couldn't even hold back their tears when they received the supplies and gifts that Rocco gave them during this occasion. They need all the help they can get and wishes more people would be able to help them help more kids in the future. The place is pretty small and aside from rice, they were given school supplies, food and toiletry for which they need now. They also need funding so they can pay for the electricity bill of the shelter since they use light and electric fans to keep the place habitable. 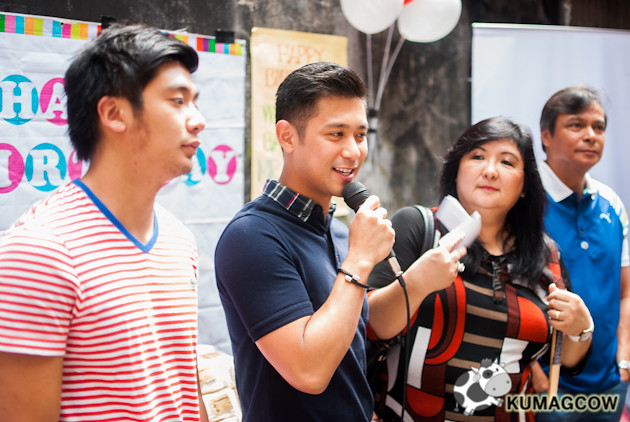 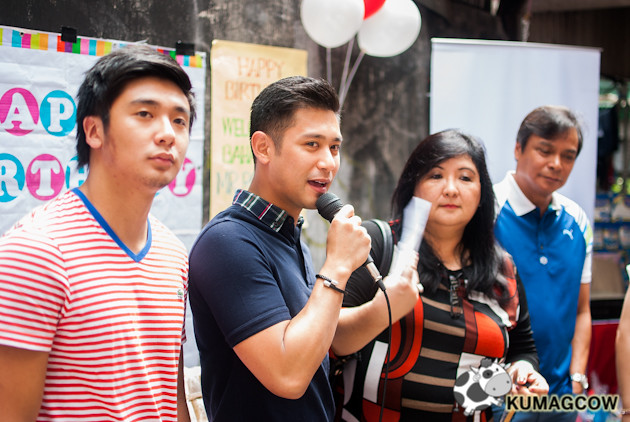 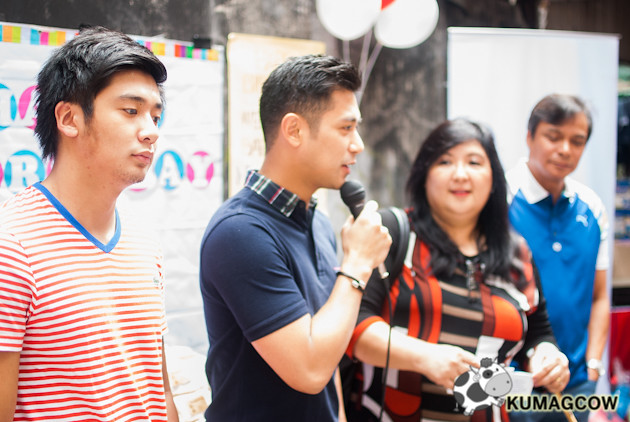 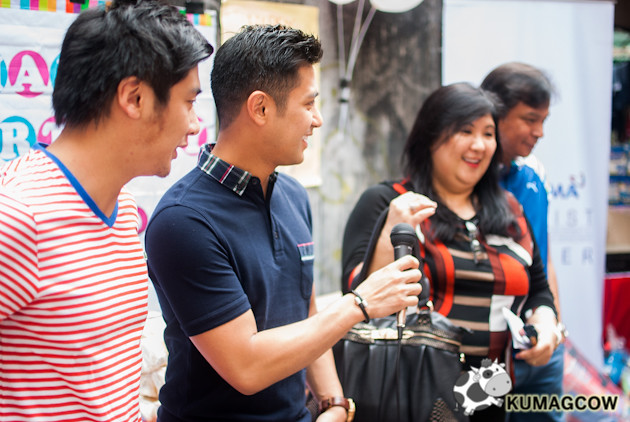 Rocco then began thanking all his sponsors including Nisce, Zagu, Pandelton, Fernando's Bakeshop, Bench and other people who gave their unconditional support so he could help kids in the pediatric cancer shelter which is located right beside Emilio Aguinaldo College. 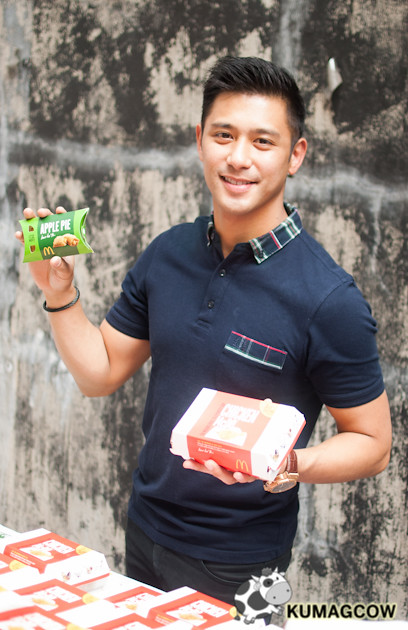 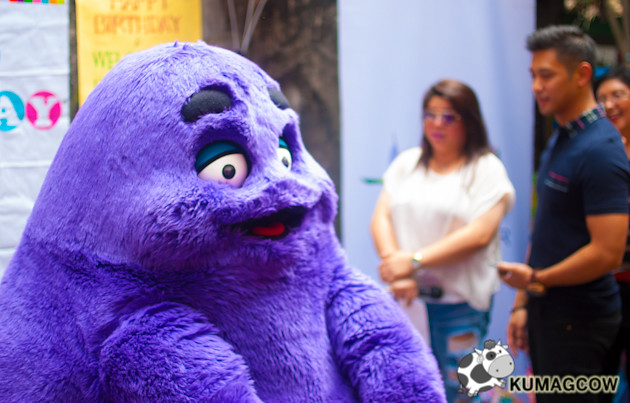 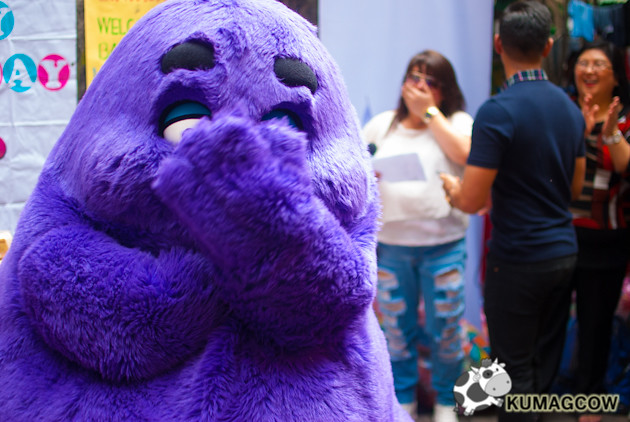 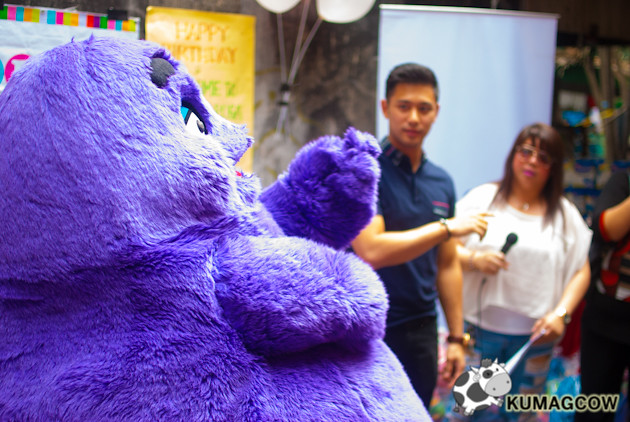 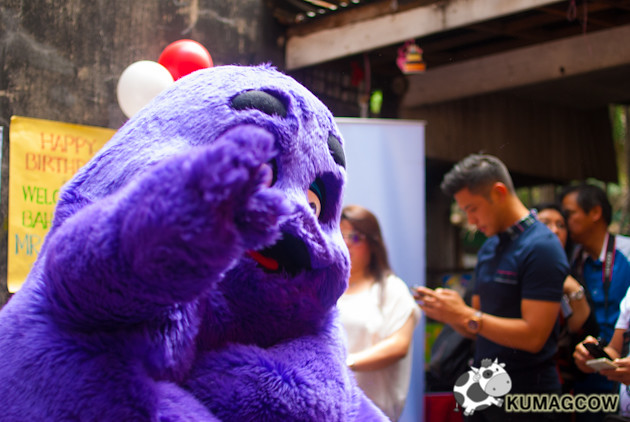 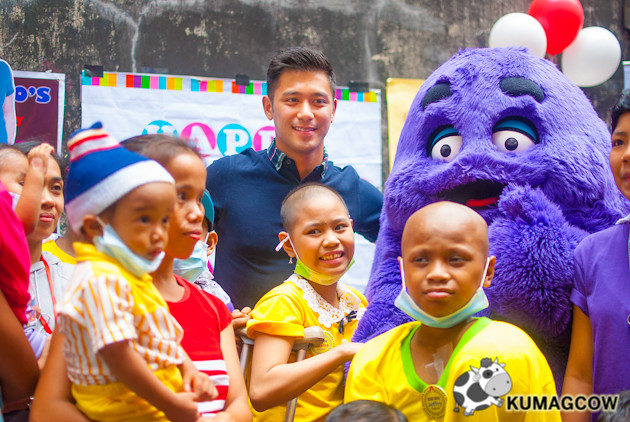 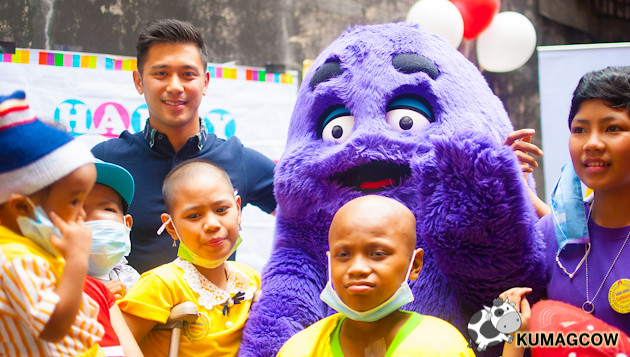 Rocco would also like to thank his Mc Donald's family for sending over lunch for the kids and getting a fun guest to appear and dance for the kids. Hello Grimace! Rocco says the smiles of these kids are really priceless and you can't trade that for anything else in this life. He finds comfort in knowing that he has inspired and helped them in his own little way. 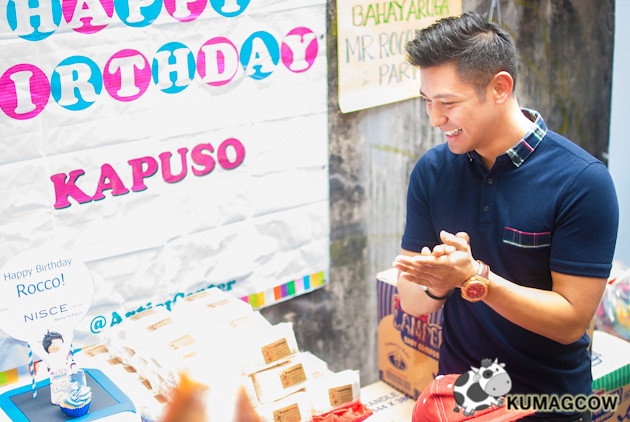 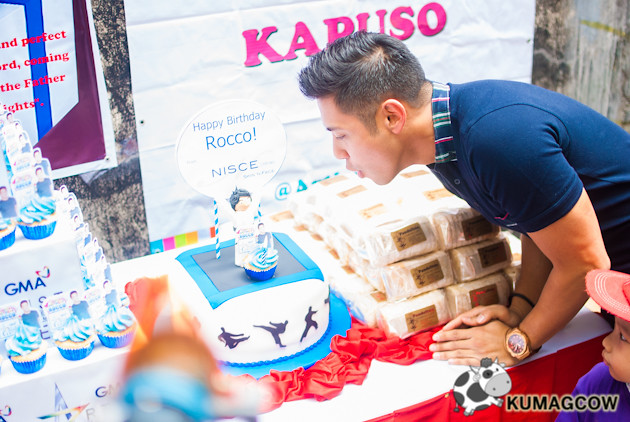 We didn't see Lovi Poe during that afternoon as she might be still busy with other projects. I asked Rocco if he thinks Lovi is the one and he answered very hopeful that she is the one. He's also given interest in saving up for the future and says for now, they're both going to be busy with their careers preparing for that. He wants to also buy a house of his own and get more projects in the next few years. They're both enjoying what they have for now and he only wishes to be able to help more charitable institutions like these in different places in the Philippines. He will work hard for the meantime and see what the future holds for him, his family and future with Lovi.

Aside from that, Rocco is busy with Balut Country. This is their entry to Sinag Maynila, a film festival headed by Brilliante Mendoza. It is still showing today in major SM Cinemas. Please see SM website for schedules!


Happy happy birthday Rocco! Stay blessed and grounded. I am so happy to see you where you are now!

For those who would want to help Bahay Aruga, please proceed to their office which is right beside Emilio Aguinaldo College in Manila. It's the second door on the street so you won't miss it!