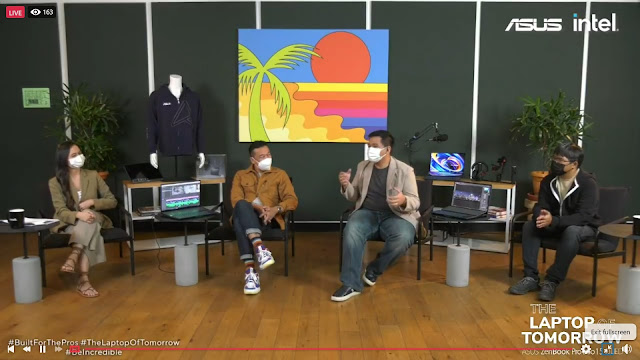 Seeing the new ASUS ZenBook Pro Duo OLED 15 made me drool today. This is indeed the laptop of tomorrow as it is designed for the working man's needs.Built with a 4K OLED HD display and a built in tilting secondary screen on the bottom, it could so much especially for the creatives and professionals who would need more workspace in this day and age.

During the event today, they had premier Wedding Videographer/Visual Storyteller Jason Magbanua (my kumpare hehe) and landscape/travel and architectural photographer Nicco Valenzuela. Thing is, these people live and breathe editing and with the requirements in their industry, they would need something that is powerful and very reliable. The tasks they need to do is no joke as they play around with images and videos that are not only huge, but would need rendering as well. The tilting screen can give you the capability not only to see the whole picture, but lets you multitask. It also displays the most accurate colors which is quite needed in a common day for creatives like us. 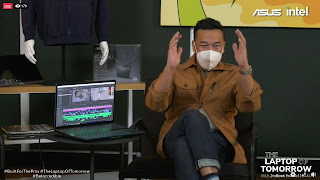 The new ASUS ZenBook Pro Duo OLED 15 box comes with manuals, a pen, the actual unit which was unboxed during Jason's portion. He also took time to edit the video they've shown on the ASUS ZenBook Pro Duo OLED 15. Technically and creatively it puts a lot of pressure with weddings as he's pretty well known for SDE's or same day edits. Nico on the other hand needs to meticulously edit huge images, put a lot of attention to details and remove things that are not pleasing to the eyes and not see a single speck of it in the output. They already have experience with the first generation of ZenBook Pro Duo but this made them realize it has answered even more of their workloads, it still had so many things to improve and they've done that in the new ASUS ZenBook Pro Duo OLED 15. Performance wise, it's super easy to drag and drop things, it boots up fast, and has an i9-10980HK processor that can take on huge tasks you need to do in it. They have an i7-10870H version with the same 32GB RAM and 1TB PCIE storage and an RTX 3070 GPU which can do a lot in one sitting. The tilting screen makes a lot of difference for Jason and Nico, they an put all the notes, the controls, so they can drag and drop on the secondary screen and put the sequence and titles on the bottom. The display will get dedicated on the output, which is so convenient for them since they can use different software at the same time without worrying where to put it when you're working with something else. It's maximum performance with these hardware. The OLED screen is super clear, blacks stay deep, it maintains the color when it should and also doesn't hurt the eyes even if you look at it for a long time (because it has less blue light).

It also looks like a gem with its Celestial Blue color, you don't have to look like a piece of metal when you're this powerful. It stays stylish just like the other laptops from ASUS. I actually own a VivoBook 14 which has proven so good for work and play, with this much power, you can significantly up the game and do even more because it's the got the hardware you need to get the tough job done in a cinch. The UX582LR-H2002TS (Celestial Blue) costs Php 199,995 (15" UHD OLED / i9-10980HK / 32GB RAM / 1TB PCIE Performance / RTX 3070) and the i7 version costs Php 169,995. It is an investment, a really smart one.