This Movie Called "A Girl and A Guy" 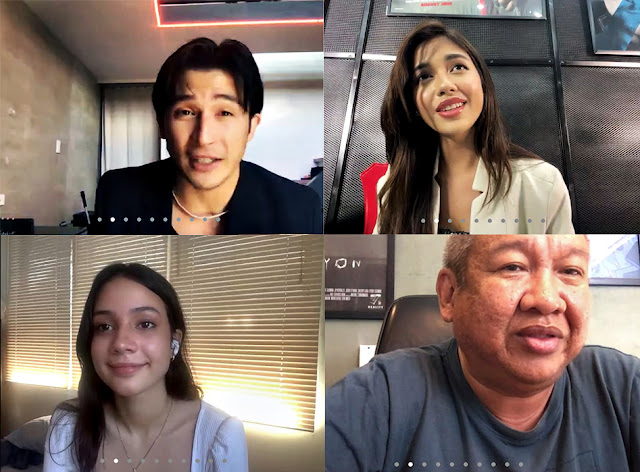 Just got off the mediacon of the movie "A Girl and A Guy". Honestly, I somehow find the title of this movie really weird, but I do get it. With a generation wherein being upfront and different is a norm, I'm not that surprised. It's about young adults finding their way in relationships, connection, and just doing it. It's also designed for a mature audience, the generation NOW and how their lives would be mirrored on this film. The cast includes a mix of stage actors, some newbies, and a few who have been in the industry for quite some time now. The film stars Alexa Miro, Rob Gomez, Pau Benitez, Candice Ramos, Rosh Barman, Sarah Holmes, Carlo Tarobal Emilio Francisco, Chloe Reyes, Roeder Camanag, Donna Cariaga, Marina Benipayo and Shaun Salvador. They have their individual stories, but most of them have paired up for chance, for romance, for relationships and just plain love. Though in between, it's going to tell the story as it is. You'll see tough, fiery and sexy scenes which hasn't been done in Philippine cinema, but that's just the tip of the iceberg because when they show up telling their tales, they're not going to hold back.

Candice Ramos plays Mela, a hardworking woman who focuses on her career and life. "It's always a challenge to do a role like this. The pageant industry in the country is very conservative, it's going to be a shock with what is going to be seen on June 24, but I trust the film making process. I couldn't join  BB. Pilipinas because I posed for FHM a few years back and doing this, I might not be able to do pageants anymore as I understand, we are a pee-dominantly Catholic and conservative country. Rob was easy to work with, even behind the scenes and we're so comfortable with one another and it's also nice to know we don't have malice, we just did the role and it was easy to do it because of Rob."

Chloe Reyes plays Cat and says "With theater, they are very bold to make the art form make sense, you do everything to make it meaningful and this really challenged me as a theater actress."

Shaun Salvador plays JP, representing the guy who wants to find love online. He's a boy next door, charming, but his story has a twist. in this film, he realizes one thing and says "I find that women are also a tease, and it can be reciprocated by men as well."

Carlo Tarobal plays Carlo, a self made guy who's into business. He's got material things, and found out there's something missing from his good life, it's love! He says "I look up to women and girls, I respect them and this movie made me realize what this generation is going through, the story tells people are fearless, women can do things that men are doing."

Rob Gomez plays Raf, a simple guy, introverted, he questions his existence and tries to figure out who he is in other peoples lives. He tries to learn and wants to become the man he wants to be. My family was initially shocked, but I think they understood later on why I'm doing this. I'm really nervous, but I'm excited doing this."

Alexa Miro plays Fiona and she says "I am Fiona here, a go getter, aspiring director, she wants to acheive everything and does 200 percent not just in her career, but her love. She wants to learn about love. Honestly I don't know why I went all out here, but I've been in the industry for a few years and it was just a dream working with this director, plus it's a perfect story and I wanted to take risks, I believe what I'm doing this for. There's a reason why we're telling this story, why it needs to be told, and it's really good to see this happen in the movie."

Rosh Barman plays Gio, "In a way I really relate to my character as he's very tough. I realize that there are women that become really toxic in relationships."

Pau Benitez plays Bea, vegan, conservative, a traditional woman who wants IT to come after marriage. "Well I don't have any regrets joining this film as I think telling the story is essential. It's a challenging role, as an actress you have to be daring."

Sarah Holmes plays Trixie, she says "We have common traits, we're both headstrong girls and go for what we want. I'm still trying to figure out who I am, but she's the type that does everything spontaneously. She's bold and straightforward like me, so in a way it was easy to play this role. Trixie gave me a chance to be myself and made me realize a lot about myself."

The director of the film Erik Matti says "I felt there were no rules in making this movie, it doesn't matter if its about skin, or how hard it is to tell the story. You will be surprised how important it is to be as care free as possible in this new generation. It shows, I'm sure you've seen so many pinoy movies that don't even kiss on screen, you'll see it as it is. You'll feel that they know each other, they bonded, they're comfy and I'm really pleased with that. When we did this, I wrote down all my thoughts and gave it to the writer. I was finishing OTJ during this time, we went back to work last June/July last year and Upstream tappped us to show an original work, and this was perfect for that. It's perfect for the Gen Z, the millennial, the pandemic put them in that state and we're telling that story. I'm happy that we have finished this really responsibly doing this as a film maker, without thinking it's going to be judged or censored. It's going to be told as it is. With this movie, I just hope they know where I'm coming from. I didn't want to do romcom because there are a lot of people doing that already, and I wanted to explore the side of the younger set of people. It's a way to know what can be done than just the normal story of boy meets girl, this will be discussed in A Girl and a Guy. It's no longer about us, we need to unwind the backward thinking. There's another side we can present and gravitate towards that. You're gonna see how they deal with experiments, with the same s3x or gender, or the opposite, or becoming fluid. Globe Studios and Regal decided we will produce this, I just finished one on HBO and eventually we got permits to shoot them as there are some crowd scenes, we had to test people and do this. I was relying on my cast to tell about the generation. On set I had to do that so they would do a real depiction to the situation and apply this to their characters. I worked with a lot of young actors and they've been conscious about how they would look in the movie. I think the trust I got from these bunch is heartwarming, it's so good that they put their trust on me. To use this well, when they saw the final product, they knew the characters too well, if it's written by me, Anj Pessumal made it reveal that the kind of inner mind of this generation is shown. It's their own world, their own way of doing things. There are several scenes that I had to ask them, to edit it was so hard because it was a fight, it had so much material that it was so hard to shorten things. I had to tell a story of a private moment, while they were undressed they had to fight, they were GF and BF, and we didn't have to calculate things because it's like real life."

You can view this on UPSTREAM.ph starting June 24, 2021. You can purchase tickets ahead of time and this is intended for an R-18 audience. You'll find out why it had to be told in a medium that can accommodate it. This is an UPSTREAM Originals project, there will be more. This one will push buttons, be out of the box, because it is an Erik Matti masterpiece.