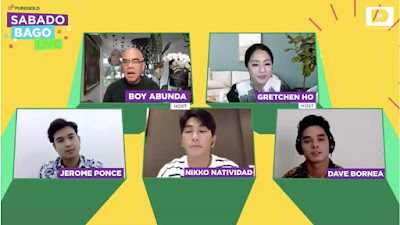 It's a sitcom that will be seen exclusively on the Puregold Channel meant to spread good vibes as the title suggests.  Jawo, Daks and Zeus, sons of Aling Perling will be making your day as they bring situational and family comedy on YouTube. Present in the occasion was Writer Joaquin Acosta, Creative Head Noel Nuguit and Sherwin Buenavida who did the Teleplay. Don Cuaresma says "This is like an homage to previous shows like Palibhasa Lalake, the golden years of sitcoms in the 90's. Dave Bornea, Nikko and Jerome couldn't be combined on TV, so we did it on digital and that won't happen in other mediums because they are after all from other channels. We're locked in doing this, so they really bonded while making this project. We researched about what digital audiences watch, it would converge any age bracket because even the not so young ones are now on Facebook. We are aware of what we want to put on the series."

Noel says "The 90's sitcoms were really an inspiration doing this. They have their own counterparts, it's interesting because it's comedy, it's fun, but it has heart."

Sherwin adds "The humor online is different in mainstream, but if it is funny, it transcends platforms. I feel the sitcom concentrates on friendship and family, just on a different platform."

Joaquin says "Make sure you watch out for comedy on this show, the story itself is relatable and you'll love them for who they are."

Carmi Martin says "I'm so involved with how this half Korean-Pinay character was created and interpreted. It'll be very fun to see how she will be connecting with the other actors. I'm happy to be part of the GV Boys group to give even more entertainment online. I'm a little crazed, but even if these actors are just new, they're very good at what they do. I do have experience with Mr. M back in the day, I want soaps, but my forte is really sitcoms.  It's what we also need during the pandemic, we need something fun! I learned that you have to be ready, to give your best because you have window hours, you have to finish sequences with the sunlight still there, it was fun and a little better working in this setup, I feel it's perfect for me even if we didn't have air conditioning because it was all open air. It was well planned shooting for this sitcom."


Wilma Doesnt adds "I'm half Japanese here. It'll be crazy because I have someone to call my own, a loveteam. The three boys are really good, I fell a little old because they're very nice, even brings me chairs when I need it. I was really under Mr. M and I did Richard Loves Lucy. When I saw Richard, I cried because I was starstruck, I must admit, I really did have a crush on him back in the day. The pandemic made us realize we have a lot to look forward to, we finished it earlier or on time, I saved on gas, it's the reality because you can concentrate on the work at hand. You've got lots of time with your co actors, it made us comfortable because we ate together, we know how to throw lines easy."

Jerome says "There were a few artists who auditioned for this project, they cut down to three and I think we really just fit the role. I play Jawo, a little crazy, hopeless romantic. This is different from my BL series, you have to bond with your co actors so you know their comedic timing, we had to give each other space so we know when to throw a joke. We had lots of energy.

Nikko adds "I didn't audition, but I think they saw me on IG and saw my humor. I think that's what sold them to get me for the project. Dave is really good, we just talk about his salary because he's from another network (he kids). I play Daks, (Eugene or Hugene hence the name). I really had a bad investment scam during the pandemic, I had panic attacks and depression, but I had my wife and kid who were there for me during the whole ordeal. They were my rock, I just put everything to God. I post everything naughty on IG because I'm in a good mood. If I'm not okay, it's like an outlet, I think we all go through that. I think it's all fun.

Dave says "I auditioned for the role and I'm glad I got in. I already have gotten to work with Jerome in an endorsement, but Nikko was just so cool and funny so we didn't have to work so hard just to get along. Zeus is a Filipino American, he's got a secret that will be revealed in the latter part of the series. In the movie I had where I won an award, I played the young versions of them. Being part of that I felt really honored because I saw how they work. They pay attention to what the director wants them to do. In GV Boys, it's light, the energy is happy, we just help each other. Ms. Carmi and Ms. Wilma also share their experiences, and they're very willing to do that."

GV Boys will start on July 10 Saturday at 10PM and will be seen both on the Puregold Facebook page and YouTube Channel. Spread good vibes while watching! It's FREE, you can also win prizes if you watch it and participate in a few games while the sitcom shows on these platforms.