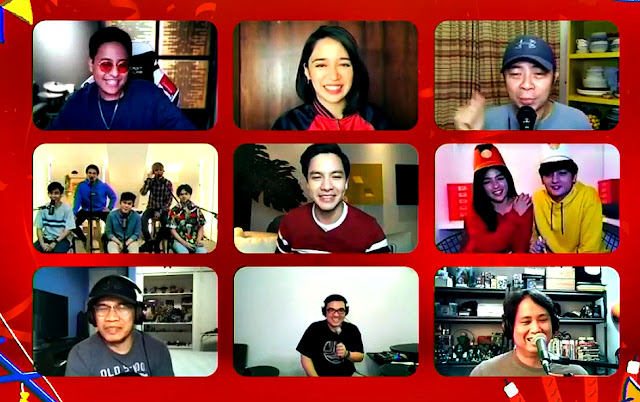 This year's Independence Day rites wasn't all sad spent in the 4 corners of your home as TM channeled all the fun on social media last June 12th. The TM Double Dekada Pinoy Fiesta was streamed live via the TM Tambayan Facebook Page together with some of the country's brightest stars. TM is also celebrating their 20th year in the country in September, but they are starting the countdown as early as now with a big bang!


To start off, they've introduced their new Ka-TM's which includes teen sensations Seth Fedelin and Andrea Brillantes (also known as SethDrea) and the one and only Asia's Multimedia Star and Pambansang Bae Alden Richards. To join in the fun, the virtual stage was filled with the music and artistry of The Juans, the phenomenal SB19, the cool Matthaios and social media stars Donnalyn Bartolome and Riva Quenery. Add to that, the funny and crazy bunch of Parokya ni Edgar which had us all laughing hard during their segment. Viewers also got first dibs seeing the newest TM Doble Dekada music video starring the happy bunch of ka-TMs showcasing the latest campaign "Doble Dekada Sa Samahang Pina-Easy".


Globe's VP for Consumer Mobile Business Kristelle Dizon says "TM has worked tirelessly to make this 20th anniversary celebration the best one ever. We may have double the challenges this year, but we're going to fight together, carry on with our lives. TM is here, and we'll fight with you!"


Now don't fret because the festivities have just started. There will be TM Doble Dekada Raffle where subscribers would have the chance to win over 20 Million pesos worth of prizes including 5G mobile phones, FunAral Tuition assistance plus FunKabuhayan Puregold Grocery Package weekly. It will run from May 18th to September 30, 2021 (that's 20 weeks) so you still got a bit more time to join it. On the grand draw, ka-TM's get the chance to win 2 Million pesos and 500K FunKabuhayan package in the Grand Draw. It will happen on October 5 so make sure you're loading up regularly (It takes 10 pesos to do that).

All you got to do now is download the TM app on Gogle Play Store or the App store to register. Don't tell me I didn't tell you, because I just did! To know more about it, just text the keyword TMDOBLEDEKADA INFO to 8080. That's also FREE, so how can you not do that!